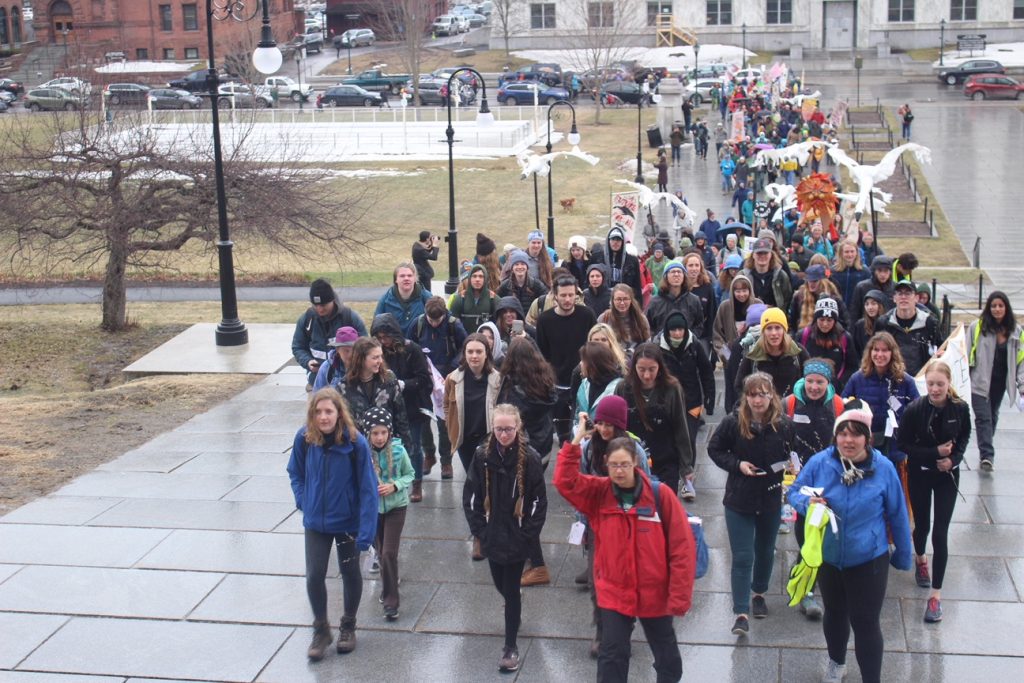 YOUNG AND FOR THE EARTH : A crowd of a few hundred mostly young people gathered at the Statehouse on Tuesday to push for more action on climate change. Some of them traveled up to 65 miles to draw attention to their cause.

MONTPELIER — Hundreds of climate activists marched the streets of Montpelier on Tuesday, braving sleet and rain just to urge lawmakers to take action against global warming.

In all, they had traveled over 65 miles, starting in Middlebury.

“During the journey of over 60 miles, walkers highlighted the climate consequences of the build-out of the Vermont Gas pipeline, while also celebrating and promoting examples of climate solutions,” said a statement from 350Vermont.

They arrived on the Statehouse steps singing songs and chants, and flooded the hallways with fists raised. They took turns reading out their core beliefs in the main lobby.

“Please protect our soils and remember that we are on stolen ground,” one person said.

H.175 aims to “prohibit the exercise of eminent domain by utilities for purposes of fossil fuel infrastructure.” It also is in the House energy committee.

Zac Rudge, spokesperson for 350Vermont, told True North that the 65-mile journey was helped by supporters from local communities who provided temporary lodging.

“We stayed in churches, we stayed in town halls, we stayed in people’s homes,” he said. “Each community we went to provided a big potluck, which was amazing. Most of the communities we visited along the way centered around particular resistance against fossil fuel infrastructure.”

He noted Bristol and Hinesburg, which have been engaged in political resistance to a natural gas pipeline.

Julie Macuga, 350Vermont’s extreme energy organizer, issued a statement calling for a ban on all carbon-based energy infrastructure. This would include pipelines.

“Legislators are not acting swiftly to pass a ban on new fossil fuel infrastructure or other policies commensurate with the crisis at hand,” she said. “It can’t wait till next session.”

“People shouldn’t have to walk all the way across Vermont to get action on climate,” he said, adding that lawmakers “have essentially been climate delayers.”

Leif Taranta, of Middlebury, did the entire walk from start to finish and took on a role as spokesperson for the march. He was asked by True North about the higher costs for green energy alternatives.

“The idea behind the Green New Deal is that it should not be a burden on any person, especially on low-income people, especially people of color and indigenous people,” he said. “These people have already been burdened by the systems we are living in, and the transition away from fossil fuels should be done in a way that helps people instead of causing extra burden on them. So we are really urging this in an economically just way.”

“So it’s really, do you wanna put the expense into creating a better world that works for everyone, or do you wanna pay later and have a disaster?”

Another big renewable push discussed by marchers was home weatherization. Heather Stevenson of 350Vermont told True North about that initiative.

“It’s gonna bring in jobs. It’s gonna save money, because, of every dollar we spend on fossil fuels, 70 cents goes out of state,” she said. “I think we should be spending money on Vermonters.

“When we do weatherization for a home, it saves that homeowner $500 which they are then spending on their  local economy and child care.”