Gov. Charlie Baker of Massachusetts on Monday announced an executive order limiting indoor and outdoor crowd sizes and authorizing police to levy $500 fines for each person in attendance above the limit.

Will Vermont follow suit with something similar? Gov. Phil Scott will no doubt be asked this question at his press conference Friday. 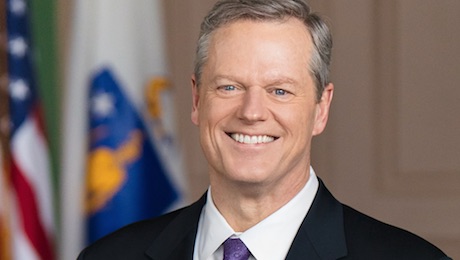 Baker’s remark that residents had become too “complacent” as the pandemic stretches on resembles comments made by Scott and Vermont Health Commissioner Mark Levine at last Friday’s press conference. Scott warned Vermonters to not allow “pandemic fatigue” to make us complacent. “If we want to keep our schools and economy open, we need to double down on our efforts to control this virus,” he said.

“If we see the uptick….we will be forced to do something about it, and I’m not sure what that will be yet,” Scott said. “But it’s nothing we’re talking about now.”

“Now we’re seeing what happens when we let our guard down,” Health Commissioner Mark Levine chimed in.

Like the rest of the country in recent weeks as people spend more time indoors, Vermont and Massachusetts both have seen increases in Covid cases and hospitalizations, although the Bay State has fared far worse both in total numbers and per capita. Massachusetts Covid ICU cases jumped from 47 Sept. 9 to 113 November 1, the executive order said. 88% of new clusters since September 27 stem from household and social gathering, “which warrants heightened caution” and the new restrictions, Baker said in the executive order. Massachusetts has the second worst Covid-19 death rate per 100,000 (about 1,400) in the nation, exceeded only by New Jersey. Vermont has the lowest Covid death rate per 100K. 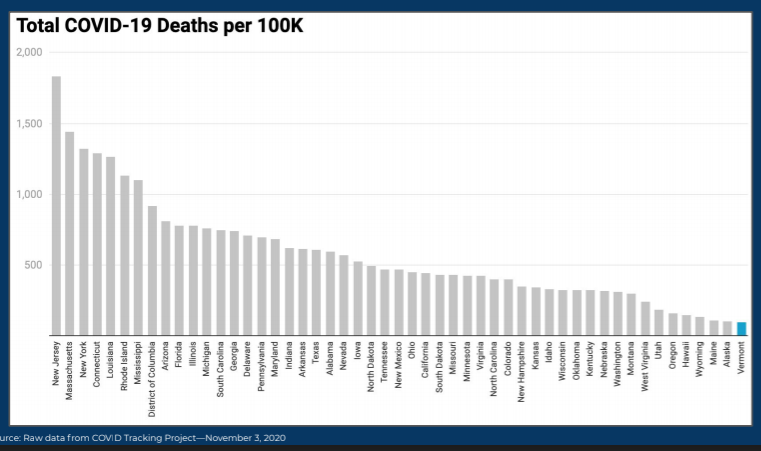 Although nowhere near the scale of Massachusetts, Vermont Covid hospitalizations and ICU admissions also have increased – from zero to less than 10. Unlike Vermont, however, no Massachusetts hospitals were hit with cyberattacks last week.

The new order also requires that organizers of gatherings report known positive COVID-19 cases to the local health department in that community and requires organizers to cooperate with contact tracing. The gatherings order authorizes continued enforcement by local health and police departments and specifies that fines for violating the gathering order will be $500 for each person above the limit at a particular gathering.

Religious and political gatherings are exempted from the new restrictions.