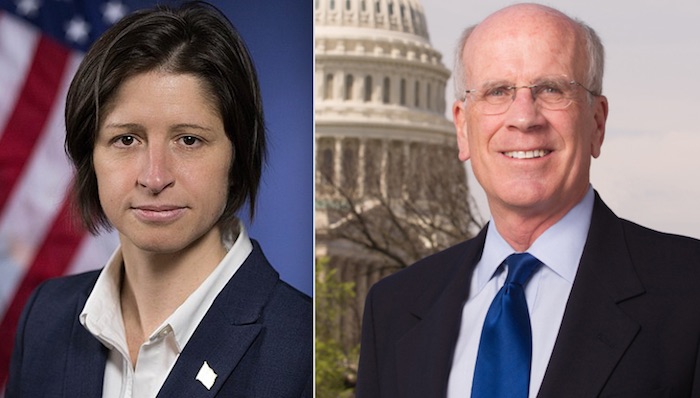 Morning Drive host Kurt Wright asked the question of the 2022 Senate race, which at this early point looks like a battle between Democrat Rep. Peter Welch, right, and Republican Christina Nolan.

Tuesday, former U.S. Attorney Christina Nolan announced her candidacy for U.S. Senate on WVMT’s Morning Drive. Almost immediately she faced what will likely be the toughest question of her campaign.

Host Kurt Wright let Nolan announce her news and thank Sen. Patrick Leahy for nominating her as U.S. Attorney in 2017. Then the politically savvy Wright asked the question on many minds (at about the 20:40 mark): “What you will hear from your opponent over and over is, ‘Do we want to turn this seat over to any Republican, which could potentially turn the U.S. Senate over to Mitch McConnell?’”

Wright asked the question of the 2022 Senate race, which at this early point looks like a battle between Rep. Peter Welch (D) and the Republican Nolan. Never mind that the Senate is deadlocked and a party change in any of the many 2022 Senate elections would mean a change of leadership. Vermonters are asking that question. Here’s how Nolan responded.

“Vermonters want a person to go to Washington to do the right thing and get something done,” Nolan said. “I am an independent, non-traditional Republican, a New England Republican. [Maine U.S. Senator] Susan Collins is someone I’m a big fan of.”

She also appealed to the many ‘middle of the road’ Vermonters who see Washington as gridlocked and going nowhere in a long, dark tunnel of political hatred.

“Here’s what I pledge to Vermonters: I will go down and make compromises,” Nolan continued. “I won’t work for the Republican party. I will work for you. You see politicians who think they work for a party or an ideology. Peter Welch votes with his party 100% of the time and caucuses with the extreme wing of his party.”

46 thoughts on “Christina Nolan answers ‘The Question’ about her campaign for U.S. Senate”