This commentary is by Chris Bradley, of Northfield. He is a registered lobbyist with the Vermont secretary of state on behalf of the Vermont Federation of Sportsman’s Clubs, where he is president and executive director.

When we consider Vermont, we must recognize that the vast majority of Vermont is rural.

We also must recognize that Vermont has a chronic issue with the proper staffing of law enforcement, such that Vermont typically has one of the lowest Full-Time Equivalent (FTE) law enforcement officers per 100,000 residents in the nation. For 2019 we were the absolute lowest. 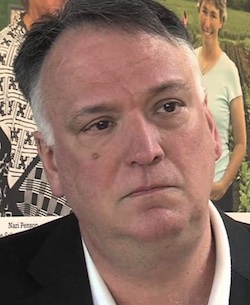 Chris Bradley, president and executive director of the Vermont Federation of Sportsman’s Clubs

Today approximately 200 Vermont towns rely solely on the Vermont State Police (VSP) to provide law enforcement coverage, with that equating to approximately 50% of Vermont’s population and approximately 90% of Vermont’s land mass. Further, VSP’s coverage is not 24 hours. By necessity the VSP only runs two 10-hour shifts, leaving 2 a.m. to 6 a.m. with “on call” coverage only. Finally: VSP is very concernedly short-staffed, as are many police departments.

Depending on when a crime happens, what may be happening at the same time elsewhere, not to mention the weather, it could be quite a long time before law enforcement can get to the scene of a Vermont crime.

A great many Vermonters know that not only can they be the first person affected by crime, they also know that they will likely be their own first responder. A high percentage of Vermont homes have firearms in them, and the vast, vast majority of the Vermonters who own those firearms know how to safely and competently handle them. Combined, these two facts go a long way to explain why Vermont is consistently one of the safest states in the nation when it comes to both violent crime and property crime.

The logic there is pretty simple. Criminals want easy victims; they do not want armed adversaries. Yet there are those who will ridicule the notion that a good guy with a gun can stop a bad guy with a gun. Given that we cannot seem to stop bad guys from getting guns, and we have certainly tried hard at that goal, I suggest that enacting laws that force good guys to be disarmed is simply providing for more easy victims. And aren’t those people really saying: “A bad guy with a gun should always get their way?”

We have all been inundated with the media stories where completely innocent people become victims of gun violence, and there appears to be no shortage of people who are intent on committing such heinous and unconscionable acts.

But, how often do you hear of lives being saved, or crime being stopped cold, because of an honest citizen being armed? Just about never — which could lead someone to believe that defensive use almost never happens.

When Barack Obama was president, he issued a number of executive orders, one of which directed the Centers of Disease Control (CDC) to study the causes and prevention of gun violence. That study was then sub-contracted to the Institute of Medicine and National Research Council – two highly respected research organizations.

The resulting study found that the defensive use of firearms was a “common occurrence.” The study states: “Almost all national survey estimates indicate that defensive gun uses by victims are at least as common as offensive uses by criminals, with estimates of annual uses ranging from about 500,000 to more than 3 million per year, in the context of about 300,000 violent crimes involving firearms in 2008.”

We can address gun violence by strictly enforcing the firearm laws already on the books, laws which dictate strict sentences for when a crime is committed with a gun. We need to retain cash bail, not allow criminals to simply walk free. Further, we need our legal system to aggressively prosecute these crimes, not allow them to be pled away because they are purposefully harsh.

We can do these things today, right now, and we will see measurable results.

8 thoughts on “Chris Bradley: Self defense in Vermont”