Historically, the Charlotte Grange acted as a society of farmers, a place for them to socialize, sell their wares and seek support from one another.

Today, Grange president Mike Walker still wants Charlotters to honor the hall’s history, but he also wants them to see the organization in a new light: As a place for the whole community, not just farmers. 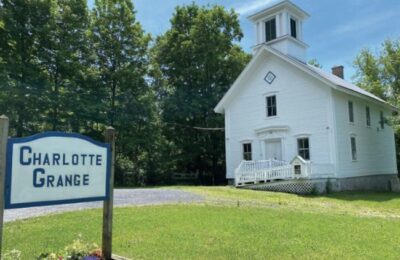 “We want to be known as an organization that actually does things,” Walker said. “It’s more important that people enjoy the activities and get the benefit of the activities.”

The Charlotte Grange runs a slew of programs throughout the year. In February the group held a meet-and-greet night for local candidates so townspeople could ask questions of office-seekers. Last month, Grange members held a Memorial Day celebration to honor the human cost of war by recognizing veterans and Charlotters who’ve served in the Armed Forces.

Those are just two of the projects the Grange has taken on in Charlotte — and the group has even more planned.

The Grange Hall on Spear Street in East Charlotte was built in 1870 as a debating hall by the Young Men’s Literary Society. For years afterward it served as a schoolhouse.

But since 1958 it’s been home to the Charlotte Grange, which was founded in 1908. Granges, historically, were agricultural societies that worked as a social and support group for farmers. Farmers could talk to one another in a central place and buy and sell seed supplies and machinery. At its peak the group boasted as many as 120 members.

Today the Grange has about 20 members, and the group has expanded beyond agriculture. But members still try to honor their history.

One way they’re doing that is by creating a Charlotte farm map.

The project is an effort to promote the town’s remaining farms and began after a conversation with local farmers last December. 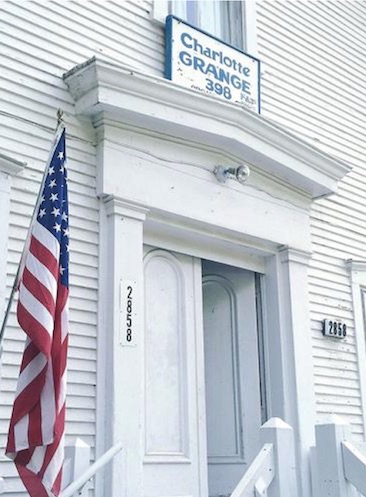 The historic building’s grand entrance. The building has been in use as a grange since 1908.

The Grange decided to put together a double-sided map showing the location and contact details for local farms selling directly to consumers. The map isn’t finished yet, but when it is the Grange hopes it will help boost traffic to farms and help Charlotte residents access local food.

Dinnan was also involved in the Charlotte Hand-Me-Downs project, another of the Grange’s latest efforts, which helps Charlotte residents get clothes when they need them.

“In Charlotte, we have a lot of extra clothes that are finished being used, and we have folks who need them,” she said. “To keep those resources here and redistribute them in a way that’s helpful was the inspiration behind the effort.”

Working with the Charlotte Food Shelf, volunteers collect clothing donations and match them with families in need. Grange volunteers gather and sort the clothes while people from the food shelf match clothes with families.

Walker is particularly excited about one program this summer: Grange on the Green music series. The Grange, in collaboration with the local library, puts on free concerts for residents. Three concerts are scheduled going forward on July 14, Aug. 11 and Sept. 8.

As the community in Charlotte continues to grow and change, Grange leaders hope their organization grows too.

Grange members want to make improvements to the hall, such as its heating system. The group hosted an auction in April to raise money for building maintenance, and in the past the organization has worked with the Preservation Trust of Vermont to restore windows and repaint the building’s exterior.

The hope is that over time the hall can act as a hub for community life in East Charlotte again.

“I hope that the name of the Grange will still be seen and recognized by the community,” Walker said. “But more important than the name, it’s actually the activities that we do and the people that we reach.”