This article by Lou Varricchio originally appeared at Watchdog.org

In the wake of being shouted down by Middlebury College students on March 2, author and scholar Charles Murray has continued to speak out about the disruption and violence. But Vermont lawmakers, Middlebury students and administrators have been unusually quiet. 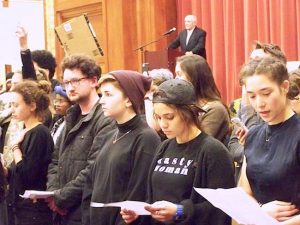 Former publisher, editor and lobbyist Guy Page of Page Communications, a long-time observer of the Vermont legislative scene, said the student protest and assault on Murray didn’t appear to cross the minds of government leaders in Montpelier.

“To my knowledge, there have been no resolutions introduced to condemn the incident; no calls by civil-rights minded legislators to investigate; no condemnation by the attorney general; in fact, no mention at all [that I have heard],” Page noted. “I did overhear a couple of reporters casually discuss the pros and cons of the rationale given by the protesters who silenced Murray: that they had as much right to speak as he did.”

While Murray’s appearance on the Middlebury campus received international news coverage, student government — like state government — didn’t have much to say about student behavior during the protest. College administrators have also been quiet in public regarding what disciplinary actions might be taken, although Murray was branded as both a “troll” and a new “martyr to the cause of free speech” this month by Middlebury scholar and climate activist Bill McKibben.

Murray, the W.H. Brady Scholar at the American Enterprise Institute, a Washington, D.C.-based conservative think tank, was invited to Middlebury to discuss his 1994 book, Losing Ground, by a student-run club. A loud and disruptive protest ensued, both outside and inside the student center auditorium, and Murray was shouted off the stage. Allison Stanger, professor of international politics and economics, was injured in the melee that followed.

A loud protest inside Middlebury’s McCullough Student Center auditorium included students turning their backs on Murray when he walked on stage to present his lecture. With their backs to the stage, students chanted, read prepared scripts, and held up posters with protest slogans such as “White Supremacy is the Enemy” and  “Race is a Construct” and “F— Eugenics.”

Murray eventually discussed his research off stage with Stanger, who was serving as his campus host, via live video streaming. Following the chaotic event, both Murray and Stanger were confronted by protesters outside and Stanger was assaulted. Since the incident, she has visited Porter Hospital in Middlebury twice for the treatment of a neck injury and concussion resulting from the incident. Murray was unharmed.

In the intervening weeks, Murray has gone public with his thoughts on what was only the latest in a long string of campus assaults on free speech, and he is pointing a finger at multiple miscreants.

While Middlebury students come in for their share of Murray’s ire, on his “Society and Culture” blog on the AEI website, he also takes on the Southern Poverty Law Center.

The SPLC, which has long been a severe critic of Murray’s work, particularly The Bell Curve: Intelligence and Class Structure in American Life, co-authored with Richard J. Hernstein.

Murray analyzes the Southern Poverty Law Center’s online “Extremist Files” profile about him, which characterizes the author as an extremist and racist. The SPLC claims were parroted by Middlebury students who opposed Murray’s appearance on campus earlier this month.

“For years, the protesters I have encountered at colleges have gotten their information about why I am a terrible person from the Charles Murray page at the website of the Southern Poverty Law Center. For all of those years, I have ignored that material. But in the aftermath of the Middlebury affair and the attendant publicity citing the SPLC’s allegations that I am a white nationalist, white supremacist, racist, and sexist, people who wonder whether these allegations have any basis need to know what I have to say about them.”

What he has to say about them took on the form of a challenge.

“You have some material relating to ‘intellectually superior’ (though it relates to men in general, not white men) at the end of the article. I can’t find anything to document ‘psychologically and morally superior’ anywhere in … (my) work, and I have read every word … (I’ve) ever written. Please supply references,” Murray wrote.

Conservative commentator David French, writing at National Review this week, said the SPLC deserves some of the blame for stirring up student and faculty extremism at Middlebury.

“The once-valuable — and now hateful and vile — Southern Poverty Law Center has long labeled Charles Murray an ‘extremist’ and a ‘white nationalist’. The SPLC’s label not only contributes to lazy headlines and borderline-slanderous reporting, it also seems to have partly inspired the violent attack against Murray at Middlebury College,” French wrote.

In the days after his appearance, Murray wrote that the “penalties imposed on the protesters need to be many and severe.” But he did not expect them to be. “The pressure to refrain from suspending and expelling large numbers of students will be intense. Parents will bombard the administration with explanations of why their little darlings are special people whose hearts were in the right place. Faculty and media on the left will urge that no one inside the lecture hall be penalized because shouting down awful people like me is morally appropriate. The administration has to recognize that severe sanctions will make the college less attractive to many prospective applicants.”

Last week, Murray appeared at Columbia University in New York City for a lecture about his books, academic free speech and the widely publicized Vermont visit and protest.

While the author was the target of protesters on the Ivy League campus, he received a far more civil welcome than at Middlebury. About 150 faculty members signed a letter March 20 in the Columbia Spectator, the campus newspaper, critical of his work but supporting his right to speak on campus.

He spoke Tuesday night at the University of Notre Dame, encountering “impassioned” but peaceful protests.