The Independence Day celebration on the National Mall is always a big, crowded event with music, celebrities, and fireworks and artillery being fired off along the Potomac River at the end of the evening.

But this year, my wife and I, along with one of our daughters, got a wonderful and more intimate preview of the spirit of July Fourth when we attended the “Evening Parade” at the U.S. Marine Corps Barracks in the District of Columbia on the Friday before our country’s grand birthday celebration.

The Marine Barracks are just southeast of the U.S. Capitol—the coliseum where our political gladiators fight. The Barracks are known as the “Oldest Post of the Corps” because it is the oldest Marine base in the country.

Today, they are located on the very busy 8th Street, Southeast, which is full of great restaurants and sidewalk cafes and one of the best places to eat in Washington, not what you would expect to find at or near a military base.

The post dates from 1801 and the site was picked out by Thomas Jefferson as he was riding his horse through the District with Lt. Col. William Ward Burrows, the second Commandant of the Marine Corps.

They picked the site because it was close to the Washington Navy Yard and was within easy marching distance of the Capitol.

The Barracks are arranged in a quadrangle with a large, grassy parade ground in the middle and a historic home at one end.

The “Home of the Commandant,” built in 1806, is the oldest public building in continuous use in Washington, D.C.

With only two exceptions, every commandant of the Marines has lived there. It was one of the few buildings not burned by the British Army when they invaded Washington during the War of 1812.

Legend has it that the British commanders were so impressed by the ferocity of the Marines at the Battle of Bladensburg that they ordered the house spared as a gesture of respect. It is now designated as a historic landmark.

Every Friday, from May through the end of August, the Marines conduct an Evening Parade to which the public is invited.

It includes the Marine Corps Color Guard, music by the Marine Corps Drum and Bugle Corps, the “President’s Own” Marine Band, and the Marine Corps Silent Drill Platoon. It even includes an appearance by Cpl. Chesty XIV, the official bulldog mascot of the Marine Barracks. He is named after Lt. Gen. Lewis “Chesty” Puller, the most highly decorated Marine in history, and someone known for his more pithy quotes, such as: “So they’ve got us surrounded. Good! Now we can fire in any direction; those b*****ds won’t get away this time!”

We were lucky enough to score three tickets for the June 29 ceremony and walked into the parade ground filled with Marines in their dress uniforms on a hot, sultry summer evening. 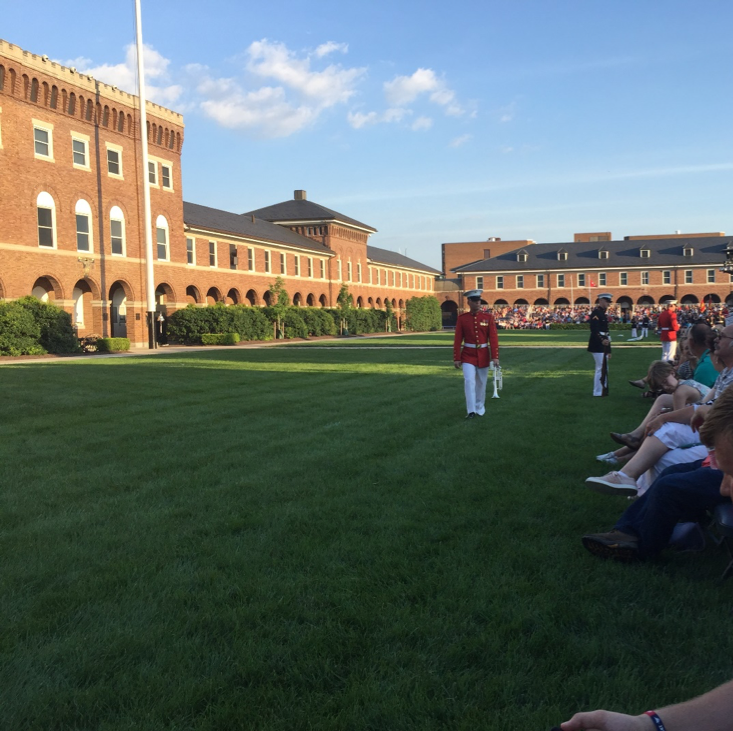 Among the guests was a group of veterans, almost all of them in wheelchairs, accompanied by their families, who had been brought to Washington by Honor Flight Nevada, a program that brings veterans to the nation’s capital. 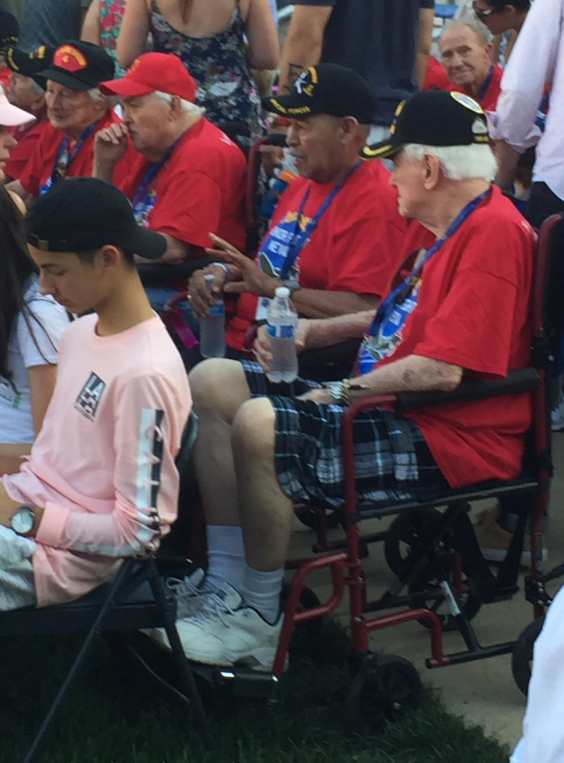 Marines and veterans will always get to the point! 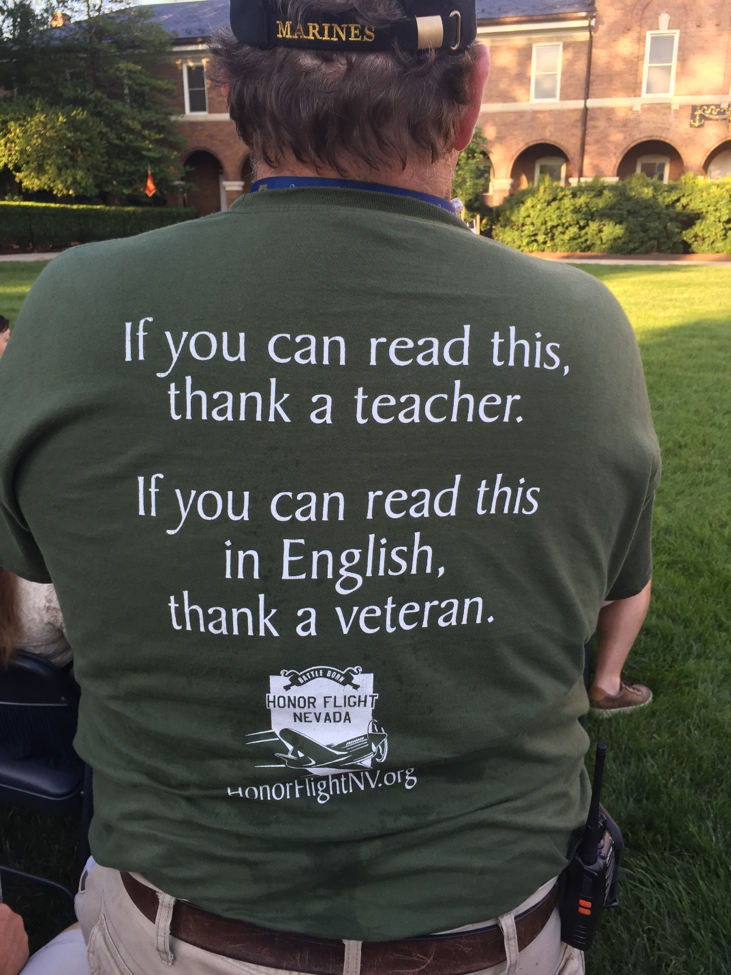 I love the marching songs of John Philip Sousa and there is nothing like hearing “Stars and Stripes Forever” being played at the Marine Barracks where Sousa resided when he headed the U.S. Marine Band and wrote his music. It is the official national march of the U.S. and probably Sousa’s greatest composition. It stirs my patriotic heartstrings every time I hear it. 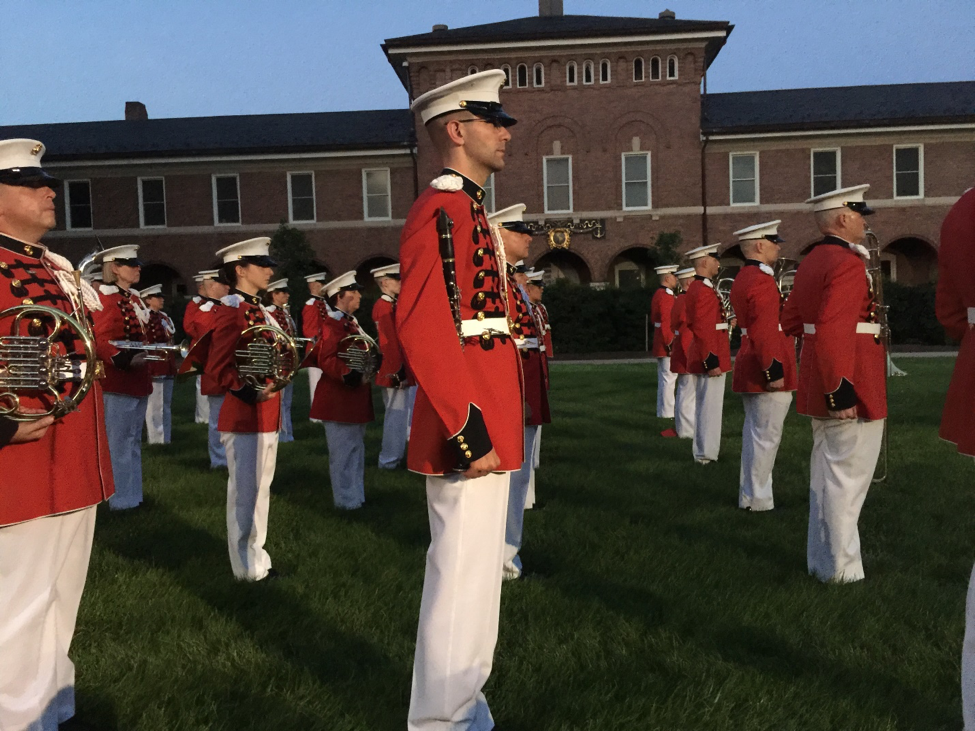 From the Drum and Bugle Corps’ music as it marches across the parade ground, to the unbelievable performance put on by the Silent Drill Platoon, it is an evening you don’t want to miss.  As the sun was starting to set and the spotlights came on, you could see the bayonets–yes, the Silent Drill Team does its performance with bayonets attached–sparkling as the lights caught them and the members of the drill team were twirling and throwing their rifles in the air. 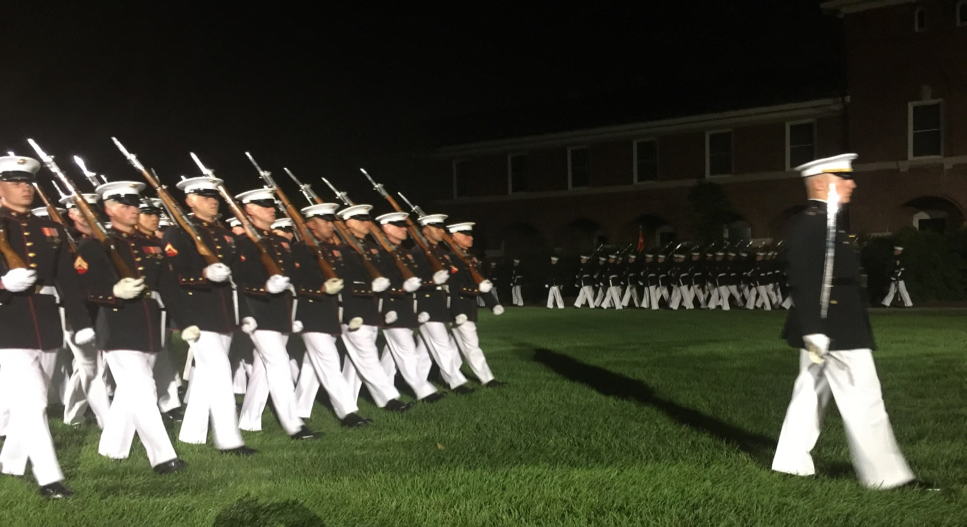 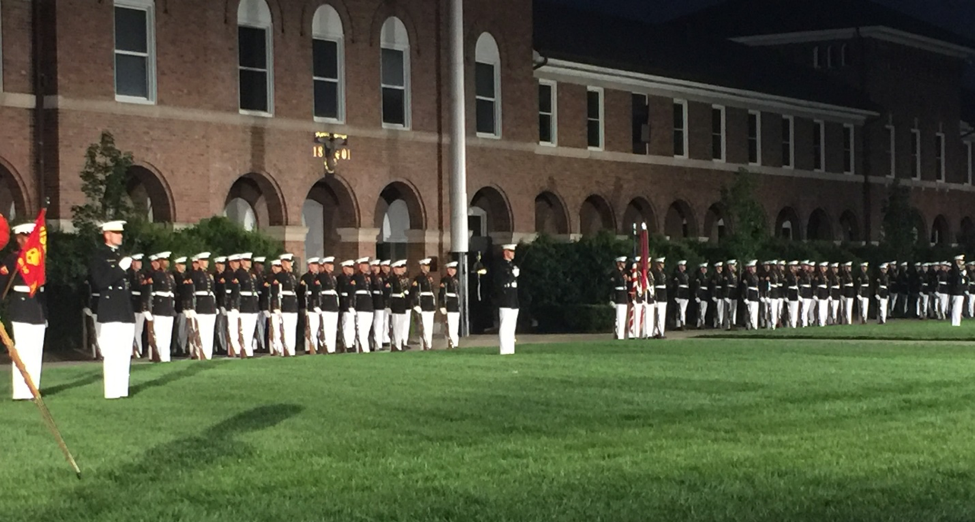 The Evening Parade ends with the U.S. flag being lowered as twilight descends on Washington. It is a flag with 15 stars and 15 stripes, which was the official flag of the United States when the base was built. 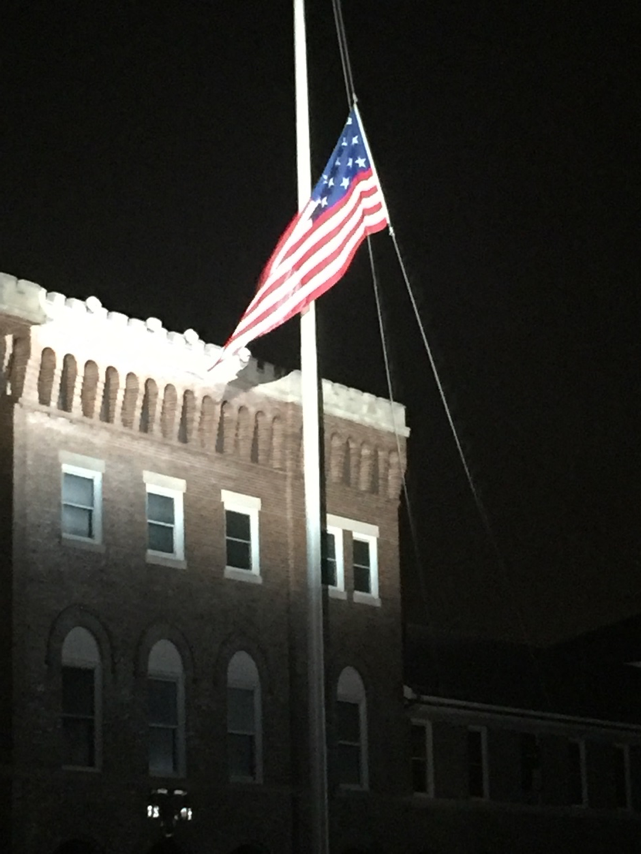 A couple of final observations. First of all, you haven’t experienced politeness until you have been to a Marine Corps ceremony like this one.

All of the Marines, despite no doubt suffering terribly from the hot, humid Washington, D.C. weather in their full dress uniforms, were all polite, respectful, and courteous to members of the public who were attending, especially the veterans coming in with their families.

Second, though they put on a great show, anyone who thinks that the Marines stationed at at this historic barracks are only ceremonial Marines, think again. Marines from the Barracks have fought in all of our wars, from the War of 1812 when they helped defend Washington to Operations Desert Shield and Desert Storm.

When we declared our independence from Great Britain and a tyrannical king and formed a new nation, it was the Continental Army and the new U.S. Navy—with its Marines—who helped secure and defend our new nation. I can’t think of a better way to celebrate our country’s birthday than by attending the Evening Parade at the Oldest Post of the Corps.

Don’t miss it the next time you bring your family to see the many museums, landmarks, and public buildings that make Washington the capital of the greatest republic in history.