Venerating and celebrating the Founding Fathers is an example of “structural racism,” apparently.

That’s the conclusion of a recently released document created by a National Archives and Records Administration task force on racism.

The National Archives and Records Administration is a federal agency charged with taking care of our country’s governmental and historical records, including the Declaration of Independence and the Constitution. 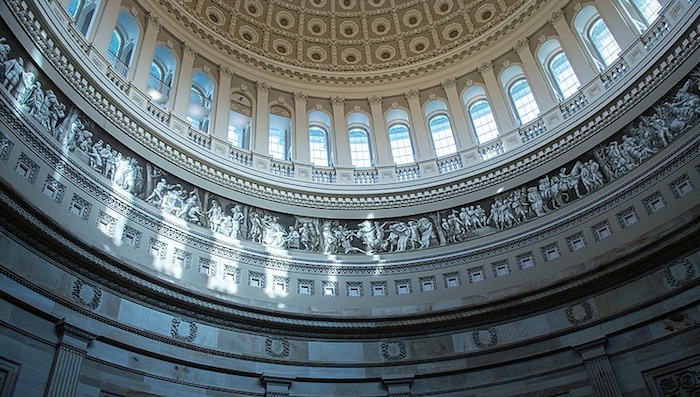 A National Archives task force on racism labeled the Capitol Rotunda an example of “systemic racism,” owing to its depictions of the Founding Fathers.

To no one’s surprise, it also cites The New York Times’ dubious 1619 Project and Ibram X. Kendi, the self-styled “anti-racist” whose ideas sound a lot like racism.

The Rotunda of the Capitol building itself is deeply problematic because, according to the task force, it “lauds wealthy white men in the nation’s founding while marginalizing BIPOC [black, Indigenous, and other people of color], women, and other communities.”

So, in the name of “diversity, equity, and inclusion,”—the “liberte, egalite, fraternite” of the modern age—the National Archives’ task force has recommended drastic changes to how our founding documents and the Founding Fathers are presented to the public.

The report suggested using “trigger warnings” to “forewarn audiences of content that may cause intense physiological and psychological symptoms.”

“Providing an advisory notice to users gives us an opportunity to mitigate harm and contextualize the records,” the report says. “It creates a space to share with the public our ultimate goals for reparative description, demonstrate our commitment to the process, and address any barriers that we may face in achieving these goals (i.e., the size and scope of the catalog and the ever-evolving knowledge we gain regarding what is harmful).”

The National Archives’ racism task force appears to be a bit behind the woke times, however.

What should visitors to the Rotunda see rather than our Founders? The task force recommends an interpretive “dance or performance art in the space that invites dialogue about the ways that the United States has mythologized the founding era.”

Lin-Manuel Miranda, creator of the popular Broadway play “Hamilton,” might seem like the natural creator of such a dance, but he’s problematic now, too. Miranda’s been canceled because his newest venture wasn’t quite diverse enough.

To really reinforce the obvious (namely, that the report is just critical race theory-drenched ivory tower gobbledygook), the report’s authors call for literal “safe spaces” in all National Archives facilities.

The absurdity of the report speaks for itself.

The war on history was always going to make its way to not only our Founders, but to the founding documents. Our elite institutions are hard at work purging every shred of connection between the America of today and what they see as our loathsome, racist past.

Is it even possible to simply acknowledge both the flaws and accomplishments of the heroes of our past without treating them as villains at this point? Apparently, they must be torn down and their achievements portrayed as no more than a conspiracy to oppress others.

It’s revealing of how deeply this ethos has permeated our elite institutions, given that even the National Archives—the repository of our most venerated founding documents—is now dedicated to creating some kind of vast hall of shame.

At times like this, it’s worth remembering that our national anthem—another thing the woke fanatics want to abolish—was not written after the triumphant defeat of our enemies.

No, it was written when Americans were pushed to the edge of defeat by a great world superpower. When defeat seemed imminent and the nation’s capital had been burned, the flag was still there. “The Star-Spangled Banner” is a song of defiance in a time of crisis.

Defiance toward absurdity is exactly what the American people need to undertake as we stare into this nihilistic woke abyss perpetuated by our new elite ruling class.

Ultimately, the Constitution and Declaration of Independence are not just dusty documents of ill repute and antiquated notions created by men who may now only be defined as racists.

No “hall of shame” can tarnish what those men and documents did, nor can they be purged from the hearts and minds of the tens of millions of Americans who still revere them.

I trust we will see just how true that is during this year’s celebration of Independence Day.