An idea that was met with enormous opposition at the polls in 2016 and in the General Assembly in 2017 is still being promoted as the solution to the challenge of climate change. This miracle is known as the carbon tax.

Proponents claim that the “fee” for using motor vehicles, heating homes and businesses, and imposing it on virtually anything that emits carbon will force consumers and industry to use less, ultimately lowering emissions. 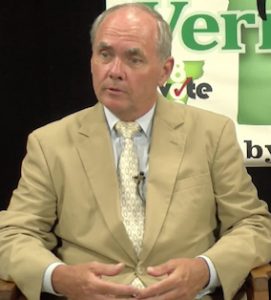 Make no mistake, what proponents of a carbon “fee” are talking about is a tax that will affect each and every Vermonter. It is in fact not a “fee” but is a new tax, plain and simple. Fees are generally defined as monies collected to fund the operation of specific programs. A tax is generally revenue collected to operate government.

Proponents of the carbon tax [in past years] have floated an incremental increase in the tax on fuels (gasoline, diesel, heating oil, etc.) of up to 89 cents. Put into perspective, today’s Vermont gas tax is 30 cents per gallon (32 cents for diesel). Add on the federal fuel excise tax of 18.4 cents (24.2 cents for diesel) and today’s gasoline tax is 48.4 cents per gallon. Given today’s average per gallon cost for gasoline of $2.58, you can get an idea of where a carbon tax will take us. And that is without any sudden escalation for the price of a barrel of crude.

The carbon tax is, like any sales tax, regressive by its very nature. Those who can least afford it will be forced to pay more in order to get to work. They will pay more to drive to the store. They will pay more to go to visit relatives. The cost to heat their homes will increase exponentially. The cost to use electricity for cooking and watching television will go up. The cost to use natural gas, propane, etc. for cooking and heating will go up. Obviously, anyone who lives in a rural area and has a commute to work will feel the pinch.

Another piece to the carbon tax [in years past would have been] to tax carbon-producing industries at the rate of up to $10 per ton of carbon emissions produced and incrementally increase it until it reaches $100 per ton. [The Essex Plan proposes a cost of $5 per ton annually, reaching $40 per ton after eight years.]

The bottom line is that the carbon tax is a pocketbook issue for all consumers. Businesses will not absorb the higher costs that they face due to the carbon tax. That tax increase will be passed directly back to consumers in the form of higher prices.

Vermont legislators are not the only ones who are considering this huge tax increase. There is a plan in the Northeast led by the Regional Greenhouse Gas Initiative to map out a strategy to impose a regional carbon tax. We’ll be keeping an eye on this.

Rather than support a higher taxing scheme, the Central Vermont Chamber of Commerce supports energy policies that encourage reliable and affordable electricity and fuels for heating and transportation. We want to ensure rates that are competitive and are cognizant of the cost to businesses of all sizes. We encourage energy conservation and use of renewables without shifting costs. We also support local control over siting renewable energy sources.

The Chamber supports efforts to reduce greenhouse gas emissions. We believe that the private sector leads the way in technology and innovation, offering the greatest potential to emission reductions and easing the harmful impacts of climate change.

Images courtesy of Flickr/401kcalculator.org and Vote for Vermont

12 thoughts on “Moore: Carbon tax will affect each and every Vermonter”