Analysts generally agree that the ESSEX Plan carbon tax will burden Vermonters who need to travel and heat their homes, but a new study from the Ethan Allen Institute finally reveals how much.

When environmentalists and lawmakers weighed a proposal this year to tax fossil fuels and use the money to lower electricity costs and give rebates to low-income and rural Vermonters, no one knew how the scheme would impact people at the household level.

But the “ESSEX Carbon Tax Profiles” study, released Tuesday, answers the question by examining data from more than 60 Vermont households to see how much each would pay in taxes versus how much — if anything — they would receive in rebates.

According to the plan, Vermont would impose an excise tax of 32 cents per gallon tax on gasoline, 40 cents on a gallon of heating oil and diesel, and 24 cents per gallon on propane and natural gas. Proponents say the tax is needed to reduce CO2 levels and minimize extreme weather patterns. 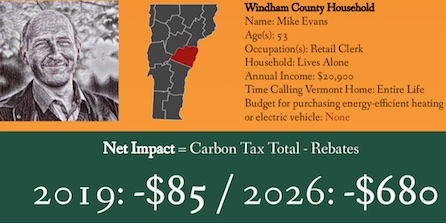 In all, six individual households are examined in the study, with household incomes ranging from $20,900 to $74,800. The household surveys spread across six counties: Orange, Franklin, Addison, Chittenden, Grand Isle and Windham.

This study demonstrates that even after the revenues are redistributed, the net impact will be a cost many Vermonters. In fact, the household that gets the hardest hit by the tax is the one with the lowest income: a Windham County resident will pay $680 for his share of the carbon tax, even though he collects a rebate of $572.

David Flemming, a policy analyst for EAI, told True North what gave him the idea to take this approach for the study.

“When I was in college I was reminded repeatedly the importance of taking things from a macro perspective and getting it down to the micro-level, which is households or individuals, so that you can put someone’s face on a policy,” he said.

He explained that Evans pays more despite his low income because he lives in an old farmhouse that is spacious and a challenge to heat.

“House-rich-cash-poor Vermonters is a phenomenon that isn’t too uncommon,” he said.

Flemming said as high as the estimated tax impact is for the six households, the real impact might be higher. For example, administrative costs were factored in conservatively, and the study assumes home heating for just five months of a year.

Rob Roper, president of EAI, said the cost of administrating the program alone will be a burden to taxpayers.

“They’ve got these rebates that have to be calculated on a monthly basis — it’s going to be very expensive,” he said. “It calls for two audits by the auditor over the course of a year which is gonna be extremely expensive, and there’s no estimate on that.”

He added that the program “will probably end up costing a lot more” than current estimates.

Roper noted while many politicians shy away from discussing the carbon tax, he reminded that politicians had a similar reluctance to talk about gun control until it came time to vote.

Rep. Valerie Stuart, D-Brattleboro, is a supporter of the tax. She said the high cost for Evans in the study is likely an exceptional situation that can be dealt with through further legislation.

“You can always find wrinkles in any piece of legislation or any study. Legislation is a process that evolves over time,” she said. “If we find that there are what you’d call ‘unintended consequences’ in legislation, we always can change them, and we do on a regular basis.”

She said the fight against climate change needs to take priority.

“What we are doing to our planet is catastrophic and we know that — at least those of us who are willing to take a hard look at the evidence know that,” she said. “I am wholeheartedly in favor of the carbon tax, and I think a lot of work has been done to mitigate the unintended consequences. But if some are discovered along the way, that can always be fixed.”

Other Democratic lawmakers support the plan as well. In a recent commentary, Rep. Mary Sullivan, D-Burlington, said “if we took these goals seriously we’d have solid plans in place on how to achieve the 50 percent reduction goal by 2028. But we don’t. This administration continues to express support for these goals without having any plans to achieve them.”

Rep. Mike Yantachka, D-Charlotte, actually criticized EAI in an op-ed for opposing the ESSEX plan. He said the plan is “a proposal developed by business owners, low-income advocates and legislators to strengthen the Vermont economy, prioritize the most vulnerable in the transition to clean energy, and reduce the pollution causing global warming.”

Democrat gubernatorial candidate Christine Hallquist did not respond to True North’s request for comment on the new study. However, in last week’s debate hosted by WDEV Radio, she admitted putting a price on carbon might harm low-income people.

“A price on carbon is one of the most effective policy initiatives for mitigating carbon. Does that mean I support it? I’m going to say not right away, that’s for sure, because I also, in my job we served 18 of the 25 poorest communities in Vermont, and we cannot make things any more difficult for people living on the economic margin,” Hallquist said.