A candidate for governor has asked the City of Montpelier for permission to paint an American flag and “Liberty and Justice for All” in huge red, white and blue letters next to the “Black Lives Matter” street mural in front of the Vermont State House.

“We would like to paint ‘Liberty and Justice for All’ for the Independence Day holiday in solidarity with Black Lives Matter,” Republican John Klar said in a special event request submitted June 29 to the City of Montpelier.

He wants to “reaffirm the founding principle in our Declaration of Independence that all men are created equal.” 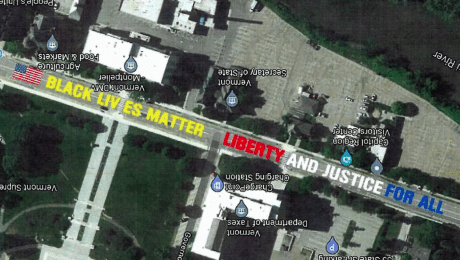 Proposed addition of “Liberty and Justice for All” to the existing “Black Lives Matter” street mural on State Street, Montpelier, in front of the Vermont State House. This photoshopped Google Earth photo was included in John Klar’s June 29 application to the Montpelier City Council.

In his request, Klar says his mural “seeks to unify Vermont’s shared goals of racial comity with a slogan that merely reaffirms founding principles that are now more essential to mutual harmony and respect than ever.”

The BLM mural request was approved unanimously at a Friday, June 12 special meeting of the City Council. Volunteers painted the lengthy street mural the next day. It is located directly in front of the Vermont State House.

“It’s a quick turnaround here, but with any organizing campaign, you’ve got to feed off the momentum,” City Councilor Conor Casey said. Casey also noted that Gov. Phil Scott had given explicit consent to the BLM mural.

Vermont Daily this morning emailed Mayor Ann Watson and councilors Casey and Dan Richardson, requesting comment and information about how the city will proceed with Klar’s application. As of 1 p.m. Tuesday, Casey was the sole respondent. He said it was the first he had heard of it. 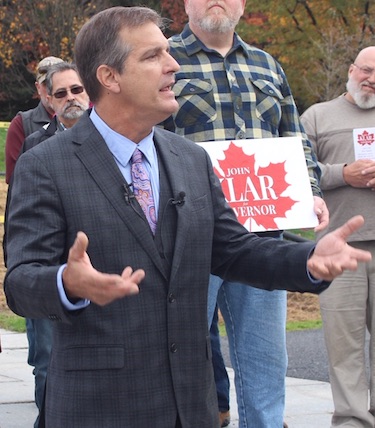 “For government to embrace the Black Lives Matter cause but reject an effort to celebrate the Fourth of July and seek to advance common goals towards racial equity would be an inappropriate and unequal application of power,” Klar said. “I submit that Vermont must reaffirm its basic Constitutional principles in this time of economic, social and health anxieties. The goal of the subject event and street painting is to lead Vermonters confidently into a post-Covid normalcy, by reaffirming those values which have helped Vermonters overcome greater challenges than we presently face.”

In the application to the city, Klar said he expects the street painting will need about 25 people and will run from 8 a.m. to 8 p.m. The Klar campaign also has reserved the State House lawn for an Independence Day celebration July 4.