California law enforcement and local officials gathered at the White House on Wednesday to make it clear that Sacramento doesn’t speak for them on illegal immigration.

The Democrat-controlled state Legislature passed and Gov. Jerry Brown, a Democrat, signed a “sanctuary state” law that prohibits state and local law enforcement from cooperating with federal immigration authorities on matters such as detaining illegal immigrants in local jails or reporting them. 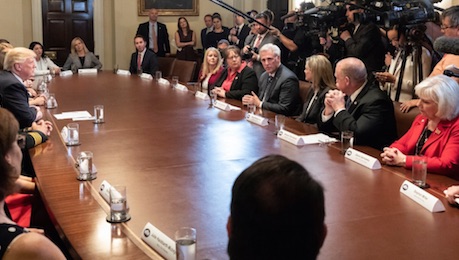 “This is your Republican resistance right here,” Melendez told the president during the Cabinet Room meeting, obliquely referencing the “resist” movement among some Democrats and liberals dedicated to opposing Trump’s policies.

Seven mayors, four sheriffs and one deputy sheriff, two county supervisors, a city council member, and a district attorney—all from California—attended the White House meeting with the president and administration officials from the Justice and Homeland Security departments. Each expressed support for the administration’s tough immigration policies.

Trump said that opposition to “sanctuary” policies is not limited to Republicans, as the public has increasingly become concerned about crime committed by illegal immigrants.

“We cannot let this butchery happen in America,” Trump said of violent crimes that illegal immigrant gangs commit in the United States.

The president also said that California has “sparked a rebellion” with its sanctuary laws.

Attorney General Jeff Sessions, also in the meeting, has withheld some Justice Department grants from sanctuary jurisdictions across the country, and has sued California over its sanctuary state policy.

Trump also criticized Mexico for not helping stem the flow of illegal immigrants over the Mexico-U.S. border.

Trump said his administration is stopping more illegal immigrants from entering the country, but isn’t satisfied with that.

“Thank you for your leadership, sir, and for bringing us all together,” Nielsen said.

Lassen County, California, District Attorney Stacey Montgomery said the illegal immigration problem has been exacerbated in part by the legalization of marijuana. A large number of illegal immigrants are marijuana growers, she said.

“So, legalization made it worse,” she said. “I’ve been appalled.”

“I’ve worked for six presidents, and I respect them all, but no president has done more than you,” Homan said, with respect to battling illegal immigration.