BURLINGTON — Three candidates for Burlington City Council Ward 3 met in a debate last week and discussed a range of important local issues, including the hotly contested issue of funding police.

Early on, Felker noted that Burlington has had little input from conservatives in recent years.

“In the last eight years that I have been here we’ve made this our home,” he said. “We have been happy to integrate and be part of this society, but I have had reservations about how there has been … no conservative representation or even voices represented during our electoral process. 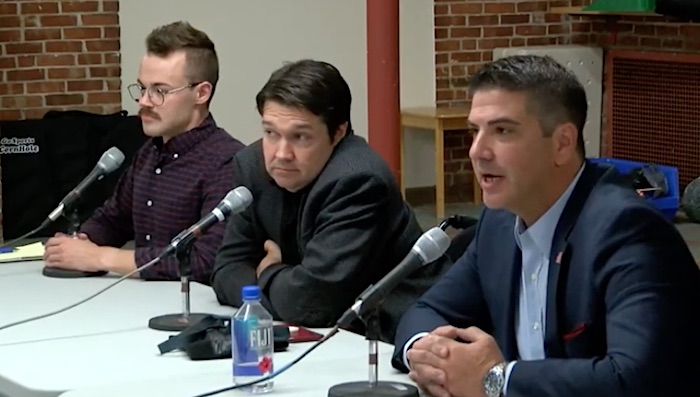 “Ward 3 seems to have been a progressive stronghold for the last 40 years, and that’s fine. I think my fellow Burlintonians that are progressives are very kind, considerate and good-hearted people. I just feel that it’s time that we start having conservative voices in this conversation.”

Magee said if he is elected he will represent various activist movements.

“We’re not going to achieve racial justice without economic justice, without environmental justice, or without social justice. … I’m proud to call myself a progressive — it’s what’s driven my work on each of Senator Sanders’ presidential campaigns,” he said.

Magee added that fighting against “white supremacy” in Burlington is going to be a challenge.

“I’m committed to challenge the white supremacy that’s inherent in our governing structure,” he said. “I think we need to do a lot more to bring BIPOC folks into the governing process and do more to deliver true public safety that transitions away from policing and delivers more mental health support. [I] also advocate for community control of police.”

Milne said he hoped to put politics aside and focus on the needs of people in the community.

“When I talk about this idea of servant leadership, it looks and sounds very different,” he said. “Instead of being somebody who’s coming to you with a political agenda, I’d be putting people first.”

Throughout the event, candidates took questions from members of the audience.

On the hot-button issue of police funding, Wendy Wilton addressed the candidates and said she’s concerned that cities with defunded police now have rising vandalism, theft and violent crime, and she asked where each candidate stood on the issue.

Felker alone said he would support more police and more funds to ensure the safety of Burlington residents.

Magee said it can be a “scare tactic” when advocates of police talk about violent crimes.

“When we talk about instances of violent crime I don’t want that to turn into a scare tactic or fearmongering,” he said.

Milne said he does not support defunding the police. However, he did say he supports a “transition away from the police department being a singular entity to actually establishing a Department of Public Health and Safety.”

City Councilor Perri Freeman, P-Central District, who identifies as transgender, was among those in the audience posing questions to the candidates. Freeman asked Felker about his stance on transgender rights, as Felker has stated on social media that a person’s gender is determined by natural biology at birth.

Felker responded, “I don’t deny your right to exist. You are standing here right in front of me, and you clearly do exist, Perri. We’ve had conversations many times and I’ve been completely respectful to you every time we’ve talked.

“I have stated on multiple occasions that I wholeheartedly and fully support equal rights for transgender people in our community. And I as such could and absolutely will be able to represent the transgender individuals in Ward 3.”

He added that “transgender individuals already have fantastic representation from Ms. Perry Freeman herself, who is a transgendered individual.”

“You know who doesn’t have representation on council? Conservative voices in Burlington,” Felker said.