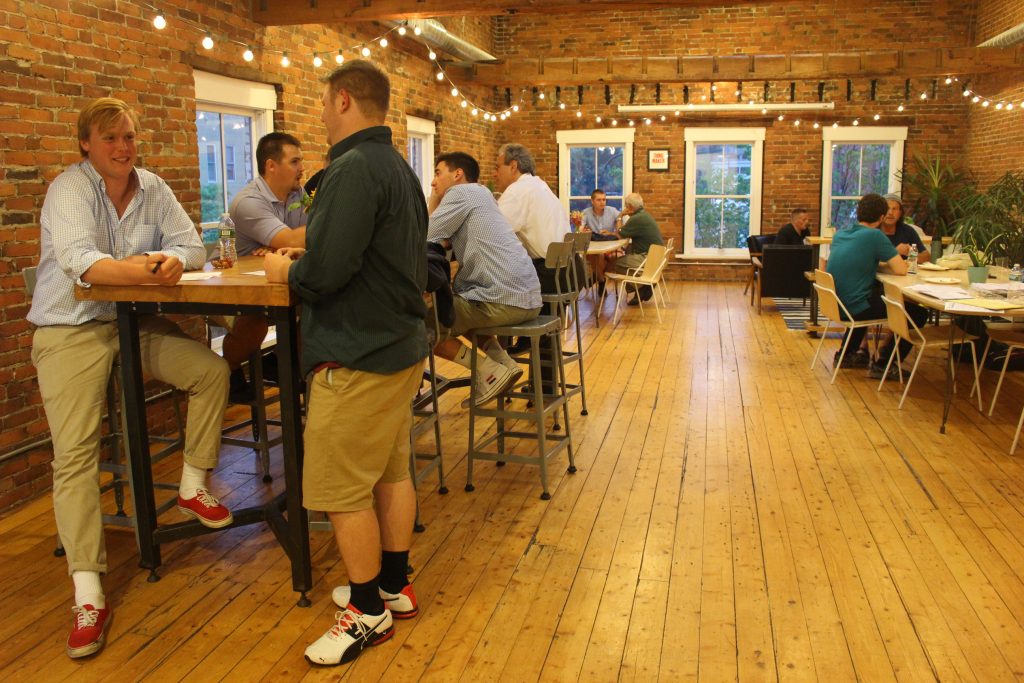 CIVILITY: With political hostility at alarming levels across the nation, the Burlington Thought Exchange seeks to get people to talk in a civil manner on divisive issues.

BURLINGTON — The second go-round of the Burlington Thought Exchange program took place this week on a rainy Monday evening, attracting about two dozen people who gathered to debate raising the minimum wage to $15 an hour.

The event, organized by the local nonprofit Vermont Future Now, could soon become a regular program that spreads across the state and beyond.

Under the direction of the group’s director, Asher Crispe, non-like-minded individuals sit face-to-face and chat for seven minutes before switching to another partner. After the brief political chat sessions are finished, participants grade each other on how well they listen and express themselves.

Crispe referred to the format as “political speed dating.”

“The idea was spawned by seeing this very alarming trend on the national stage towards a very polarized society where people who think differently politically can’t talk to one another, and that’s been very disconcerting,” he said. 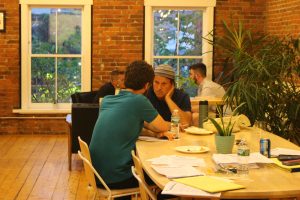 Face-to-face interactions in a casual setting tend to result in civil discourse, unlike the discussions raging across social media.

“On top of that, I saw not too long ago an article from Wired Magazine that they surveyed all 50 states and tried to rank them in terms of how vitriolic the political rhetoric was on news sites and blogs, and Vermont came in number one.”

Among the participants Monday night was Lawrence Zupan, a candidate for U.S. Senate who is running to challenge Sen. Bernie Sanders. He won the highest score for the evening on his ability to carry on a civil and engaging conversation.

“It’s real simple. When I talked, I talked with my full voice, and when I listened, I listened with my whole brain,” he said. “And that’s the way I plan on running my campaign to unseat Senator Sanders.”

Zupan elaborated on how this philosophy for communication translated into great conversations.

“When it’s your turn to listen, you listen with your whole mind. And when you speak, you put your whole heart into what you are saying,” he said. “And I think it’s even more important in politics than in other areas of life because you need to communicate principals across a broad spectrum of ideas to a wide continuum of people, and you don’t get a second chance very often with people to make a first impression.”

Ben Kinsley, former executive director of Campaign for Vermont, said he’s somewhere in the middle on raising the minimum wage, and that he heard some fresh ideas on the subject during the dyad talk sessions.

“I heard different ways of thinking about it,” he said. “I talked to a couple of people that worked in small businesses, and I’ve worked with a lot of those types of people. And it’s always fascinating to hear stories about what it actually means to a business when you talk about a minimum wage increase, and what it means to management for a small business.”

He said it was also interesting to hear from the worker’s perspective.

David Manitsky was there as someone who supports the wage increase.

“I found it insightful, interesting and eye-opening to know that you have more in common with these people than you normally think,” he said. “We were able to be civil and share ideas, and I think I’ve influenced some people, and I definitely get influence as well in terms of understanding their perspective.”

An example of an alternative perspective he heard, Manitsky said, was instead of increasing the minimum wage, perhaps lawmakers should be decreasing taxes and making other concessions regarding the cost of living.

“I think it’s an interesting idea. I hadn’t really thought of it that way,” he said.

Another participant was Andrew Cremins, who said he’s against the wage increase for philosophical and economic reasons.

“Even when you agree on stuff, you have different perspectives and you find new ways to approach things that can help you,” he said, adding that face-to-face interactions are a great improvement from typical social media arguments.

“When you have a chance to sit in a not-so-formal area and talk with somebody, I think it’s way more productive and thoughtful than the Facebook hysteria,” he said.

While he thought the discussions where engaging, Cremins said his opinion remains unchanged. In particular, he said a sudden and sizable wage increase would be unfair to many.

“Some people have been working for a company for a very long time and their wages have scaled upward progressively, as you might anticipate in a normal economic environment,” he said. Now when you see something like this I think it hurts that person pretty severely because all the other people who might have just started, they automatically start where that person took five years to rise to.”

The planners of the Burlington Thought Experiment say the next outing may be scheduled in other towns, including Bellows Falls and Manchester.