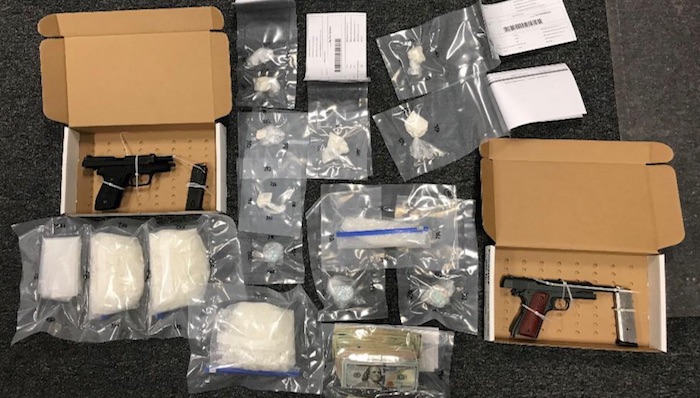 METH AND MORE: This photo from Burlington Police Department shows the drugs, firearms and money seized in one of the largest drug busts the city has seen in recent memory.

Over the past month, the Burlington Police Department has been busy with a handful of serious incidents including drug trafficking, car thefts and other alleged crimes.

The biggest development was a drug bust several months in the making. That investigation concluded last Friday with two arrests and the seizure of more than a kilogram of methamphetamine, several ounces of fentanyl and cocaine, two firearms, more than $10,000 in cash and other narcotics.

According to the Burlington Police Department, detectives working with members of BPD’s Emergency Response Unit carried out search warrants in Burlington’s Ledgewood Circle neighborhood, and on Farrell Street in South Burlington. They arrested two suspects — Quenton Dodson, 33, of Detroit and Michoni Campbell, 23, a native of Burlington.

According to a statement from police, “Mr. Dodson has a lengthy and violent criminal history in Michigan, to include shooting three men during a narcotics transaction in Ypsilanti, MI, in 2012.”

Acting Chief of Police Jon Murad commented on the scale of the operation.

“This is one of the largest seizures the BPD has seen in recent memory,” he said. “Countywide, we’ve seen police incidents involving methamphetamine trend upwards for some time now. We can and do promote non-criminal approaches to personal-use drug possession, and we can and should provide services and medically assisted treatment to people who suffer from substance-use disorder.”

Murad said consequences would be more strict for drug dealers.

“But for felony-weight narcotics dealers who feed those disorders, we can and must investigate and arrest. The drug detectives who have been working on this, and our terrific federal partners, did excellent work apprehending these alleged traffickers. Now we’re eager to parlay our casework into a strong prosecution.”

The police press release also had a graph indicating a sharp rise and meth-related crimes over the years. 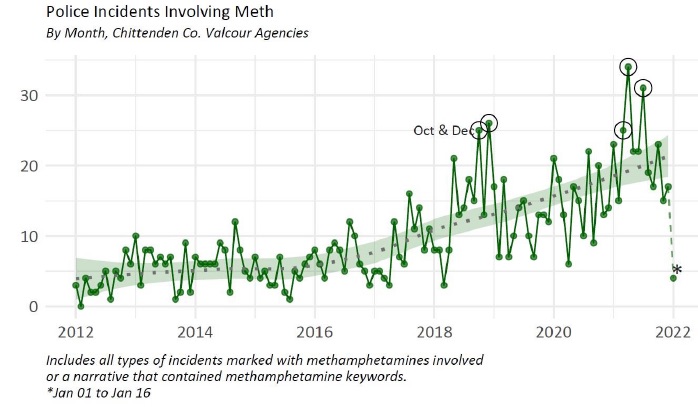 In June 2020, Burlington City Council voted to reduce police department personnel by more than 30 percent, capping officer staff at 74. In Oct. 2021 however, after the department had trouble providing essential round-the-clock policing, councilors reversed course and voted to allow up to 87 officers.

On Jan. 9, city police received a call from a woman who said her boyfriend pointed a gun at her and some friends. When the 911 dispatch center contacted police to respond, they noted that the caller had hung up and “now appeared to be in the presence of the boyfriend.”

According to the police report, when officers arrived at the scene they were able to make contact with the boyfriend and the others. The suspect was identified as Terrance Anderson, 54. The statement from police says Anderson had pointed the gun at the girl and threatened to shoot her and then himself.

In a separated incident also on Jan. 9, a vehicle was reported stolen at 9:55 p.m. at Shelburne Road, after someone accidentally left their keys in the car. Essex Police found the car on Jan. 12, but not the suspect, in the area of 27 Susie Wilson Rd. Surveillance footage obtained by police shows a female operating the vehicle on multiple occasions after it was reported stolen.