“Burlington teachers, we’re coming for your emails,” Actively Unwoke blogger Karlyn Borysenko told WVMT Morning Drive host Kurt Wright this morning. She said she and her team of volunteers will “dump a mountain of FOIA requests” on not only Burlington, but also Essex-Westford school district teachers and officials. The Freedom of Information Act, under both federal law and Vermont’s Public Records Act, requires disclosure upon request of all work-related emails and other communications records of public employees. 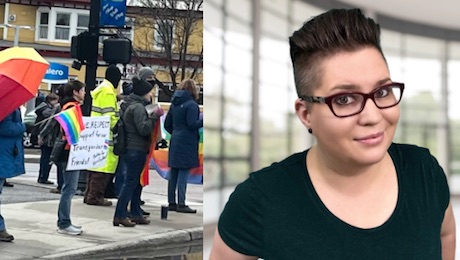 Burlington transgender activists and legislators, left, are pushing back with rallies and accusations against the national expose of the city school district’s aggressive gender ID education program by blogger Karlyn Borysenko, right.

Two weeks ago today, Borysenko published a post provocatively headlined “The most woke school district in America is grooming children live on the internet.” On Morning Drive today, she backed up both claims. As part of her painstaking research into public school gender identity education, she has studied the programs in such ‘woke’ cities as Seattle and Portland, among others. Hands-down Burlington leads the nation in aggressive ‘grooming’ of young children towards a non-traditional gender identity, she said.

Grooming is an explosive term that carries connotations of preparing a child for personal sexual exploitation. Supporters of the Burlington School District and critics of Borysenko and Ingraham are outraged at the suggestion that any educators are ‘grooming’ children for sexual use by themselves or others. Today, on Morning Drive, she explained her use of the word includes having educators press young children to change their views and behaviors about gender identity – something that Edmunds Middle School assistant principal was heard to do on the video.

Who is Karlyn Borysenko? She grew up in Williamstown, VT and graduated from Williamstown High School, where (she told Wright this morning) she was taught Martin Luther King’s ethic that racial equality means judging people by the content of their character and not by the color of their skin. She has an MBA and a PhD in psychology, specializing in industrial/organizational psychology. Now living and working in New Hampshire, Borysenko is a consulting organizational psychologist, writer and speaker.

She also experienced a dramatic conversion to the political message of President Donald Trump.

“Most people know me as a (now former) Democrat of 20 years who went to a Trump rally,” Borysenko says on her website. “The article I wrote about my experience went viral and garnered 3 million views in the first week. I was featured by Fox News, Glenn Beck, Dennis Prager, and on dozens of radio shows, podcasts, and YouTube videos.

“That’s when my life changed, and I knew I wanted to be a part of the conversation of bridging the divide to help people who are open to it take steps back towards one another.”

Also, Vermont supporters of gender ID education have criticized their opponents and organized rallies. For example, Burlington Progressive lawmakers Reps. Tiff Bluemle and Gabrielle Stebbins likened opposition to H679 to the murder of a transgender adult in Morristown last week.

“Over the last week, the VT GOP has centered anti-LGBTQ+ rhetoric in their fundraising efforts taking out ads in social media targeting specific legislators who have supported gender-affirming care for LGBTQ+ youth,” the two legislators wrote in a Front Porch Forum announcement of a rally Saturday. “Fern Feather’s murder, and these recent political attacks have contributed to widespread fear and anxiety within our trans and LGBTQ+ community.”

Their announcement drew a response from Tom Licata of Burlington, a supporter of traditional education and 2020 candidate for the House seat won by Bluemle and Stebbins.

“Folks just don’t want their children sexualized or politicized in schools or elsewhere. Parents – not government schools -are sovereign over their children’s lives,” Licata said in an email exchange with Bluemle.