The Buffalo Bills lost to the Pittsburgh Steelers 23-16 on Sunday. Buffalo taxpayers may soon experience another loss as sources recently revealed a plan by the Buffalo Bills to drop-kick taxpayers, asking for local residents to cough up $1.4 billion in taxpayer dollars to build it a new football stadium. 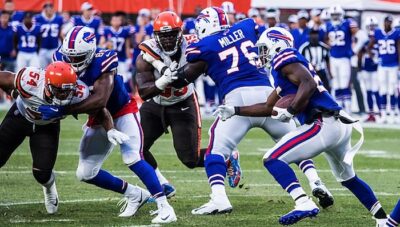 The Taxpayers Protection Alliance wrote extensively about the $750 million in subsidies handed out by officials in Clark County, Nevada, to the NFL’s Raiders for their $2 billion stadium. The Bills allegedly want nearly double that amount.

Keeping costs lower may be beneficial to taxpayers if Pegula Sports & Entertainment, the group that owns the team, gets its way. Pegula is seeking the greatest taxpayer subsidy ever given for a new stadium’s construction, if the reports are correct.

Buffalo News noted that the team hasn’t overtly threatened to leave Buffalo if it doesn’t get full funding for a new stadium, but certainly made clear that other cities lacking an NFL team would pay handsomely for the privilege of hosting one. The current lease between the Bills and Buffalo expires in 2023, so decisions are likely to be made quickly.

Mike Florio, a writer for Pro Football Talk on NBC Sports, pointed out the current state of stadium politics constantly sees franchise owners asking for free taxpayer money with the caveat that if they don’t get it they may move the team.

“That’s why the Raiders left Oakland,” Florio noted. “They couldn’t get much (or any) public money to stay where they were. They got a huge amount of it to move to Las Vegas. So they did.”

The Taxpayers Protection Alliance wrote extensively about the $750 million in subsidies handed out by officials in Clark County, Nevada, to the NFL’s Raiders for their $2 billion stadium. That made the Raiders the king of stadium subsidies, besting the $619 million given to the Indianapolis Colts and $600 million to the Atlanta Falcons. The Bills allegedly want nearly double that amount.

The Nevada Legislature passed a lodging tax increase that puts the onus on the payments to tourists, who pay an additional nightly room rate of about $1.50 on the Strip due to the tax increase.

Florio pointed out a second tactic for team owners is to move their franchise to a larger market if they can’t get a city to foot the bill for a new stadium. That way, the venue can host other events to pay back the cost of construction. He noted that’s why the Rams left St. Louis for Los Angeles.

“In Buffalo, it’s too early to suspect that the Bills may move,” Florio wrote. “However, the Pegulas may need to persuade state and local officials that they’re willing to move the team in order to get the kind of public money they want.”

While the Bills will likely accept a subsidy less than the full asking price of $1.4 billion, Florio points out “the fact that they want it all to be covered by taxpayer money suggests that the drop-dead amount is closer to 100 [percent] than zero.”

Neil deMause, one of the foremost experts on stadium subsidies and author of the book “Field of Schemes,” posted on the website of the same name that the Bills are taking the parent tactic when it comes to dealing with children: threaten punishment first, then figure out what to do later if the bluff is called.

“[Pegula senior vice president Ron Raccula] asserted that the current stadium’s upper deck ‘will fail’ in about five years but that it definitely won’t fail before then, which is an oddly specific way for metal to age, confirmed that the planned new stadium would have a $1.4 billion price tag, and said the team owners have ‘never discussed’ moving the team and ‘our sole focus is to get a deal done here,’ which is slightly odd for an interview where you just threatened to leave if you don’t get a deal done,” deMause wrote.

As if one stadium subsidy isn’t enough, Buffalo News reported that Pegula is also asking for upwards of $400 million in state and county taxpayer funds to upgrade KeyBank Center, the arena in downtown Buffalo that hosts its other local franchise, the NHL’s Buffalo Sabres.

Johnny Kampis is a senior fellow and investigative reporter for the Taxpayers Protection Alliance.