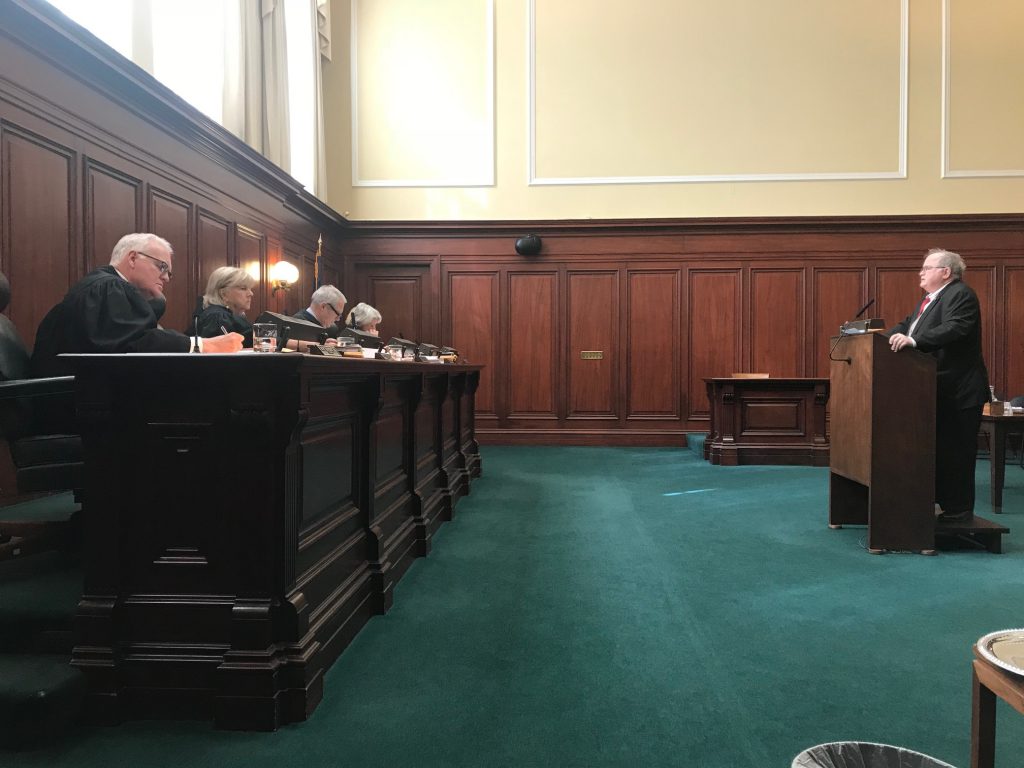 ACT 46 ON TRIAL: H. Brooke Paige appeared before the Vermont Supreme Court on Thursday to argue for the rights of local communities to control their schools.

MONTPELIER — The candidate who made national headlines for winning six primary election contests in August is waging an even bigger battle in Vermont’s highest court: the battle over Act 46.

Vermont’s K-12 education system is comprised of around 76,000 students and about $1.7 billion in state taxpayer money. The question of who controls these vast resources was in sharp focus Thursday morning at the Vermont Supreme Court.

Standing at the podium before the justices was conservative politician and activist H. Brooke Paige, the Washington resident who won six statewide primary races in August, and now is challenging Secretary of State Jim Condos in the general election.

But on Thursday, the issue that mattered is whether Act 46, Vermont’s highly contentious school district merger law, is constitutional.

“All of this other carry-on with the Vermont Republicans and winning the six primaries has been secondary of importance to me,” Paige told True North ahead of the hearing. “This could have the most profound impact on the educational future of our children.”

Paige said people in the towns of Washington and Orange were faced with giving up their governance and school building due to an Act 46-required merger.

“You have two school districts under the supervision of the AOE [Agency of Education] and [they’re] basically coerced, threatened and bribed into coming into an agreement. And subsequently, they are having to go to the voters, and the message that they convey is ‘we have no choice in the matter,'” he said.

On Thursday, Paige argued that the school governance law is unconstitutional.

“This wasn’t just irregularity in contracts. In fact, the whole mechanism of Act 46 did not comport with the statutes in Vermont as far as the open-meeting rules, as far as the composition of public bodies, and numerous other statutes,” Paige told the court.

“What I came to understand was the entirety of Act 46 violates the Vermont Constitution, Section 68, as amended in 1964. The whole concept of local control is embodied in the Constitution, and everything that was done in Act 46 flew in the face of that.”

At one point, Chief Justice Paul L. Reiber interrupted to ask if the state has precedent to regulate public schools.

“The Constitution, clearly it allows the General Assembly to make provisions for schools and does not require that it do so in each and every town under Chapter 2, Section 68, does it?” he asked.

Paige responded that most of Vermont’s towns and schools pre-existed the state, which indicates that management of the schools must ultimately lie within the community.

Paige said that in the lower courts the state had argued that the Brigham decision, which concerns equity in school financing, also implies that the state has control over school governance. Paige suggested the decision was poorly executed and that Brigham should not be interpreted as anything more than a reassertion of powers the state already had to direct state money for school budgets to ensure equity.

Philip Back, an attorney with the Vermont Attorney General’s Office, represented the state at the stand. He argued that Paige doesn’t have standing to bring the suit.

“The court need not consider the constitutional arguments of Mr. Paige that he presented orally and in his briefs because he has no standing to raise them in the first place,” he said. “As you know, for standing, there must be an injury that can be addressed by the court. But Mr. Paige did not allege that he has been injured by Act 46.”

Back nonetheless asserted the position that the state has the power to enforce Act 46 even without the Brigham decision.

“Even if the court were not to rely on Brigham or even overturn it, the trial court was still correct in that throughout the history of this court, the court has always stated that the state is the supreme sovereign and that the municipalities, districts and counties are creations of the state. And so it seems noncontroversial for over 200 years of case law that the legislature can dictate to individual towns or school districts how they are supposed to operate.”

After the hearing, Paige told True North that he is challenging the law because he’s concerned for the general welfare of the children who might be harmed by Act 46.

This is not likely the last lawsuit regarding Act 46. Former Hazen Union School Board Chair David Kelley told True North he and other lawyers, and possibly 21 districts or more, may be bringing their own legal challenge to the state along similar lines.

In September, an attorney representing the Alliance of Vermont School Boards Members sent a letter to the Vermont Agency of Education and the State Board of Education saying the group would sue over forced mergers.