I’m writing this in the middle of April, when 82,000 Vermonters, about 24% of the workforce, have lost their jobs thanks to Governor Scott’s coronavirus policy. Almost all of these are low- and middle-income workers. He’s whacked every small business in Vermont. Tens of thousands of independent contractors have seen their incomes vanish.

COVID-19 is serious. It’s a big challenge. Governor Scott is fighting it with carpet bombing, which hasn’t killed the virus but has devastated most everything else. Attila the Hun could not have done a better job killing an economy in his rampage through Europe.

Let’s look at data, not models. Vermont has 630,000 people. COVID-19 has, we’re told, killed 35 people. Almost all were in Chittenden County, most in nursing homes, and the average age of the dead is around 80.

The governor’s model projects that 19% of people with COVID-19 infections require hospital care. If it relies on this projection, it’s a bad model. 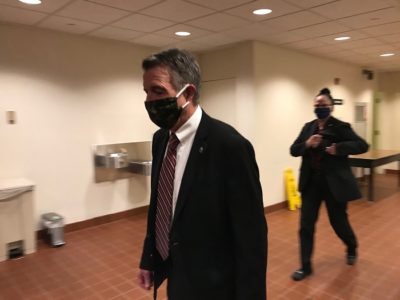 Gov. Phil Scott, who now regularly wears a mask, is preparing to require employees of newly-opening businesses to wear masks to protect against the coronavirus. The general public is merely being advised to do so for now.

Of 11,081 people currently tested in Vermont, three-tenths of 1 percent — 30 people — are now hospitalized. Almost all of those tested thought they’d been in close contact with a person infected with COVID-19 or were actually ill themselves. No one else can get a test.

Few who get infected have anything beyond a cold. Many have no symptoms. That’s not modeling. It’s reality, everywhere.

Almost all of those dead and hospitalized, if not all, already had serious health problems. In 2017, the nearest year for which I found online records, 6,031 people in Vermont died from all causes. In America, 250,000 people die each month, or 3,000,000 a year. Death is part of life.

Protection from bacteria and virus comes in many forms. Governor Scott has taken the most extreme approach anywhere in the country, except in New York City. Vermont isn’t Queens or Brooklyn.

It seems people in Vermont are being punished. Farmer’s markets can’t open. There’s a snitch hotline in place. You can’t buy seeds in stores. Aisles in big box stores are roped off. God forbid anyone might want to shop for a new TV set after buying food at Walmart. Speaking of God, churches are shut by edict for the first time in American history.

Governor Scott is considering forcing us to wear masks. The price of leaving our homes is visibly endorsing his poor governance. Power and TV time seem to have gone to a lot of political heads.

“Be creative,” Governor. Rather than kill the economy anywhere and everywhere it has a pulse, our leaders could have looked at the problem more rationally. COVID-19 is a disaster in New York City and northern New Jersey. That’s where half the country’s deaths are.

Nursing homes and elderly residential communities are very vulnerable. People with chronic illnesses need focused attention, too. Each needs a detailed, separate, targeted program. Instead, Vermont’s economy and people got the meat axe treatment. One size doesn’t fit all.

What’s the endgame? For our elderly and ill, COVID-19 will still be around when and if the Vermont economy staggers back from the dead. A vaccine is speculative. Forty years on, there’s no AIDS vaccine. There’s no vaccine for SARS, the bug closest to COVID-19. Vaccines don’t always work. Do we shut down again when 10, 20, or 30 people die? How can a business or anyone else plan anything if that’s the standard?

Hospitals are nearly empty. Bennington, Brattleboro and Rutland Hospitals are bleeding cash. They’re laying people off. What are the consequences for everyone’s health care if our hospitals are financially pummeled? We have a new 400-bed emergency hospital, built by our National Guard. That’s empty, too.

Wasn’t there a middle way other than killing the entire economy?

There’s no reason a small business with modest foot traffic needs to be closed. Low density businesses should be allowed to reopen immediately. Construction projects should resume, if builders want to bother given the mood of uncertainty the governor has created.

The governor should be pushing better hygiene, not mass unemployment. A “wash your hands” and “don’t touch your face” campaign would have seriously mitigated the spread of COVID-19. That’s what doctors say. It’s also common sense, which seems to have taken a holiday.

It’s good to listen to experts, but they don’t make public policy. They’re often right, but often wrong. The CDC, FDA, Dr. Fauci’s unit, and other health agencies gave us bad advice. A good leader has to be able to tell the difference between expert advice that’s good and practical and advice that’s zany and extreme.

“Be creative,” Governor Scott told parents and teachers when he closed the schools. One-tenth of 1 percent of those under 18 with COVID-19 infection require medical care beyond a diagnosis, some Kleenex, and a home quarantine. For thousands of children, school’s their safe place. Are all of Vermont’s parents really capable of homeschooling their kids or supervising online instruction? I suspect many aren’t, especially single parents, parents with special needs kids, or parents frantic about money because the governor threw them out of work.

What will the loss of three months of proper schooling mean? On statewide testing? Will we dumb everything down? How about the effect on college admissions? Closing schools for the rest of the school year, with next to no data, was irresponsible. They should reopen quickly. A regime of monitoring kids and drilling hygiene in their heads makes sense. “Be creative.”

Over spring break, why wasn’t each school district charged with developing a mitigation plan? I know Arlington would have come through with flying colors.

Our children are learning to hide from every risk that comes with living. They’re learning fear. Life’s full of danger. Humanity has always lived on the edge of a cliff.

Where is Governor Scott’s modeling on the impact of unemployment on alcohol, drug, spousal, and child abuse? What’s the tax revenue downside? Where’s the modeling on that? What programs will suffer? Programs for the disadvantaged is surely the answer.

Where’s the modeling for deferred medical care? Every doctor’s office is closed. How many early cancers and heart problems are going undetected? The state has all those statistics from the Great Recession. Why keep them from the public?

Half a dozen states haven’t drunk the Kool-aid. They’ve implemented a targeted, limited shutdown. Their death and infection rates are the same as Vermont’s or lower. They haven’t pointed a machine gun at their workers.

Many of the businesses still functioning, like Orvis in Sunderland, have cut their employees’ pay by 10% or more. Many will start layoffs soon. Orvis’s sales have plummeted.

Seventy thousand unemployed isn’t the end of the story. The federal relief programs will barely help. Unemployment benefits won’t pay all the bills. SBA money is difficult to get.

May I suggest all non-union state employees from the governor down take a pay cut pegged to the May unemployment rate, retroactive to March 15, when the shutdown was ordered. As Governor Scott said, everyone needs to sacrifice.

A pay cut for the governor, his commissioners, and every high-ranking, well paid bureaucrat will focus the mind. As if by magic, they’ll “be creative.”

Every politician, bureaucrat, and panic-peddling news outlet is already moving to the next war: the war to keep from looking like fools. We’re now in “cover your butt” and “finger pointing” mode. They will do and say anything to justify what they’ve done. They’re ginning up fear.

The CDC is telling states to goose the death numbers. Anyone who dies “with COVID-19” is a death “from COVID-19.” In New York, anyone dying from any respiratory illness is called a COVID-19 death, whether or not the dead’s been tested. Death certificates have to say “COVID-19 or the equivalent.” It’s doing it retroactively, too. Dr. Birx has said directly the dead are being “liberally counted.”

Vermont’s playing a gruesome numbers game, too. If a patient dies from respiratory failure or a flu-like ailment, the death is listed as “COVID-19 presumed,” no tests, no questions asked. That’s the new state directive.

Governor Scott is a nice guy. I voted for him twice. He needs to be more creative. Open Vermont now, Governor Scott. Or are you waiting to hit the 100,000 jobless jackpot? The buck stops with you.