It seems the Boy Scouts of America would prefer not to exist.

On Wednesday, the Boy Scouts announced that their signature program known simply as the “Boy Scouts” — which serves ages 10 to 17 — will no longer bear the word “boy.” Beginning in February, it will be known as Scouts BSA.

This change comes only months after the Boy Scouts announced girls would be allowed into the program. Chief Scout Executive Mike Surbaugh said they wanted to choose a name that “evokes the past but also conveys the inclusive nature of the program going forward.” 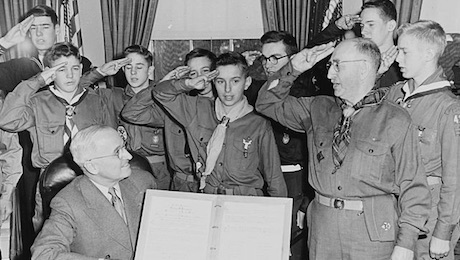 President Truman, sitting in the Oval Office, is updated on the achievements of the Boy Scouts, who are giving him the Boy Scout salute.

This name change, and the “inclusive” policy change that preceded it, indicates a fundamental shift away from the mindset that first gave rise to the Boy Scouts in the early 20th century. One can’t shake the impression that if the Boy Scouts were starting from scratch, they’d ditch even the acronym “BSA” and go completely gender-neutral.

It’s worth probing that fundamental shift in mindset.

The very existence of Boy Scouts, as separate from Girl Scouts, suggests a belief that boys and girls are fundamentally different, and that some good could be achieved by separating them for certain purposes. Otherwise, we would have simply had the “Scouts.”

The Boy Scouts emerged out of a culture that valued boyhood and girlhood as distinct realities, rooted in maleness and femaleness. Each gender had its own unique set of virtues that our culture sought to cultivate in the next generation.

Those virtues are captured in the Boy Scouts’ 1916 congressional charter, which read:

The purpose of this corporation shall be to promote, through organization and cooperation with other agencies, the ability of boys to do things for themselves and others, to train them in Scoutcraft, and to teach them patriotism, courage, self-reliance, and kindred virtues, using the methods which are now in common use by Boy Scouts.

Courage. Self-reliance. Virtues accessible to all, no doubt, yet which were considered integral to the masculine ideal.

The Girl Scouts came into being just two years after the Boy Scouts. Their motto was even more explicitly tailored to a single gender: to train girls “first as good women, then as good citizens, wives, and mothers.”

If the founders of these organizations believed men and women are essentially the same, and that the same ends could be achieved by mixing Boy Scouts and Girl Scouts together, then again, we would simply have inherited the “Scouts of America.”

So the legacy we have is two separate institutions premised on the idea that masculine and feminine identities actually matter—that they are unique, special, each worthy of celebration in their own right, and worth cultivating in the next generation.

Yet today, the Boy Scouts organization is perpetually at war with itself—at war with the very premise of its own existence.

The Boy Scouts rightly recognize that male and female are inherently equal. But equal doesn’t mean the same. The Boy Scouts seem to have conflated the two. If boys and girls are essentially the same, what’s to be gained from keeping them separate? That would be arbitrary and perhaps even wrong.

But if boys and girls are in fact different, and generally oriented toward their own unique masculine and feminine virtues, then it makes perfect sense to nurture them in separated settings — at least for discrete activities like scouting.

Yet the Boy Scouts have jettisoned that thinking in favor of radical inclusion. They may have achieved greater inclusivity, but at what cost? Their very definition is exclusive, just as so many other groups are exclusive (think of AARP, the NAACP, or the National Organization for Women). The Boy Scouts have sacrificed their identity to the left’s absolutist vision of inclusion.

That vision will be the death of any group that seeks to define itself by any unique trait.

Definitions are by necessity exclusionary, and any group that defines itself as A and not B will face pressure from the left to embrace B as well.

Except then, there’s no point to having a group at all. We’ll all just be absorbed into the left’s all-consuming impulse to “include” everyone. The left’s crusade for inclusion will redefine and un-define every group it touches.

Ironically, such radical inclusion is the death of any real diversity, because without real difference, there can be no diversity.

5 thoughts on “Boy Scouts nix the word ‘boy’ from name, showing they no longer believe in masculinity”