The Boston mayor is considering removing a statue that features Abraham Lincoln and a freed slave after a petition circulated the city.

Democratic Boston Mayor Marty Walsh’s office said in a statement that he’s “going to take time to assess the historic meaning of the statue” and possibly recommission it. A 7,000-signature petition has urged city officials to remove the sculpture that they deem to be misleading, according to WCVB 5. 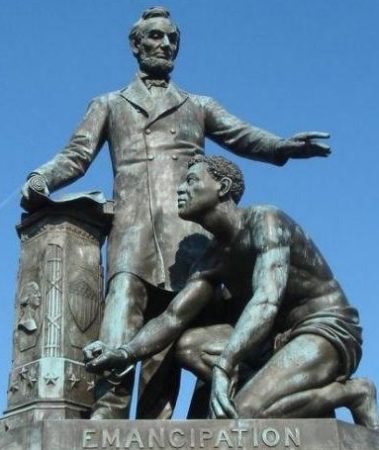 A statue of Abraham Lincoln standing by Archer Alexander, who is kneeling at Lincoln’s feet with broken shackles around his wrists.

The relic features Lincoln standing with his hand above an unshackled free black man with the inscription “a race set free.” To some, this is a tribute of Lincoln’s policies, but to others it’s derogatory.

“It says that it’s a statue that’s supposed to represent freedom. But, to me, it represents submissiveness,” Tory Bullock, the creator of the petition, told WCVB 5. “It represents: ‘Know your place, because that’s where you belong.’”

The statue in question has been vandalized several times over the past week, following nationwide demonstrations against the death of George Floyd, who died after a police officer knelt on his neck for over eight minutes, viral video shows. A Christopher Columbus statue was beheaded in Beantown last week as well, the local outlet reported.

The Lincoln monument was unveiled in 1876 and has been standing tall ever since. Frederick Douglass, a prolific civil rights activist of the time, hailed the creation of the statue when it was first placed in Boston.

Douglass described the statue at its unveiling ceremony in 1876 as “a monument of enduring granite and bronze, in every line, feature, and figure of which the men of this generation may read, and those of after-coming generations may read, something of the exalted character and great works of Abraham Lincoln, the first martyr President of the United States.”

Walsh has declared racism “a public health crisis” in the city of Boston following protests.

Today I am declaring racism a public health crisis in the @CityofBoston. The health impacts of historic and systemic racism are clear in our #COVID19 case numbers, and the impacts go far beyond the current crisis. pic.twitter.com/KO18NKMnjC