This article by Bob Audette originally appeared May 15 in the Brattleboro Reformer.

BRATTLEBORO — Three state troopers accused by a local activist of brutality are asking a federal court judge to dismiss a civil suit filed against them.

Shela Linton, a co-founder of Brattleboro’s Root Social Justice Center, in Brattleboro, filed a civil rights violation complaint against the Vermont State Police, contending that she was assaulted by a trooper during a protest in Montpelier on Jan. 8, 2015. 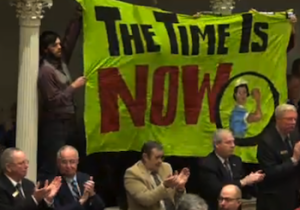 PROTEST: Throngs of single-payer anarchists flooded the Vermont House chamber in 2015 to interrupt the inauguration of Gov. Peter Shumlin to a third term as governor.

According to the complaint, filed with the U.S. District Court for the District of Vermont, Linton was one of 29 people arrested at the State House during the inauguration of then-Gov. Peter Shumlin. The protesters were demanding a public debate over the state’s failure to pass a single-payer health care plan.

“I believe I was targeted and intentionally assaulted by Detective Jacob Zorn because I am black,” wrote Linton in her complaint. “I was the only black person in the 29 people who were arrested. I was the only person to be assaulted. His actions also stood out from his fellow officers who in the similar situation chose not to use the force .. Zorn did.”

In addition to Zorn, Linton also named Paul White and Tom L’Esperance, both of whom retired from the VSP in 2015, in her suit. White was named in the suit as the supervising trooper on the scene; L’Esperance was VSP’s commander at the time.