Black people have been victimized by gun violence at a far greater rate than any other racial group amid a surge of shootings and murders in New York City, according to New York City Police Department data reviewed by the Daily Caller News Foundation.

There were 194 shooting incidents that involved black victims in the city in June, a 177% increase from the 70 recorded in June 2019, according to NYPD Incident Level Data. Of those incidents, 27 were classified as murders, a 170% year-over-year increase from the 10 black people murdered in shootings in June 2019.

No other racial group has been victimized by shootings in New York City at anywhere close to the same rate black people have been since violent crime began surging in the city in mid-May and further accelerated in the weeks after George Floyd’s police-custody death in Minneapolis, the data show.

The city council voted in late June amid the surge in gun violence to remove nearly $1 billion from the NYPD’s budget and transfer the funds to youth and community development programs. 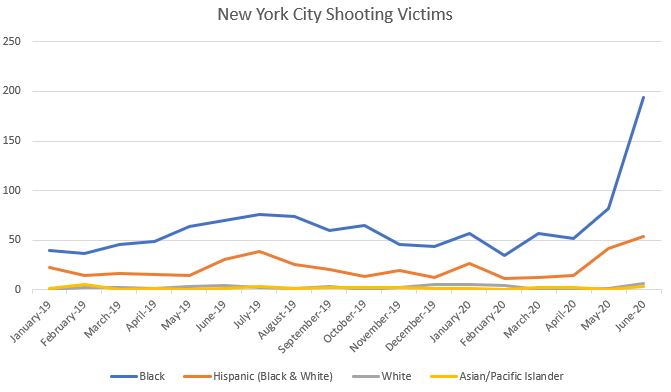 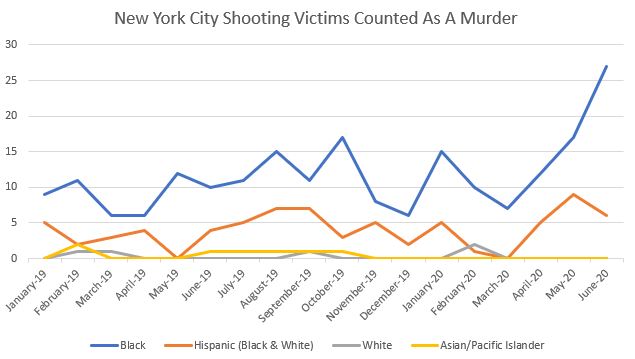 Victims of shootings in New York City who died as a result of the incident and counted as a murder. (Andrew Kerr/DCNF; Source: NYPD Incident Level Shooting Data)

No white people were killed as a result of shootings in New York City in June, according to NYPD data. The city recorded a negligible increase in white shooting victims that month, with six recorded victims, up from four in June 2019.

Violent crime continued to surge in New York City in July, with 244 citywide shooting incidents that month, a 177% increase from the 88 shooting incidents in July 2019, according to the NYPD. It’s unclear what the racial makeup of July’s shooting victims are, as that data is released on a quarterly basis.

NYPD Incident Level data show that the surge in gun crime began in New York City in mid-May, about two weeks before Floyd’s May 25 death while in police custody sparked nationwide protests and unrest. Gun crime further accelerated in the city beginning in mid-June, the data show. 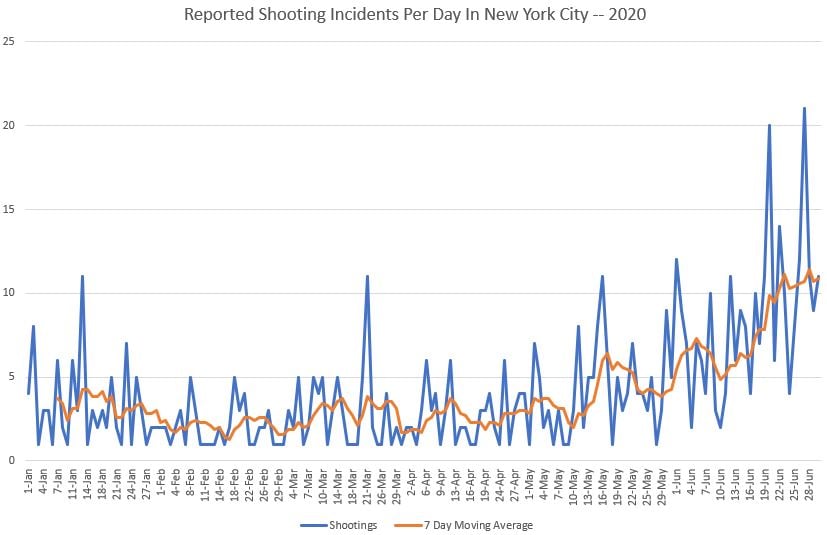 It’s unclear what exactly is driving the surge in gun violence in New York City.

New York City Mayor Bill de Blasio attributed the spike in violence in his city to the coronavirus during an interview with MSNBC’s “Morning Joe” in July.

“In New York City, we’ve been the safest big city in America for years,” de Blasio said. “We’ve had a very tough two months — no doubt — and it is directly related to the coronavirus — the dislocation it’s caused, the fact that our court system is not functioning yet, so many factors.”

A spokesman for New York’s court system said in July that it was “absurd, patently false and ridiculous” for de Blasio to blame courts on the rise in violent crime in his city.

“The Courts have operated continuously, operating throughout the pandemic, arraigning defendants, holding 100s of hearings, and conferencing 1,000s of cases, Office of Court Administration Spokesman Lucian Chalfen said, adding that de Blasio “should be looking in the mirror, not gazing out a window.”

NYPD Chief of Crime Control Strategies Michael LiPetri told the New York Post that a “perfect storm” of court closings, criminal-justice reform and coronavirus disruptions was responsible for the rise in violent crime in the city.

“With the closing of the courts, there has been no grand jury investigations either… I’m not talking about a simple gun arrest for the person who found in possession of a firearm,” LiPetri said. “More people getting released on their own recognizance and less people are getting indicted that’s a big issue.”

“There needs to be swift and certain justice as a deterrent for carrying an illegal gun in New York City,” LePetri added.

NYPD Commissioner Dermot Shea has also singled out legislation de Blasio signed into law in July that criminalizes the use of chokeholds by law enforcement officers. Shea said the measure could deter law enforcement, according to The Wall Street Journal.

Shea has also pointed to the release of prisoners from jail during the coronavirus outbreak as being a driver of violent crime, however, NYPD data shows that only 35 of the 4,500 inmates released from Rikers Island during the pandemic have been rearrested on weapons charges, The Journal reported.

De Blasio and the NYPD did not return requests for comment.

New York Democratic Rep. Alexandria Ocasio Cortez, who represents the Bronx, suggested in July that food scarcity was to blame for the surge in violent crime in her city.

“Maybe this has to do with the fact that people aren’t paying their rent and are scared to pay their rent,” Ocasio-Cortez said. “So they go out and they need to feed their child and they don’t have money so … they feel like they either need to shoplift some bread or go hungry.”

“If you can’t pay your rent, you cannot be evicted right now,” Cuomo said.