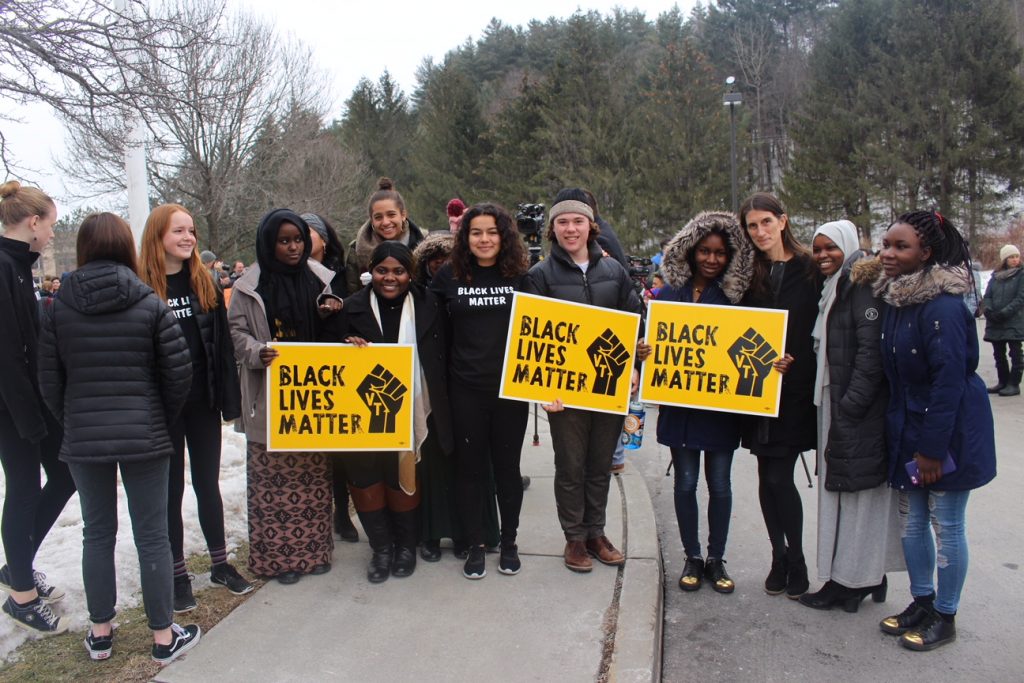 POLITICS AT SCHOOL: Students supporting Black Lives Matter stand outside Montpelier High School on Thursday morning to raise the BLM flag next to the American flag.

MONTPELIER — Hundreds of students, staff and reporters gathered outside Montpelier High on Thursday for the ceremonial raising of the Black Lives Matter flag on school grounds.

The only other time that a BLM flag has flown on a public campus was at the University of Vermont campus in Burlington.

“I have heard from so many people coming up to me and telling me that I’m really brave for doing this, but I also would like to recognize that it also takes a community that is ready to listen to us and to accept their faults and to take action to bring change,” she said.

“Black students as a whole are pretty much robbed of a thorough education. We don’t go to school learning about ourselves, rather we are fed a white-washed curriculum that is not fully representative of American history.”

She added that the community must work collectively to “dismantle the systemic racism embedded in our schools.” 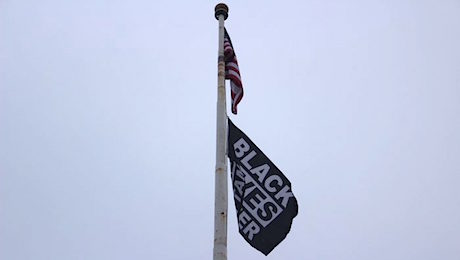 Outside Montpelier High School, the flag of a controversial political movement waves next to Old Glory.

The controversial politicization of high school students has been widely criticized, though supported by school administrators.

“This has been part of almost a year-long effort around equity in Montpelier public schools, so for us this is not a singular event, this is a continuation of our commitment to ensuring that all students feel safe and included when they come to our buildings,” Montpelier Schools superintendent Brian Ricca told True North Reports.

He also acknowledged that many disapprove of the school taking sides on hot political disputes and movements.

“While I recognize that the flag is divisive, we are honoring the experience of our students and that’s critical to me as superintendent,” Ricca said.

“My commitment is that every student that comes to Montpelier public schools feels safe and included; we are not meeting that commitment at this point. And this, to me, is a portion, not the beginning and not the end, but a portion of a conversation around equity that needs to happen.

The flag-raising has been accompanied by unsubstantiated, unverified claims that “white supremacists” were protesting the event. Ricca said he received “no specific threats,” and added that he welcomed dissent.

“There were individuals who told us they were going to come and protest, and of course folks are welcome to do that,” he said. “We’ve been working with law enforcement from the beginning, and I’m proud to say that I live in a state where law enforcement is partnering with us.”

Montpelier High School Principal Mike McRaith spoke at the event and appeared to apologize for his race, sex, gender and religious status.

“When you think of the types of privilege one can have, I check just about every box,” he said. “I’m white, I’m male, Christian, able-bodied, fixed-gendered, I’m in a position of power, and those are just some of the privileges that I benefit from.

“With your help, I’m willing to better understand my own privilege and the important role I play in ensuring the safety, opportunities, and justice for those who may not share in many or all of those privileges.”

He also spoke directly to the police, as numerous officers were at the event.

Some supporters of BLM have been seen calling for violence against police officers. At least some of the BLM founders’ literature praises those who have committed violent crimes and murder, as noted by National Review senior writer David French.