At a public forum hosted by the Bennington County Republican Party last month, a bipartisan panel agreed that tax reform and the economy were the right focus for Vermont going into 2018.

The discussion, which was held at Burr and Burton Academy and recorded for later multiple broadcasts by GNAT-TV of Sunderland, Vt., focused largely on Bennington County concerns. Topics ranged from growing the local service economy and creating more high-tech jobs to Vermont’s troublesome property tax burden and attracting new businesses. The panel was moderated by host Andrew McKeever of GNAT-TV.

Browning began the discussion by responding to a question about Vermont’s tax code.

“The state tax code needs reform desperately,” Browning said. “It needs reform so that we can have low and stable tax rates which are the best for businesses — and we can have tax rates that raise sufficient revenue to cover the costs of the functions of state government.

“The problem with our tax code is that many, many special provisions have crept into it … to give credit and deductions, exemptions to particular groups of taxpayers. You end up losing a lot of revenue and not always tracking the costs.”

Browning told the audience that she has introduced a new bill, H.538, in the Statehouse year as a means to reduce property taxes “through reform of both the Education Fund and the income tax system.”

Regarding tax reform,  Keefe agreed with Browning that the state tax code must remain stable. He cited tax reform changes in Washington and how they might affect Vermonters.

“(Federal) tax rates might come down, the standard deduction might be doubled, and the child-care credit might be increased. This are good things for a lot of working Vermonters. … How that affects our state revenues is something I have to look at,” he said.

He added: “Property taxes are a mess. I was astounded how few legislators could explain it to their constituents.”

For her part, Sullivan agreed with Browning and Keefe, but pointed out that the state economy has gradually changed over time but revenues have not kept pace. 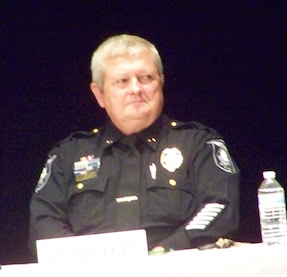 TOO COMFORTABLE: Manchester Police Chief Michael Hall said politicians “have made it too comfortable for these folks to want to go out and get a job.”

Chief Michael Hall, a native Vermonter and former Manchester School Board member, had something to add to the tax reform discussion from his perspective being on the streets of the community every day.

“I’m not a politician, but I think the whole state is too reliant on property tax. If you don’t own property in Vermont, and you’re a renter, you get a renter rebate; I don’t see how that makes sense,” he said.

“I do know that when I see people who worked and struggled their entire lives and who have to put up their house up for sale becaue they can’t afford the upkeep and property tax, it signals to me that something’s terribly wrong. … You can’t keep going back to the property owner for the revenue.”

On the topic of diversifying Vermont’s largely service economy, Keefe said developing the trades is a plus. He likes Gov. Phil Scott’s support of vocational-technical education in the state.

“There’s no silver bullet. … We can’t compete with big spending states like New York to attract business. We have to go where our strengths are and seize opportunities,” Keefe said.

“I totally agree. We need to increase opportunities for young and old,” she said. “We need industry that is focused on clean manufacturing, we need to bring in new businesses — just cutting taxes won’t do it.

“We need to develop growth, rebrand, look at aeronautics, manufacturing, leverage our proximity to Boston and New York. We also have to stop thinking only about the Burlington area for jobs. We have to grow other places in Vermont like Bennington County.”

Hall raised a red flag about some Vermonters’ willingness to work. He commented that business leaders he talks to report that it’s a struggle to find people who have a work ethic, and he laid the blame at the ease of government handouts.

“It’s about getting people to work,” Hall said. “It’s not that the business people can’t hire people because they’re not around. It’s because so many (able-bodied) people are on state subsidies and social welfare, and they are bleeding our system dry.”

Hall said he sees proof of it everyday as he’s out doing his job.

“I challenge you: Drive around Rutland or Bennington at 10 a.m. or 4 p.m. … and look at all the able-bodied young men and women just loafing around town.

“You (politicians) have made it too comfortable for these folks to want to go out and get a job. A lot of people don’t want to hear this, but it’s the truth. … And when was the last time you heard of anyone in Vermont being charged for welfare fraud? Think about that.”

Browning added that many Vermont job applicants have trouble passing employer drug tests. She also pointed out that rural areas of Vermont have been getting short shrift for two decades when it comes to employment.

“Our economic strategies haven’t succeeded. We need to have a rural and small-town development strategy. Slow-growing areas need infrastructure improvements: Transportation, telecommunications and more,” she said.

Regarding youth flight out of state, all the panelists agreed to focus on state strengths and find new ways to entice young Vermonters to both learn and earn here.

“I believe our future is what we will make of it,” Sullivan said. “Branding and targeting clean manufacturing and new technology is going to be important, but we have to get the buzz out there that Vermont is business-friendly. We need to convince business people that Vermont is a friendly place to stay.”