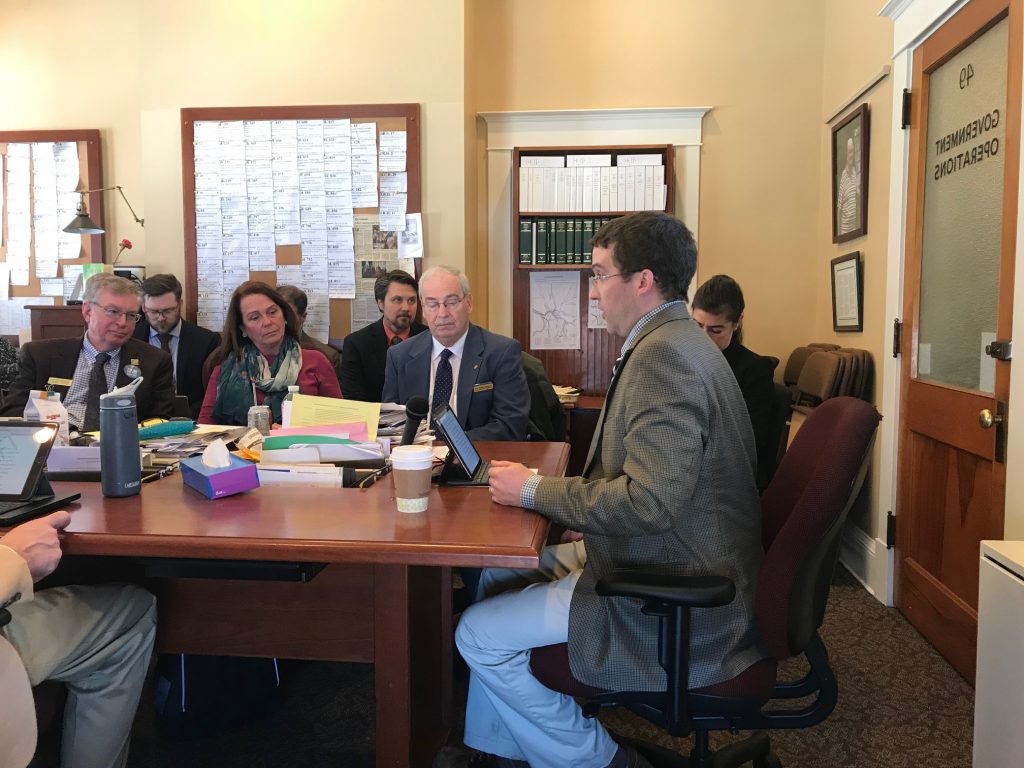 HANDS OFF THE CHECKLIST: Will Senning, director of elections at the Secretary of State’s office, told the House Government Operations Committee that he supports a bill that prohibits sharing of voter checklist information with the federal government.

MONTPELIER, Vt. — The House Government Operations Committee on Tuesday approved a bill that imposes severe penalties for sharing Vermont’s voter checklist information with the federal government or a foreign government for purposes of cross-verification with other states or for voter registration.

The bill, H.624 (draft 4.1), also prohibits sharing voter list information for purpose of public disclosure with the federal government or a foreign government. Office of Legislative Council attorney BetsyAnn Wrask broke down the details before the vote.

“A public agency cannot knowingly disclose checklist info or a municipality’s portion of the statewide checklist or the municipality’s portion to any foreign government or to a federal agency or commission or person acting on behalf of a foreign government or federal entity for those same three purposes: registration, publicly disclosing or comparing,” she said.

In addition, any person wishing to obtain a copy of the statewide voter checklist must swear and affirm under penalties of perjury that he or she will not knowingly give out voter information to the federal or a foreign government for those three reasons.

An earlier version of the bill would have had individuals getting local voter information from a town clerk fill out an affirmation declaring under penalties of perjury that they won’t violate this policy. This was removed from the version of the bill approved Tuesday, but it still applies to an individual seeking the statewide list.

Rep. Jim Harrison, R-Chittenden, noted some ironies about the proposal.

“[It’s looking for] a problem that I’m not sure really exists as we’ve had one request in history — and I don’t believe we fulfilled that request — for the voter checklist for the commission that was looking at voter issues,” he said, referencing President Donald Trump’s disbanded bipartisan Advisory Commission on Election Integrity.

“For the life of me I can’t figure out going forward why we would put that in statute when we allow anyone of us, any one of our brothers and sisters in the other 49 states, and for that matter anyone else in the whole world, except our own government, to have access to the voter checklist.”

Harrison was joined by Rep. Dennis Devereux, R-Mount Holly, and Rep. Patti Lewis, R-Berlin, as the three no-votes in the committee.

Lewis inquired about the questionable logistics of how a town clerk is going to legally ask someone requesting a public record who they are and what they are going to use it for.

“I just don’t see how this is logically going to work. What are we trying to protect? It’s a public record, and how do you exclude one particular entity? Everybody has a right to that checklist, right?” she asked.

Senning said it’s appropriate for the Legislature to put limits on access to public records, noting that restrictions on access for commercial purposes have been on the books for some time.

Senning said he supports H.624 prohibiting the federal government from requesting the checklist, although he recommended the change that individuals seeking voter information at the town level not be required to fill out an affirmation under penalty of perjury concerning the sharing of information.

At one point in the discussion, lawmakers debated an amendment that would have placed additional restrictions on individuals seeking to obtain the checklist for cross-verification purposes. Devereux, seeking clarification of the amendment’s intent, asked Wrask if any person who wanted to inquire about someone’s right to vote could do so.

“If somebody registers in my town and I think that they are registered in the wrong state, I can’t ask for a copy of that checklist to go on my own and verify if that person is still registered in another state?” he asked.

Wrask answered that a person could not use information for such purposes: “If you want to get a copy of the statewide voter checklist in order to compare it to another state’s, for example, this appears to prohibit getting a copy of the checklist.”

While the amendment failed, the version of H.624 approved by the House on Feb. 15, two days after the committee meeting, includes a prohibition on any individual disclosing state checklist information to the feds for purposes of “comparing a voter’s information maintained in the checklist to personally identifying information contained in other federal or state databases.”

The bill advances amid concerns by some residents that Vermont’s checklist is riddled with inaccurate and out-of-date voter information. In one incident in 2016, Vermont resident Bob DePino tried to send 2,000 fliers for his wife’s campaign for state representative using statewide checklist information, but had 500 fliers returned as not deliverable.

“Shocked by the result, the DePinos soon came to the realization that information on roughly one-quarter of voters was either wrong or out of date,” Emma Lamberton reported for Vermont Watchdog.

CORRECTION: The original photo caption inaccurately stated that Elections Director Will Senning said he supports a bill that prohibits “sharing of voter checklist information with any person or entity looking to scrutinize the list for accuracy.” To clarify, Senning supports a bill that prohibits sharing of voter checklist information with the federal government. The version of H.624 approved by the committee, and later approved by the full House on Feb. 15, prohibits individuals from sharing checklist information with feds for purposes of comparing info with federal or other state databases. The measure does not prevent individuals from attempting to make their own comparisons for verifying checklist accuracy. The title also was updated with the words “by feds” to clarify the scope of the proposed measure. Finally, the exchange between Rep. Dennis Devereux and Legislative Council BetsyAnn Wrask pertained to a proposed amendment to H.624 that failed to pass.