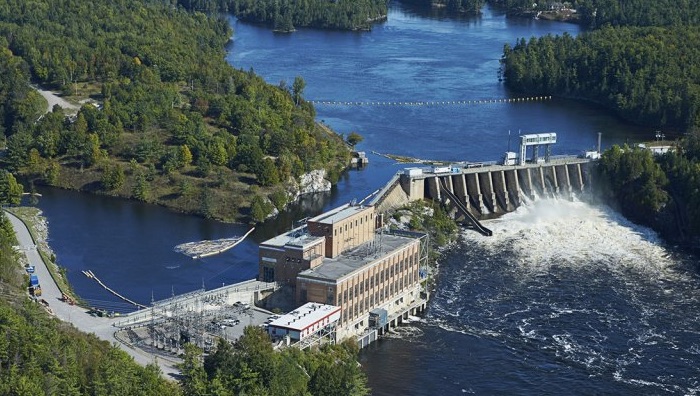 One of Hydro-Quebec’s many electricity-generating plants

Beginning next January, carbon-free power produced by dams 200 megawatts or larger will become 10% less “renewable” every year for state energy standard purposes, according to a bill introduced Tuesday in the Vermont House of Representatives.

H557 is an effort to make Big Hydro — mostly from New York and Canada — less available as an option to meet the Renewable Energy Standard (RES) mandate the Legislature gave utilities in 2017.

Under the RES, Vermont’s utilities must procure a defined percentage of their total retail electric sales from renewable energy. The requirement started at 55% in 2017, increasing 4% annually until reaching 75% in 2032.

Hydro-electric power is indisputably renewable energy, as defined by state law: “energy produced using a technology that relies on a resource that is being consumed at a harvest rate at or below its natural regeneration rate.” Snow melts, rain falls, rivers flow, turbines spin.

Contracts with Hydro-Quebec [HQ] and upstate New York generators provide about 20% of the state’s electricity. The state’s 84 tiny power dams, by contrast, together have a generating capacity of less than 200 megawatts. They aren’t threatened by H557.

“If we’re going to ‘plug in more and burn less’ we’ll need more renewable energy,” Masland wrote. “If we’re honest with ourselves we should recognize that HQ power comes from methane producing dam construction and flooding that destroys the Quebec landscape and displaces the indigenous population that has lived there for millennia. If we think that HQ won’t expand further we’re fooling ourselves.”

Masland is at least partially correct: the construction of a hydro power dam is extremely carbon-intensive. Trees rotting in reservoirs do emit methane.

However, wind turbines and solar panels also are carbon-intensive in their manufacture and installation. Nevertheless, wind, hydro and solar power are all considered “carbon-free” because of their low carbon output during the entire ‘life cycle’ of construction, operation, and decommissioning.

Canadian hydro power is considered a godsend by many southern New England utilities and states. Demand for power is growing. Fossil fuel and nuclear plants are closing. Every year the renewable energy standard demand grows. Solar and wind power have not fulfilled their promise of producing the lion’s share of the region’s electricity.

Yet just north of the border, huge amounts of carbon-free, renewable power are for sale. Transmission capacity is a problem. Several more power lines running through Northern New England have been proposed, only to be shot down by alliances of concerned neighbors and supporters of Atlantic ocean off-shore wind projects.