The objective of the Communist Revolution was and is to “seize the means of production” from private industry and place it under the control of a centralized government.

We all know Bernie’s desire for a Medicare for All program, seizing the means of the health care industry (roughly 18% of GDP) and placing it firmly under the federal government’s thumb. 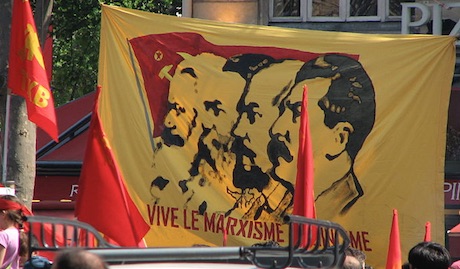 Bernie’s America would put the government in control of your mind, your body, your housing, your mobility, and your “democracy.” Does this sound more like the U.S. Constitution, or the Communist Manifesto?

But Bernie also proposed back in August that, in order to make meaningful strides towards a Green New Deal and its greenhouse gas reduction goals, that he would have to seize control of US energy production (just under 6% of GDP).

In September, Sanders proposed a $2.5 trillion housing plan that included a proposal to impose national rent control, “capping annual rent increases throughout the country” for all intents and purposes seizing control of the United States’ rental real-estate market.

And just this week, Sanders said he wants to make mandatory the public (in other words “government”) financing of elections, therefore seizing control of U.S. political campaigns. “The Vermont senator said Monday that as president he’d enact mandatory public financing laws for all federal elections and ban corporate donations for inaugural events.”

The government has already seized control of K-12 education, so no effort needed on Bernie’s part there, but his “free” college tuition would put government firmly in control of higher education as well.

So, in conclusion, Bernie’s America would put the government in control of your mind (school), your body (health), your housing (rent control), your mobility (energy), and your “democracy” (elections). Does this sound more like the U.S. Constitution, or the Communist Manifesto? That’s a rhetorical question, of course. We all know the answer.