By Julia Cohen and Robert Donachie

Former presidential candidate Bernie Sanders said he missed former Minnesota Democratic Sen. Al Franken, who resigned after photos of him taking advantage of sleeping women were released to the public, after being asked about the #MeToo movement. 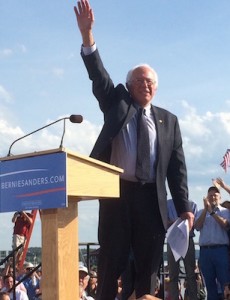 “Al is a friend of mine and we miss him very, very much,” Sanders said in an interview with The Washington Post on Wednesday in response to being asked if the Democrats made a mistake ousting the disgraced former senator.

Sanders also avoided talking about former president Bill Clinton, saying he did not want to look back on the past after the interviewer asked him if he regrets his vote not to impeach Clinton after the Monica Lewinsky scandal. Sanders shifted to talking about the importance of holding elected officials accountable for inappropriate conduct.

“… if a member of Congress harasses or worse an employee, that member will be held accountable … there will be legislation passed,” Sanders said. “What the issue is about is, we have got to be aggressive in making certain that women … feel safe and comfortable on the job.”

Sanders has been an avid supporter of the #MeToo movement.

Critical of ‘superdelegate’ system that made Clinton in 2016

Sanders also spoke against the Democratic party’s superdelegate system Wednesday morning — a system that contributed to his failure to secure the Democratic nomination for president against former Secretary of State Hillary Clinton in 2016.

“Right now, as you know, and when I ran, you had many, many superdelegates. Almost all of them ended up supporting Hillary Clinton,” Sanders told The Washington Post at a conference Wednesday.

“And, I think there is a widespread understanding that just is not right. In fact, you had superdelegates voting for Clinton in states that I won pretty handsomely,” Sanders said.

What the independent senator is saying is valid. For instance, Sanders absolutely dominated against Clinton in New Hampshire in 2016, but she ultimately gained as many delegates in the state because many of the superdelegates supported her.

“I think there is a general feeling that does not make a lot of sense,” Sanders said of the superdelegate system. “Now, there is agreement among Tom Perez and a lot of the Clinton people, as well as our people, who came together and formed what Clinton and I call the Democratic Unity Reform committee.”

The committee holds the position that the party should substantially reduce the number of superdelegates “by about 70 percent,” Sanders said.

Sanders also talked about voter suppression, which he found to be a big issue in 2016.

“You got Republican governors and attorneys general all over this country trying to make it harder for poor people and people of color to vote,” Sanders said. “Go to New York state and find out that if you are going to participate in the Democratic primary, you have to got to be registered as a Democrat six months before that primary. When I ran in 2016, 3 million people in New York state were ineligible to vote.”