Vermont Sen. Bernie Sanders won the New Hampshire Democratic primary Tuesday night as yet another challenger dropped out of the race.

As Sanders addressed the crowd of his supporters, he said the results were “The beginning of the end of Donald Trump,” calling Trump “the most dangerous president” in the history of the country.

Not long after the polls closed, California businessman Andrew Yang announced he was suspending his campaign, getting less than 3 percent of the vote. Yang, who advocated a policy to give every adult $1,000 a month for what he called a “universal basic income,” told supporters, “You know I am the math guy and it’s clear from the numbers we are not going to win this race.”

Minnesota Sen. Amy Klobuchar, who finished third in New Hampshire with almost 20 percent, told supporters, “Because of you, we are taking this campaign to South Carolina and Nevada. I cannot wait to win this nomination.”

Buttigieg thanked his team and husband as he congratulated his opponents, referencing his support for Sanders “as a high school student.” 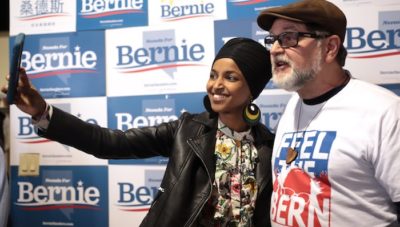 In the first exit polling data, CNN reported that 62 percent of New Hampshire Democratic voters think the party should nominate someone who can beat President Donald Trump in November, compared to 34 percent who want a candidate they agree with. Almost half of respondents, 48 percent, said they decided who to vote for either on election day or in the last few days, and 48 percent also said Friday night’s Democratic National Committee debate had an impact on their decision.

In an odd quirk that the New Hampshire primary is known for, there are some small towns that go to the polls just after midnight on election day. They account for three of the 300 precincts in the state. Klobuchar ended up with eight votes in those areas, while Warren and Sanders each received four votes.

Yang received three votes in those precincts. Biden and Buttigieg each got two votes, while Hawaii Congresswoman Tulsi Gabbard and entrepreneur Tom Steyer each got one vote. Former New York City Mayor Michael Bloomberg, who did not file to be on the New Hampshire ballot, received three write-in votes. Bloomberg has chosen to skip the first four voting states – Iowa, New Hampshire, Nevada and South Carolina – and is instead focusing on the March 3 Super Tuesday states and beyond.

Biden left New Hampshire Tuesday afternoon and flew to South Carolina, a state that pundits are calling his “firewall,” to continue campaigning there. The Palmetto State holds its primary on Feb. 29 and Biden leads in polling averages there with 31 percent support. Steyer is actually second there with an average of 18.5 percent, with Sanders closed behind at 17 percent.

Warren averages 9.5 percent for third place in South Carolina, with Buttigieg at 5.5 percent, Yang at 3 percent and Gabbard and Klobuchar at 2.5 percent and 2 percent, respectively.