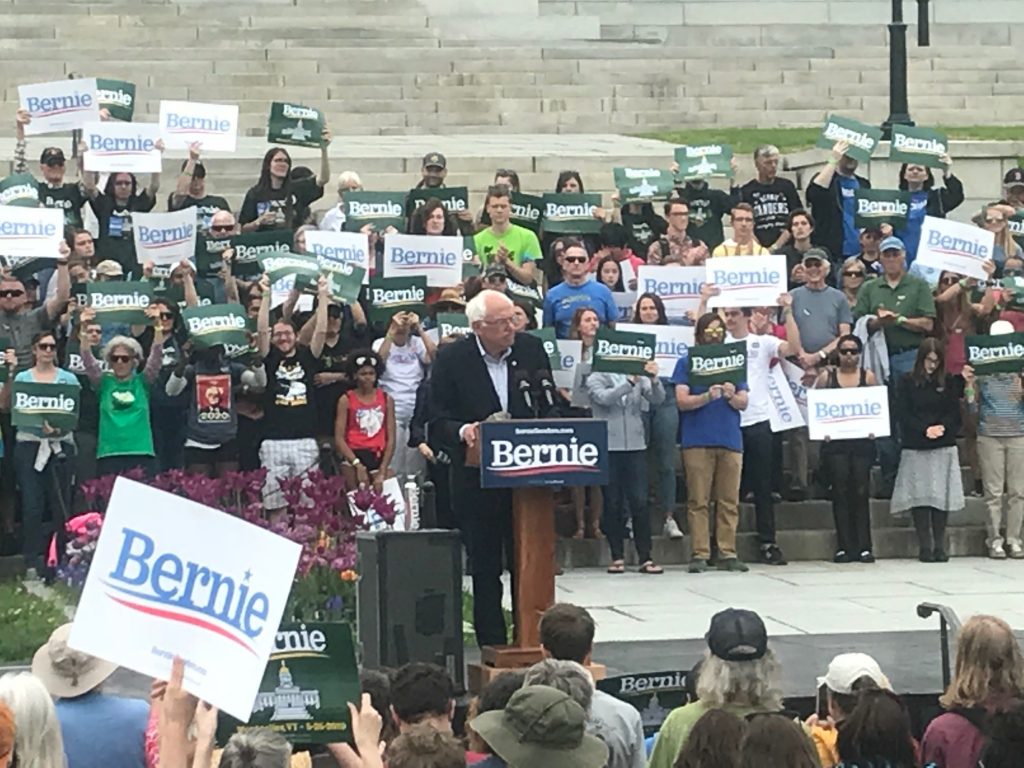 BERNIE RALLY: Around a thousand people attended a Bernie Sanders rally in Montpelier on Saturday. The presidential candidate spent much of the speech attacking President Donald Trump.

MONTPELIER — About a thousand people attended a rally for presidential candidate Bernie Sanders on the front lawn of the state capitol Saturday morning.

Although the Vermont senator stated early that his speech would not focus on President Donald Trump, there was no shortage of attacks at the current occupant of the White House.

“This is a pivotal moment in American history, and Donald Trump and his friends believe that they can win the coming election by dividing us up based on the color of our skin or where we were born or our sexual orientation or our religion,” he said. “They think getting us to hate each other is their path to victory.”

At another point in his speech, he accused the president of abusing his powers.

“We know that we have a president who has no understanding or respect for the Constitution of the United States and the separation of powers and is attempting to move every single day this country into an authoritarian form of government,” Sanders said.

The view of the full crowd.

Some of his key talking points largely mirrored the platform of Democrats and Progressives at the Vermont Statehouse this year. For instance, Sanders called for a national $15 an hour minimum wage.

“It’s not a complicated issue. In the richest country in the world if you work 40 hours a week, you should not be living in poverty, and that is why together we will raise the national minimum wage to $15 an hour,” he said. “And by the way, when we talk about wages, we believe in equal pay for equal work.”

He especially attacked large corporations such as Walmart and Amazon for making enormous profits while paying low wages to workers and little or no federal taxes.

“This very same family that owns Walmart pays its workers wages that are so low that many of those employees are forced to go on government programs like Medicaid, food stamps, and public housing,” Sanders said. “In other words, working families, you here in Vermont and throughout this country, are paying extra taxes to subsidize the wealthiest family in this country.”

Another issue in which he is on the same page with his Montpelier counterparts is energy policy.

“And when we talk about corporate greed and corporate irresponsibility, there can be no greater culprit than the fossil fuel industry, an industry which lies to us every single day about the damage they are doing to the country and the planet,” he said.

And Sanders once again promoted the ambitious program known as Medicare for All, which some estimates put the cost at over $32 trillion dollars.

“Yes, we will pass a Medicare for All single-payer program,” he said. “The time is long overdue for the United States to end the international embarrassment of being the only major country on earth not to guarantee healthcare to all and we are gonna end that embarrassment.”

Damian Renzello (on the left), of East Montpelier, was on a motorcycle with a Trump flag, striking conversation with passing Sanders supporters.

Not everyone who came to the event was there to support Sanders. Damian Renzello, of East Montpelier, was there on a motorcycle with a Trump flag, striking conversation with passing Sanders supporters.

Another person there not all in favor of Sanders was Murray Ngoima, from South Pomfret. She and a group of activists were there to protest Sanders’ support for new F-35 fighter jets to be stationed in Burlington, which she said can be modified to carry nuclear weapons.

“It’s part of the strategic nuclear bomber force, which means along with the B-52 and the B-2, those are the only three planes that are designated by the Department of Defense to be carrying nuclear weapons,” she said.

But most were there to support Sanders, such as Marit Young from Montpelier.

“Healthcare, education, minimum wage, all these things he was for them before they became popular,” she said. “Also the business about socialism, I don’t know why [people don’t embrace it], we’ve got streets being paved and police out on the highway, that’s a form of socialism when you get right down to it.”