Presidential candidate Bernie Sanders has made it a key talking point of his campaign to target Walmart — employer of over 1.5 million Americans — and insist the retail giant bump all its employees to at least $15 an hour.

No one who works for the wealthiest family in America should live in poverty. Add your name if you agree. https://t.co/t4fBbj7Vyl

In another tweet, he attacked the company’s large earnings and owners’ wealth as the reason for raising the wage.

This is why we demand an end to their greed. #BernieAtWalmart

CBS News reports that CEO Doug McMillon has been paid almost $24 million in combined cash and stock value in the past year, which Sanders sees as money that could be spent on workers.

On Wednesday, Sanders also visited Arkansas to attend Walmart’s annual shareholders’ meeting, where he advocated for the wage bump. The company’s starting pay is currently $11 an hour.

“Walmart can afford to pay its employees a living wage of at least $15 an hour,” he told the board. He also said Walmart workers should get seats on the board.

Sanders’ new campaign on Walmart is a continuation of his attack on Amazon last fall. Amazon owner Jeff Bezos gave in to the senator’s demands and raised Amazon’s wage to $15.

At a campaign speech in Montpelier two weeks ago, Sanders began training his sights on Walmart. 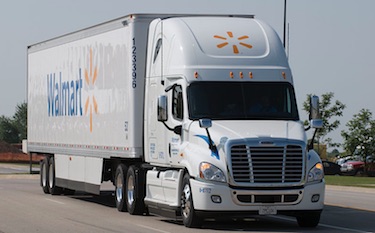 ON HIS RADAR: Bernie Sanders has targeted retail giant Walmart in his calls for a $15 minimum wage.

“In America today we have one family, the Walton family of Walmart. This is a family that is worth $175 billion — they are doing well,” he said. “Meanwhile, this very same family that owns Walmart pays its workers wages that are so low that many of those employees are forced to go on government programs like Medicaid, food stamp, and public housing.

“In other words, working families like you here in Vermont and throughout this country are paying extra taxes to subsidize the wealthiest family in this country. How insane is that?”

It was at that point in his speech that he announced his intention to visit the Walmart board meeting. He added that Walmart workers had invited him to the meeting.

According to some analysts, the total impact of the wage bump for Amazon workers may actually be a net loss due to the elimination of other benefits, including stock shares and monthly bonuses.

“His demands are just old news,” Simon said. “I mean … the things that we’ve been doing will increase the minimum wage — keep unemployment low, keep the economy on fire. And there are jobs out there that are $10, $12, $14 an hour, so we are heading in the right direction.”

He noted that the company is already paying “tens of billions” every year in taxes.

“They do a good job taking care of people to the best of their ability given the fact that their low-margin business is designed to sell products to a really broad category of people in America,” he added.

Simon said some other benefits the company pays includes an expanded aid program for young adults looking to go to college.