While speaking before a left-wing Latino audience, Democratic presidential candidate Bernie Sanders pledged to end immigration raids and impose a “moratorium” on all deportations.

“We are going to end the ICE raids that are terrorizing communities all across this country,” Sanders said Saturday in Las Vegas, according to footage flagged by the Republican National Committee. “We are going to impose a moratorium on deportations. And we are going to, as I mentioned — and there are some things that a president can do with executive orders and some things you can’t.” 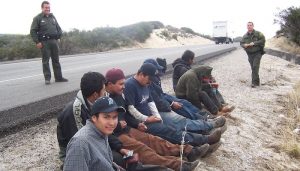 Sanders was speaking at an event organized by Mijente, a progressive Latino group that focuses on immigration issues in the U.S. Mijente describes itself not just as a movement for Latinos, but also a “pro-Black, pro-woman, pro-queer, pro-poor” group that actively promotes anti-ICE activities.

In other parts of his discussion, the Vermont senator said he would also provide illegal aliens with government-funded health care and a free college education.

Sanders reiterated his position on deportations the following day on Twitter.

“We must treat undocumented people with dignity. When we are in the White House, we will end the ICE raids which are terrorizing communities all across this country and impose a moratorium on deportations,” he tweeted on Sunday.

Though Sanders has long espoused far-left immigration views, a senior policy adviser for his campaign confirmed to CNN that the comment on deportations is, in fact, a new position adopted by the democratic socialist. Such a position likely pivots him further to the left of fellow presidential candidate Julian Castro, a Texas Democrat who had stood out among the field for his support of illegal immigration decriminalization.

A number of Democrats have come forward to warn that the current crop of presidential candidates are becoming too extreme on immigration issues, and are worried that doing so will alienate mainstream voters in 2020.

“I’m a Democrat. I’m a loyal Democrat. I want to see us win in 2020, but to do that, we’ve got to appeal to a wide the consensus out there on immigration and other issues,” Jeh Johnson, Obama’s former Homeland Security secretary said earlier this month. Johnson said border decriminalization was “way too far to the left” than what most Americans want.

In an interview that aired on Saturday, former Attorney General Eric Holder disagreed with the concept of border decriminalization, saying that “borders mean something.”

8 thoughts on “Bernie Sanders calls for complete ban on deportations”