By Ian Baldwin and Rob Williams, Ph.D., co-founders of www.OurGeoengineeringAge.org

On November 22, 2022, the New Yorker magazine featured an essay by celebrated Vermont climate change activist Bill McKibben entitled “Dimming the Sun to Cool the Planet Is a Desperate Idea, Yet We’re Inching Toward It.”

Because Mr. McKibben and the New Yorker enjoy significant environmentalist cachet in our cultural communications landscape, it is important to critique his essay, as it ignores geoengineering’s long history, its differing covert and overt purposes, and its profoundly dysfunctional use as a dangerous mechanism for “climate control.”

As the co-founders of www.ourgeoengineeringage.org, we’d like to offer some observations in response to McKibben’s article. 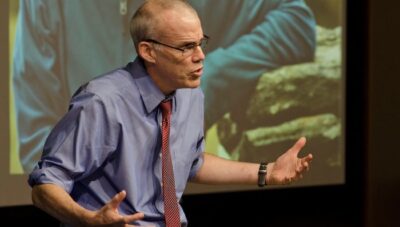 First, our sense of déjà vu. Exactly 25 years prior to McKibben’s New Yorker article, the Father of the Hydrogen Bomb, Edward Teller, wrote an Op Ed for the Wall Street Journal, “The Planet Needs a Sunscreen.” Dr. Teller’s piece concluded, a quarter of a century ago: “Injecting sunlight-scattering particles into the stratosphere appears to be a promising approach” to a warming climate. “Why not do that?”

In fact, the roots of geoengineering stretch back much further than Dr. Teller’s 1997 Op Ed, as he himself notes in his WSJ piece. Dr. Teller pointed out back then that “the U.S. Global Change Research Program’s Coordination Office has been promoting such geoengineering for three decades” (that is, since the late 1960s). And Teller further reminded his readers that the renown Princeton physicist Freeman Dyson proposed “the deliberate, large-scale introduction of such fine particles into the upper atmosphere to offset global warming” in 1979. Finally, Dr. Teller made mention of the massive 1992 National Academy of Sciences study, Policy Implications of Greenhouse Warming, which devoted 65 pages to the subject of “Geoengineering,” including a detailed discussion of SRM-type technology under the subheading, “Screening Out Some Sunlight” – 25 years before McKibben’s New Yorker heralded the (allegedly) spanking new climate engineering idea of solar-radiation-management (SRM) for its readers.

In short, there is nothing new about the idea of deploying technology to alter the weather, and by extension, the climate. It’s been done by both the civilian and military sectors since WW II. Geoengineering retains its charisma as a “news” topic because it’s shrouded in the secrecy that the Military Industrial Complex (MIC) maintains about it. The MIC allows it to suddenly appear and then disappear in major media to prepare the public, one must suspect, for the time approaching when covert military geoengineering can shift to overt, UN-sanctioned, civilian geoengineering.

To summarize — McKibben’s continuous use of “What If?” future-focused “Geoengineering-might-happen-someday” framing throughout his New Yorker article is historically inaccurate, as weather and climate modification programs have been conducted in earnest for close to a century. Environmental historian James T. Fleming’s Fixing the Sky: The Checkered History of Weather and Climate Control, published in 2010 by Columbia University Press, is perhaps the best primer on the historical emergence of and motivations behind geoengineering. In addition, we have published a number of articles that explore this history — here is but one example.

Second, McKibben fails to acknowledge the U.S. military’s long-term and ongoing strategic interest in weather and climate modification, aside from a quick nod to “Operation Popeye,” the US military’s use of climate modification to flood the North Vietnam’s Ho Chi Minh Trail during the US occupation of Indochina described in more depth here.

A 1996 US Air Force (USAF) white paper entitled “Weather As A Force Multiplier: Owning The Weather In 2025” highlights the US military’s enduring interest in the “command and control” opportunities over weather and climate made possible by geoengineering [here] . The USAF writers speak of “battlespace dominance” inside the top 600 miles of Earth’s atmosphere. The report notes such “dominance” might involve “the creation of new weather patterns, attenuation or control of severe storms, or even alteration of global climate on a far-reaching and/or long-lasting scale.” It further discusses “carbon dust,” that could be deployed in the atmosphere by “the use of afterburner-type jet engines to generate carbon particles while flying through the targeted air.” Expressed over a quarter century ago, these “battlespace dominance” ideas are undoubtedly creaky with age inside the highly dynamic, radically technological culture of the military.

Third, McKibben adopts the party line of academic pro-geoengineering proponents such as Harvard engineer and physicist David Keith, who insist that geoengineering might happen at some hypothetical future time without ever acknowledging its past and present reality. Ignoring clandestine military projects, academics like Keith use computer models to suss out the probable effects of SRM and other strategies for future climate control. In their approach to calculating eventualities, the blackboard geoengineers are closely allied with their academic colleagues who also use modelling to prognosticate the climate impact of anthropogenic CO2 and other greenhouse gases. The two groups are in fact intertwined: if there were no threat of anthropogenic (human-caused) climate warming, then there’d be no reason for such anthropogenic interventions as climate engineering.

Fourth, McKibben’s New Yorker article consists of conversations with civilian researchers conducting computer modeling exercises, rather than with scientists conducting actual field research that measures the environmental and health impacts of elevated levels of geoengineering’s nano-particulate metal byproducts in our air, soil, and water. To discover the actual ongoing environmental effects of military geoengineering on the ground, California citizen-scientist Rosalind Peterson conducted 20 years of field research and gave voluminous public testimony, including at the United Nations, about elevated nano-particulates such as aluminum in the food chain — view her work here. The medical and environmental consequences of military geoengineering are well documented by Mark Whiteside, MD, in numerous peer-reviewed science articles at our web site: www.ourgeoengineeringage.org. The thesis that coal fly ash, one of the world’s largest industrial waste streams, is being used by the military, is profusely documented by geochemist Marvin Herndon here. None of this environmentally damning material, all of it readily available on our website, as well as elsewhere on the Internet, is even mentioned by our Vermont neighbor Bill McKibben.

Yet here we are, all of us living in close conversational proximity, in our little Green Mountain communities.

Fifth, like most who report on the subject of geoengineering, McKibben ignores the very different conditions that pertain in the lower atmosphere or troposphere and the upper atmosphere or stratosphere. The weather happens almost entirely in the troposphere, where the air we breathe is constantly mixing and changing. The next layer up, the stratosphere, where the ozone is located, is, as its name suggests, stratified, relatively quiescent or calm compared to the turbulent troposphere below. It stretches from 9 to 31 miles above Earth’s surface, on top of the troposphere.

Putting nano-particulates into the troposphere has radically different effects on weather and climate than putting them into the stratosphere. In the troposphere, it turns out, particulate pollution acts to warm the planet. In the stratosphere, as blackboard geoengineers all attest, particulates cool the planet. Large volcanic explosions hurl their detritus into the stratosphere, and historically cool the planet, as did Pinatubo in 1992, whose impact is referred to by McKibben and most other geoengineering experts, including Dr. Teller, as “the Pinatubo effect.” Why this simple but vitally important distinction between the bottom two layers of Earth’s multi-layered atmosphere is rarely made in discussions about geoengineering, is confusing, unless one remembers that the MIC probably has its reasons to keep public discourse confused.

Military geoengineering, the domain of so-called weaponeers like Dr. Teller, takes place largely, and often visibly, in the troposphere, as millions of discerning sky watchers around the globe document on an almost daily basis. The story of the post-Vietnam reappearance of covert military geoengineering in the late 1990s is told here. McKibben does a reasonable job of telling the up-to-date university, blackboard geoengineering story, as it is so closely linked to the anthropogenic climate “catastrophe” and the concomitant need to intervene — to “do something” about the massive planetary system called the climate. McKibben’s failure to look at alternative evidence for anthropogenic climate change is notable.

Geochemist Marvin Herndon, whose voluminous articles on tropospheric geoengineering are archived at www.ourgeoengineeringage.org, has shown that tropospheric particulate air pollution, inclusive of military particulate geoengineering, warms our planet by creating artificial metallic “clouds” that linger in our lower atmosphere. These particulate “clouds” act as a blanket that blocks Earth’s nocturnal radiation back into space, that is, the sun’s absorbed daytime heat is trapped, because the fundamental process of convection that has cooled Earth overnight for eons has been shut down. Particulate pollution — not greenhouse gaspollution — is infrequently addressed in the scientific literature, and never addressed by those who, like McKibben, believe “the science is settled” when it comes to the causes of global warming.

In conclusion, we deserve an accurate and full accounting of the ongoing impacts of geoengineering on all living creatures, including ourselves. We suggest environmental activists and writers provide us with deeper scrutiny of the geopolitical history and environmental evidence surrounding geoengineering — past, present, and future — and we urge all citizens to get involved.

Our collective future is at stake.