Janssen Willhoit joined the Legislature only four years ago, but now the St. Johnsbury representative has given up his seat to run for attorney general following a special GOP nominating process in late August.

Willhoit has an unconventional story. He’s an ex-convict who did five years in prison for stealing money from investors years ago. But he says he’s learned many lessons in the process, and he has an inside perspective of the justice system that would help him succeed as the state’s top law enforcement official.

One thing he would like to see changed is to have fewer people experience our prison system for the wrong reasons. The Vera Institute of Justice estimates that the average annual incarceration cost nationwide is more than $31,000 per inmate. 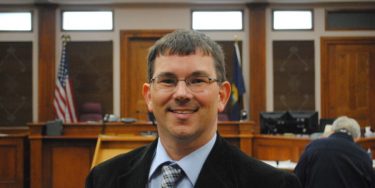 COURTROOM VETERAN: Janssen Willhoit is familiar with the courtroom, both as a lawyer and a convict. He says all his experiences have led him to conclude many reforms are needed.

Willhoit says one of the most common occurrences that lands low-level offenders in jail is the inability to make bail. When the issue of high bail costs was brought to incumbent Attorney General TJ Donovan, he agreed to set bail costs for misdemeanor and non-violent crimes at just $200.

Willhoit says $200 seems like a reasonable deal because most people can afford it, but any person who can’t may expect to spend up to several months behind bars waiting for the court system to process the case. As a result, he pledges that, if elected, he will advocate for no bail for nonviolent and misdemeanor crimes.

In addition to keeping those guilty of misdemeanors out of jail, he would like to keep all nonviolent felons out. He explained that the distinctions between misdemeanor versus felony possession of drugs are largely arbitrary determinations based on poor and outdated science.

“We have to really take a hard look at how we charge, and what our charges are when it comes to purely a possession of use-levels of drugs,” he told True North. “All of our numbers  — what we consider the threshold of a misdemeanor possession versus a felony possession — are all levels based on unfortunately bogus science.”

Willhoit said this results in even more nonviolent people sitting in jail on taxpayer dollars. He added that the state is sending mixed messages now that Donovan announced Vermont is suing Purdue Pharma for its connection with opiates. He said it’s being implied that these drug users are victims, and on the other hand the state is still treating them like criminals.

One issue that has plagued the AG’s office in recent years has been its participation in a debacle known as AG’s United for Clean Power. Under former Attorney General William Sorrell, this group of about 17 attorneys general conspired to sue Exxon Mobil for allegedly misleading the public on global warming. Yet Sorrell sought to hide these activities from the public.

Willhoit said there will be a more transparent office under his leadership. “There still appears to be a culture of ‘say no first’ with any request,” Willhoit said. “We just don’t do it.”

Willhoit admits he has clashed with some GOP colleagues on the issue of criminal justice reform. He said that makes him feel all the more honored that the party chose him to run for Donovan’s seat, which it did in late August in a special nomination session. He also said the Republican Party has been gracious toward his past transgressions, even after newspapers had run a story on his incarceration.

“I was kind of concerned and so I went to all the doors at the time –183 houses that had my signs out. I went to those houses to talk to them and see what happens. Not only did no one take down my signs, but they were mad because they were like, ‘We know you, Janssen. We talked about this.'”

His reform-minded message may be getting through to people across the state.

Jace Laquerre, an undergraduate student at the University of Vermont, and an active member of Turning Point USA on campus, says he supports the Republican candidate.

“Janssen has done more for criminal justice reform and the civil rights and liberties of Vermonters than perhaps anyone in the state,” he told True North in an email. “As a public defender and state representative he has fought against the failed war on drugs, mandatory minimums, and … has fought to give parents the right to determine where their children could go to school.”

He continued, “He believes this state’s judiciary should deliver blind justice to everyone in accordance with the law, but he also believes the law needs to be practiced with compassion and with the belief in second chances.”