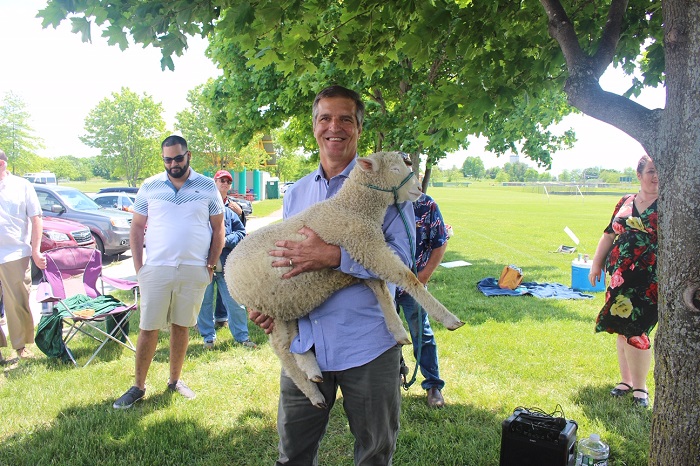 GOATS HELP WITH THE MESSAGE: Farmer and Republican candidate for governor John Klar says he’s an ordinary Vermonter tired of the status quo in Montpelier.

SOUTH BURLINGTON, Vt. — About 60 supporters gathered Sunday at Veterans Memorial Park to hear Republican gubernatorial candidate John Klar criticize Gov. Phil Scott over a possible mail-in election, his handling of the Black Lives Matter protests, and the constitutionality of his lockdown orders in response to COVID-19.

Alice Flanders, an African-American who is running for the House Windsor 4-2 District, also spoke to the crowd and urged people to see each other as Americans rather than according to race. She also led the audience in the singing of the “Star-Spangled Banner.”

For the upcoming election, Scott has told lawmakers they can draft legislation that would enable mail-in ballots to be sent to all registered voters, despite concerns from Vermont residents, town clerks and GOP leaders.

In his speech Sunday, Klar took aim at the governor.

“First of all, there’s the question of exactly how much integrity our voting system has already without mail-in voting,” he said. “Additionally we already have absentee ballots — the governor is making dramatic shifts very quickly for something that’s far in the future, something we may not even need.” 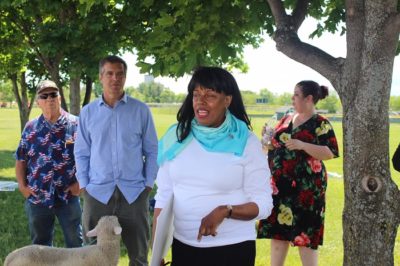 Alice Flanders, an African-American candidate for the House Windsor 4-2 District, urged Vermonters to see people as Americans, not segmented races.

Klar says it’s important for Scott to remain involved in the election decision.

“So they [state lawmakers] are removing the executive power from the consideration of a huge decision that impacts our voting rights, which is essential to our constitutional democracy and our freedoms,” he said.

Klar also commented on Scott standing by while Black Lives Matter ran an event at the Statehouse on Sunday in which non-blacks may have been banned from speaking.

The event’s Facebook page stated that the open mic is “for Black people.” The event organizers did not respond to TNR’s request for comment on whether non-blacks were barred from speaking.

“We have a compact, we have a contract for 250 years in the U.S. Constitution,” Klar said, “and if you are going to throw it out the window and you are going to allow only black people to speak on the Vermont Statehouse steps … enough already, we have to stand up against it.”

Klar also commented on what he sees as a lack of constitutional authority for the governor to continue with his lockdown measures on businesses and personal freedoms related to the coronavirus. Klar said he agrees with St. Johnsbury attorney Deborah Bucknam, who is representing Rutland-based Club Fitness in a legal challenge against the state.

“Falling short of that demonstration of medical necessity, the burden of which is on the government, Deb Bucknam is absolutely correct that this now clearly does not rise to that level,” he said. “Government also has to delineate a clear purpose — the purpose was supposed to be flattening the curve. We’re are now flattening our constitutional freedoms, there is no curve.”

Klar said this economic suppression can’t last for much longer.

“If you stifle the economy for two more months and we have zero cases, and we reopen the economy for one week and you are gonna have new cases, what are you gonna do, shut down again?” he asked.

Flanders, whose resume includes working with the nation’s military budget and as a naval aerospace engineer overseeing the nation’s nuclear weapons systems, took aim at the state’s shortfalls in education.

“Education is what makes the difference between those who succeed and those who don’t succeed,” she said. “I don’t know what California plans to do with getting rid of the SAT and the ACT requirements to get into college. Once those kids come in what are you gonna do with them?”

On the BLM protests regarding the death of Goerge Floyd at the hands of Minneapolis police, Flanders said what happened to Floyd was wrong, but that there are problems with the current social justice movement.

“The most racist people I’ve ever met have been leftist liberals,” she said. “So to be very honest, what the hell is all this going on with having to hold my hand and walk me across the street into a voting poll or whatever you think?”

Tom Licata, a resident of Burlington who came to the event, pointed out that local media were not covering the event.

“I’m disappointed,” he said. “I wish I could say I’m shocked, but I’m not, that there are no other major media here.”

Sue Lanoue, of St. Albans, said the continued restrictions on businesses reopening at limited capacity is not good enough. She has a boutique and a nail salon.

“I have two businesses with restrictions,” she said. “It’s not very good, people are afraid to come shopping. I lost nail clients and my boutique is not doing very good.”

She said the whole area is struggling from Scott’s shutdown orders.

“We went to Burlington downtown to just to have a quick breakfast and it’s very sad what this governor is allowing — it’s just all falling apart,” she said. “There is nobody in downtown Burlington, everything is closed.”

16 thoughts on “At public event, Klar takes aim at Scott over mail-in-ballots, race, lockdowns and more”