Editor’s note: This commentary is by Curtis Hier, a 33-year high school teacher and the president of the Vermont Alliance for the Social Studies.

Unfortunately, the saying has more than one meaning. Vermont is currently following Maine down the “proficiency” path in public education. No more grades as we’ve known them. Instead we would have a proficiency-based system.

It is a model favored by the Maine-based Great Schools Partnership, funded largely by Bill and Melinda Gates. GSP is a 501(c)(3), elected by no one and accountable to no one.

The local education leaderships grabbed onto this model in the name of Vermont’s Education Quality Standards, and even less accurately, Act 77. Members of these local education bureaucracies have misled the public, including teachers, into thinking that Montpelier was requiring this version of proficiency-based grading.

This Great Schools-Gates model is the 1-4 model. Homework is formative and doesn’t count. Summative assessments (quizzes and tests) can be retaken. Projects have extended deadlines. Content is not a priority. 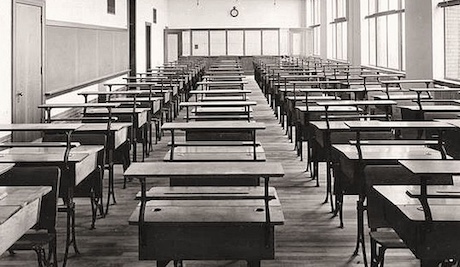 Curtis Hier: “Our schools are preparing students for college, the workforce, and the military. The practice of not counting homework, giving extended deadlines for papers and projects, and allowing retakes on quizzes and tests does not prepare students for any of these three pursuits.”

Administrators from around the state made a pilgrimage to Casco Bay, a Portland lottery school built by Gates in 2005 that is held up as the model proficiency-based grading school. Administrators received some training. But they’ve never taught a day using PBG. Nevertheless, their enthusiastic opinions were eagerly sought at a recent State Board of Education public hearing.

And the administrators are wrong. The new system is disastrous.

The qualitative research is in. A Vermont NEA survey indicated that 72 percent of actual classroom teachers think PBL is demotivating. A brave teacher who spoke at the Board of Education hearing on behalf of as many as 70 percent of Rutland High School’s teachers said the PBG system creates “significantly more apathy and mediocrity in the classroom.”

Our schools are preparing students for college, the workforce, and the military. The practice of not counting homework, giving extended deadlines for papers and projects, and allowing retakes on quizzes and tests does not prepare students for any of these three pursuits.

The GSP-Gates model is demotivating certainly because of not counting homework, allowing extended deadlines, and offering retakes. But also because it is so confusing. It’s almost impossible to explain to students how their grades are computed. Some proficiencies get assessed many times, some once or twice, some not at all. The ones that get assessed many times decay. The grading system is like a convoluted Rube Goldberg contraption. Students don’t understand it, so they don’t know whether it’s worth it to make an extra effort.

Research does show that students do better when they know what’s expected of them, but showing them dense rubrics with language-tortured proficiencies just makes their eyes glaze over. A group of students representing the Rutland High School Student Senate issued a statement at the Board hearing that said: “We believe we got the same amount of feedback in the old system compared to this new one through four grading system.”

Nobody knows what a 3 is exactly. Is it an 85? An 88? A 90? It’s proficient. So teachers give lots of them. And many students seem content with them.

The past few decades have seen quite a few fads in education come and go. Like open space classrooms. It was supposed to promote collaboration, but teachers were finally driven to distraction and erected bookshelves and crates, anything to block out other classes. Dividers went up, and soon rooms were evident.

Whole language reading instruction in the early grades left high school teachers facing a string of students over a span of several years who could not spell. They were casualties of the reading wars.

But this is far worse. It’s discouraging our top students. And it’s rewarding other students for bad habits.

Today’s buzzword in education is “equity.” Does PBG promote equity? Absolutely. Flattening out the grade scale will give students with low income parents scores close to those of students with high income parents. But standardized tests will likely continue to show an achievement gap.

This is one more reason to support school choice. Schools such as Rice and MSJ are touting their traditional grading systems. Our students need an escape hatch from our monolithic and Gates-dominated local public school leaderships.

Maine is abandoning this disaster. We should too.

12 thoughts on “As goes Maine so goes Vermont: Our proficiency-based grading debacle”