Bruce Shields, a resident of Eden, is one of many Vermont voters who have experienced troubles the new mail-in voting system. While he voted normally in the August primaries, he has discovered that he’s not even listed in the voter system for the general election.

“That seemed very strange because we received our primary ballot in the normal way in July,” Shields told True North by phone.

He checked at the secretary of state’s website to see his voter-status, but his name didn’t show up. In a follow-up email, Shields said he eventually received his ballot. The hold-up, he said, had to do with a change of 21 post office box addresses from Wolcott to Morrisville from several years ago. When that took place, the voter list was not updated accordingly. 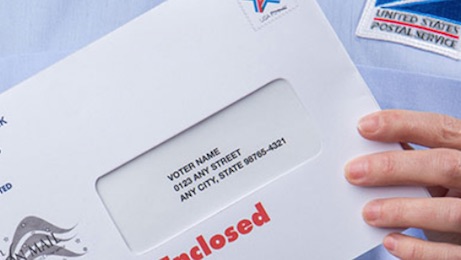 Vermont’s universal vote-by-mail system was set up to prevent the spread of the coronavirus, but has led to a flood of ballot mishaps that can result in voter disenfranchisement or fraud.

“It appears that the voter checklist is not automatically synchronized with the Grand List of taxpayers,” he wrote. “The Grand List has been correct for many years, but no one at the town level reviewed the checklist address. And so, predictably, my ballots were mailed to Wolcott, which cannot accept them and is forbidden from forwarding them.

“Because it was legal ballots, they did return them to the sender [the Eden town clerk] who affixed change stickers to my and my wife’s ballots, and they arrived in the mail about three hours after we spoke [on Oct. 13].”

Shields has experience working on voter checklists for Eden in the lister’s office, and he said maintaining accurate mailing lists is a challenge — people routinely move and change names. He said even a small amount of voter fraud in a close election could change the outcome.

“There is an opportunity for abuse, and I’ve participated in two widespread vote recounts where the vote was very close. It would not take a lot of people gaming the system to change the vote in that.”

Mark Donka, of White River Junction, is a candidate for state representative for the Windsor 4-1 district. He is another Vermonter who has reported problems with ballots. Specifically, his son-in-law did not receive a ballot for the general election even though he has voted for the last five years from the same address. When the family member contacted the town clerk to find out what went wrong, no answer was provided.

“They couldn’t give an answer of why he didn’t get one because they said they had sent them out to everybody,” Donka said. “He is on the voter list, so obviously everybody is not getting it or they are disappearing somewhere in between.”

The incident fueled his doubts about mail-in voting.

“I think it’s crazy that we have to have mail-in voting,” Donka said. “I don’t see any reason for it. if you can go to the grocery store or Walmart I would guess you can probably go to the voting booth.”

For LeeAnne Godin, a resident of Morrisville, the ballot mix-up had to do with getting an extra ballot sent to her husband.

“We actually have two mailing addresses and they sent one in his name to the other address,” she said in a phone call with True North.

“They [the town clerk’s office] basically told him to destroy it or just drop it in the ballot box,” she said. ” … Who’s to say that they can’t do something with it?”

Godin said that she is not a fan of the new mail-in policy.

“I don’t think it’s proper; it wastes money and it gives more opportunity for fraud,” she said.

Francesca Hahn, of Burlington, didn’t get her ballot by mail, but she received someone else’s.

“When I realized I hadn’t gotten it I called the town clerk’s office in South Burlington and apparently it did go to my old address,” she said. “They were able to check and it had not been voted and sent it back, so I was able to register in Burlington.”

The ballot she received wrongly, which belonged to someone else, reminded her of how she gets all kinds of mail that is intended for other addressees.

“To be honest, I get mail for like five different people still,” Hahn said. ” … Especially in downtown Burlington, where these buildings have seven or eight apartments, they are not going to reach people. I put it back. I have a heck of a time getting packages so I can’t imagine that all these ballots are getting to the right people. I could have easily just voted on that ballot.”

Kelsey Bean, a resident of South Burlington, says received a ballot at her parents’ house in Essex and two more ballots at her home in South Burlington. She’s been registered to vote at her current address for about a year.

“Literally, the following day when my mom got my ballot at home, I got another one with my same information sent to myself,” she told True North. “It is frustrating — someone isn’t doing their job or is not crossing me off the list. Who knows how many other people are getting [extra ballots].”

Other cases of mail-in ballot mixups across the state include Joseph Duquette, of Milton, who received an extra ballot intended for the previous owner of his home.

Brian O’Folan received a ballot from his hometown of Roxbury and received another ballot from Waterbury where he owns a business.

June Louras, of Rutland, also received a ballot intended for someone else.

For those who are curious, the My Voter Page on the secretary of state’s website allows voters to see if their ballot was voted and received at the local town clerk’s office.