A new treatment for COVID cases is seeing many medical professionals and even state and national governments endorse its use, yet the larger medical establishment, such as the National Institutes of Health, are not on board.

“Treasure Valley pharmacists and officials are seeing more doctors prescribe ivermectin to treat and prevent COVID-19, going against the recommendations of federal and worldwide health officials, who say doing so can be dangerous,” Idaho Statesman reported last month. 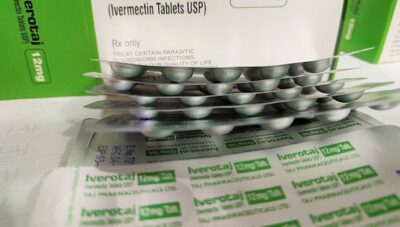 NEVER GOOD ENOUGH?: Ivermectin is the latest drug to gain popularity for its ability to effectively treat COVID-19, yet the medical establishment is currently not supporting the remedy.

Ivermectin, a drug created in Japan in the 1970s, has been used to treat a variety of diseases, from head lice and parasitic worms to onchocerciasis, a parasitic disease spread by flies. Now it is being touted in Japan, Brazil and elsewhere as an effective treatment of COVID-19.

Most recently, Joe Rogan, the 54-year-old host of the popular “Joe Rogan Experience,” has tested positive for COVID and is taking ivermectin to fight the virus.

The National Institutes of Health reports ivermectin is also being evaluated “for its potential to reduce the rate of malaria transmission by killing mosquitoes that feed on treated humans and livestock.” The NIH adds ivermectin is “not approved for the treatment of any viral infection.”

However, the organization admits the drug has anti-inflammatory properties “which have been postulated to be beneficial in people with COVID-19.”

At least one nation has endorsed ivermectin as a treatment for COVID-19. The Indian state of Goa is giving the drug to all adult residents in an attempt to reduce the harm caused by COVID-19 infections.

A similar response to hydroxychloroquine

This is not the first time the medical establishment and health professionals have been at odds over COVID-19 treatments. In the early stages of the virus, there was a disagreement over the use of hydroxychloroquine, which was endorsed by President Donald Trump, among others.

While early cases from users of the relatively affordable drug seemed to indicate strong success, the media and many in the medical establishment universally condemned its use as a Trump-related conspiracy.

14 thoughts on “Another drug to treat COVID embraced by health professionals, rejected by medical establishment”