At least 21 school districts are considering going to court if the Agency of Education forces mergers on them, and they’ve got a group of lawyers ready to go, including one well-known Act 46 opponent.

Last Thursday, H. Brooke Paige made closing statements to the Vermont Supreme Court challenging the constitutionality of the state’s school district merger law Act 46. Already, another lawsuit is just around the corner to prevent the state from forcing consolidation. 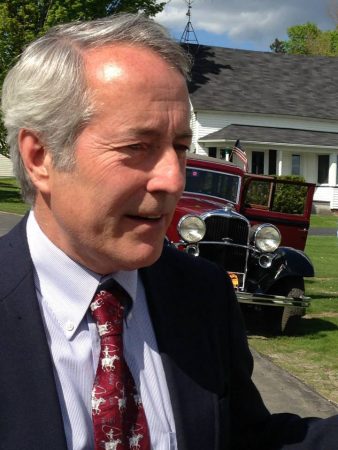 PICKING UP THE FIGHT: While the State Supreme Court is still working out a decision for a current lawsuit against Act 46, lawyer David Kelley is building up his own team of colleagues and plaintiffs to bring to court if the current effort falls short.

“I would fully expect that they are going to attempt to force mergers on at least some that have asked for alternative governance structures and have been denied by the agency,” David Kelley, a lawyer and vocal critic of Act 46, told True North last week.

An alternative governance structure is a form of district governance which does not adhere to the requirements of Act 46, primarily that at least 900 students comprise the district.

Kelley said based on the board’s decisions, he and the schools in question will know “if and who we will go to court with.”

On Wednesday, the State Board voted to force mergers of the Brattleboro Union High School board with the Brattleboro, Putney, Guilford and Dummerston boards. They also voted to merge the Washington Central Supervisory Union school boards of Berlin, Middlesex, Calais, East Montpelier and Worcester.

“What they’ve decided is still provisional until they put out a final plan,” Kelley said. “It does seem like things are heading in the direction that we feared.”

Last Monday, Kelley sent a letter to the Agency of Education outlining a list of grievances that he and his clients have with the implementation of Act 46. The letter is addressed to Krista Huling, chair of the Vermont State Board of Education, Molly Bachman, general counsel for the AOE, and William Griffin, chief assistant attorney general.

In the letter, Kelley accuses the AOE of changing the rules for an alternative governance request at the 11th hour.

“They had gone and created all of these new points about how they are going to make these judgments, and it’s a little late laying out points,” he said.

In the letter, Kelley alleged the AOE is not doing its due diligence on vetting the alternative governance proposals before rejecting them.

“This document, if adhered to by the State Board, would force mergers onto a significant number of the 37 districts who seek to remain independent, without the board even engaging in a discussion of the underlying Alternative Governance Structure proposals submitted by those districts,” he wrote.

A spokesperson for the AOE told True North that agency officials do not comment or ongoing or potential litigation. Calls to the State Board and the attorney general’s office have not yet been returned.

Kelley said he’s keeping an eye on Paige’s case against Act 46 as well.

“I think he’s well-intentioned. He’s worked hard … I certainly sympathize with his feelings,” he said.

“Mr. Paige is arguing that Chapter 2, Article 68 of the Vermont Constitution does preclude the legislature from compelling mergers of multiple towns. I read it, and that is literally what article 68 said.”

During Paige’s Supreme Court hearing, the state counselor chose to challenge Paige’s standing rather than address his constitutional argument. Kelley said that could a blessing because if the court were to dismiss Paige’s case based on standing, that leaves the door open for their new case to come in with strong standing, and they can again push the constitutional argument, among other issues.

Kelley said his group’s case will be different.

“It will be substantially more complicated — there would be multiple plaintiffs if we go to court, and probably in the neighborhood of a dozen issues,” Kelley said. “I think there are equal protection issues, due process issues, issues with the U.S. Constitution, the Vermont Constitution, issues about legislative intent, the power of an appointed agency to impose un-voted-on debt to communities from another community, there are takings issues.”

Kelley said once the State Board has finalized its plans, he and his colleagues and plaintiffs will decide their next course of action. He did emphasize that the prospects of a court case look pretty strong.

“It’s certainly starting to look that way,” he said.

4 thoughts on “Another Act 46 lawsuit is brewing”