With labor shortages taking place throughout the nation in most industries, Vermont’s nursing sector will look to incentivize the hiring of new nurses in an effort to fill the gap in services.

A new report called the “Health Care Workforce Development Strategic Plan” calls for increased investments in programs meant to make nursing positions look more attractive, such as tax incentives and housing incentives. On Wednesday, the plan was presented to the Green Mountain Care Board. 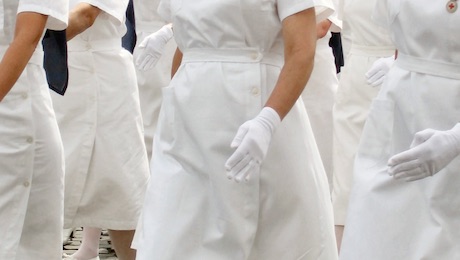 MORE NURSES NEEDED – Labor shortages have hit the nursing sector, including in Vermont. Some observers suggest the shortages could be related to vaccine mandates.

Jill Mazza Olson from the VNAs of Vermont said, “On behalf of our organizations, we want to thank the Administration and lawmakers for their work to address this crisis. We need immediate and comprehensive action to ensure that enough providers are available to give Vermonters the right care in the right place at the right time.”

Even before the coronavirus, Vermont was in need of about 5,000 more nurses during 2020, the report notes.

The release notes those who have been forced into quarantine for positive COVID-19 tests have added strain to the system.

“These conditions contribute to a vicious circle where understaffing leads to increased burnout and an even weaker health care workforce,” it states.

There is a wide range of benefits proposed to improve employment for nurses in Vermont, including loan forgiveness, scholarships, child care, housing support, and tax incentives.

“Vermont’s high cost of living and lack of affordable housing and access to child care is commonly cited as significant barriers for workers,” the report states.

Devon Green from the Vermont Association of Hospitals and Health Systems added, “When we do not have caregivers for long-term care facilities, patients stay in the hospital. In turn, that bed is not available to the person needing trauma services. When a person cannot find a primary care provider or dentist, they end up in the emergency department causing further strain.”

Laura Pelosi from the Vermont Health Care Association said, “This is a national problem, Vermont will need to take bold action now to compete with other states.”

Around the nation, some political observers are suggesting the shortages could be related to vaccine mandates.

One emergency nurse who was fired for refusing vaccination in Virginia told a news station that his hospital was mischaracterizing the nurse shortage. He insists that vaccine mandates are playing a substantial role in agitating the situation.

McDowell also said that the virus itself was being mischaracterized to the public.

“The narrative that we’re being told didn’t really line up with reality,” he said. “Most people of working age aren’t at a risk, they are not of a big risk category for contracting it.  As much as people always say well do your part for humanity. I say well I have a family, and what good am I to my family if I get injured by the vaccine?”

The vaccine requirements for nurses in Vermont varies some at each hospital. At least five hospitals, as of August, were requiring nurses to take a COVID-19 vaccine as a condition of employment.

CenterSquare.com put out a report about nursing shortages in California.

“The recent federal mandate requires health care workers at Medicare- and Medicaid-funded hospitals to take the COVID-19 vaccines or the facilities where they work would lose federal funding,” the report states. “The order has resulted in nurses and medical staff nationwide saying they would instead retire or sue. Major health care unions have also said they will sue, arguing the order violates the very federal law used to issue the vaccines to begin with.”

The full text of the report on Vermont nursing shortages can be read here.