Dr. King is also a former member of the Georgia House of Representatives and a veteran of the civil rights movement. You can hear the seven-minute interview here.

King says non-violence must start in the womb. “LIfe is a civil right. Abortion is a civil wrong. That baby in the womb is not his or her mother’s body. That is a separate and distinct individual with a human personality. My uncle, Martin Luther King Jr., said, “When you value the human personality, you won’t kill anyone.” 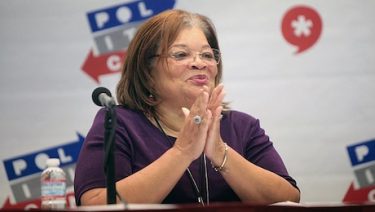 “The answer to violence is not more violence. We have to have peace so that we can discuss and solve these problems,” King said. “All of this tearing down statues and desecrating parks and tearing up real estate…..is not necessary. We don’t want to tear up our nation and our community with rioting.” Instead, King said, “We need to confess to God, ‘hey we got it wrong, we want to get it right, help us.’”

“Many white Americans are not sure how to act, react or respond,” Sheppard said. “So could you help us with being on the right side of history?”

“The right side of history is understanding that we are one blood, one race — Acts 17:26,” Dr. King said. “We are not colorblind. If you’re color blind, you need glasses, that’s a medical condition. Our ethnicity is a special gift. Every ethnic group has something to offer. We don’t kill, disrupt and destroy. We just don’t do that.”

The bible verse to which Dr. King refers — “From one man he made all the nations, that they should inhabit the whole earth; and he marked out their appointed times in history and the boundaries of their lands” — was spoken by the Apostle Paul to a gathering of Greek philosophers in Athens.

“Black Lives Matter people are going to get mad if you say all lives matter, but they do … all human beings matter,” Dr. King said. “We are a human family. Yes the African American community has been mistreated in America. So has the Irish American. So has the native American.

“We must learn to live together as brothers and sisters, and we’re not going to perish together as fools. But the Black Lives Matter situation comes from a wounded community, a hurt community, that has really been hurt,  and that’ s why it’s there. We need to talk, we need to repent as Americans.”