This article by Jim Therrien originally appeared Jan. 14 in the Bennington Banner.

BENNINGTON — A report on racially motivated harassment of former state Rep. Kiah Morris issued Monday by Attorney General T.J. Donovan found incidents of harassment but nothing that met the threshold of a criminal offense under current state law. 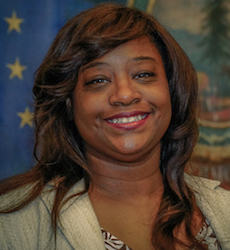 The report was released during a packed news conference that featured strong emotion, calls for renewed efforts to overcome racism, disruptive behavior, jeers, shouting and singing.

About 100 members of the media, public officials and area residents attended.

In general, the investigation conducted by Vermont State Police and computer forensic personnel concluded that “Kiah Morris was a victim of racial harassment,” Donovan said.

But the report did not find that there was sufficient evidence of criminal behavior. That also was the conclusion of local police and Bennington County State’s Attorney Erica Marthage during two sets of harassment complaints from Morris — both roughly corresponding to the election seasons in 2016 and 2018.

Images courtesy of Lou Varricchio/TNR and state of Vermont