Affordable housing borrowers in Vermont aren’t being expected to pay back loans, but that arrangement raises questions about IRS definitions of a bona fide loan in low-income tax credit projects.

In one of the few studies on the subject, a Gov. Jim Douglas-era report on affordable housing showed incomes of Vermonters in low-income housing were in a slight upward trend. The report’s data demonstrated that many low-income loans should be repaid to better help the state’s bottom line.

What is the trend since 2009, when that report published?

“Since 2009, median household income among Vermont’s tax credit unit residents has changed very little, increasing 1.4 percent each year on average — less than the 2 percent rate among all renters in the state, as of 2015,” VHFA Director Susan Carpenter told True North in a July 24 email. 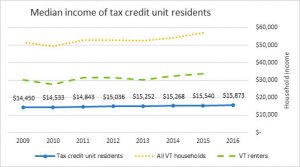 Among all Vermont households (both owners and renters), median household income increased by 1.7 percent annually on average between 2009 and 2015. (VHFA graph)

In a June interview with True North Reports, Carpenter said Vermont’s affordable housing program doesn’t want to raise rents to help pay back loans because “if the incomes of the residents remain low … there is no room in the rents to pay back these loans.”

RELATED: VHFA director: There’s little expectation that mortgages will have the capacity to be paid back

But if the state doesn’t expect borrowers to repay, that raises questions about whether or not the loans meet the IRS definition of a bona fide loan in low-income tax credit projects.

As defined by IRS guidelines, a bona fide debt is one “which arises from a debtor-creditor relationship based upon a valid and enforceable obligation to pay a fixed or determinable sum of money.”

As enacted by Congress as part of the Tax Reform Act of 1986, the purpose of the credit was to encourage new construction and rehabilitation of existing buildings as low-income rental housing for households with income at or below specified income levels.

Do Vermont’s affordable housing loans meet IRS guidelines? It’s hard to find out. According to the website of the U.S. Government Accountability Office (GAO), “the Internal Revenue Service oversight of the Low-Income Housing Tax Credit program has been minimal.”

GAO reports that since 1986, the IRS conducted only seven audits of 56 state housing finance agencies (HFAs) on which the federal tax agency relies to administer and oversee the program.

Thus, it appears unlikely that a state entity in violation of federal law would come under IRS scrutiny.

“Without such reviews, IRS cannot determine the extent of noncompliance and other issues at HFAs,” GAO states.