Protect Our Wildlife Vermont is unhappy with the current Fish and Wildlife Board and wants to see the governor appoint more non-hunter and non-trapper types to fill future vacant seats.

A recent statement from the Stowe-based advocacy group took aim at Republican Gov. Phil Scott for his appointments to the 14-member board that votes on and enacts fish and wildlife regulations.

“Last week, Governor Scott ignored numerous emails and phone calls from Vermont residents who asked him to diversify the Fish and Wildlife Board, which makes all regulations pertaining to hunting, trapping, and fishing,” the group’s press release states. 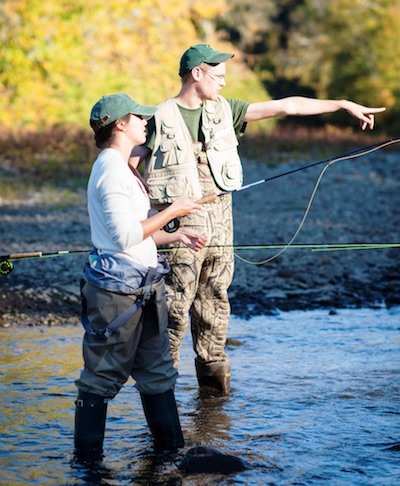 MORE ANIMAL RIGHTS?: Protect Our Wildlife Vermont wants non-sportsmen types to be appointed to the Vermont Fish and Wildlife Board.

Three open seats on the board recently were filled with people considered to be experienced outdoorsmen.

“By appointing three lifelong hunters, the Governor rejected concerns that the Board needs to better reflect the opinions and concerns of all Vermont citizens, not just the estimated 16 percent who hunt, trap, or fish. Many have asked for a bipartisan appointee, such as a wildlife biologist to fill a vacancy, to no avail,” Protect Our Wildlife’s statement continued.

Brenna Galdenzi, president and co-founder of Protect Our Wildlife, told True North it’s not just animal rights people who would like a seat at the table.

“We’re not even recommending a PETA-like a person,” she said. “Maybe a wildlife biologist, or just someone with a bipartisan view.”

The board’s 14 seats are appointed by the governor and have six-year terms. Galdenzi said non-hunters and trappers are discouraged from the application process.

“Why even put out an application?” she said.

Some policies set by the board include expanding bobcat and otter trapping seasons, as well as banning the hunting coyotes.

Galdenzi claims a large portion of the public feels ignored because the board has two members who are trappers while less than 1 percent of Vermonters participate in the activity. She noted that another board member is a taxidermist.

Galdenzi added that the board “loses the flavor of democracy in a wildlife governance model,” which matters in decision-making situations.

Protect Our Wildlife Vermont supports H.190, a bill in the House Natural Resources Fish and Wildlife Committee that addresses the wildlife governance model.

“The legislature has determined that these are legal activities, and in fact, the right to hunt and fish is enshrined in the Vermont Constitution,” he said. “It’s somewhat strange that they would try to curtail those activities by having their own representatives on the board.”

Porter disputed allegations from Protect Our Wildlife that the board has deviated from scientific advice on bobcat hunting season and bait-fish regulation.

“They presented those as if the board did not follow the department’s scientific advice, and in fact they did,” he said. “So I thought that was kind of a curious example.”

He added that the board is supposed to be filled with people who are experienced in what they regulate.

“The board’s role is to fulfill the legislatively mandated legal hunting/trapping regulations,” Porter said. “The idea that the board should be made up of people who oppose the legality of activities is somewhat strange.”

He added that a comparison could be made to other state boards and the types of members appointed to hold those seats.

“The dental board has dental hygienists on it; the board of architecture has architects on it,” he said. “There are a lot of state boards that have practitioners or people who are involved in these activities who sit on those boards. In New Hampshire, for example, you have to have a hunting or fishing license to be on the board.”

Porter maintains that the board has acted effectively and ethically with regard to wildlife regulations and violations.

“We vigorously enforce seasons, magazine limits, how you hunt, how you take animals,” he said. “We have the second largest state law enforcement agency and we’re devoted to enforcing those rules and those laws.”