MONTPELIER, Vt. — The state’s land use and development law has been on the books for almost a half century, and now a new commission is going back to the drawing board to see what the next 50 years should bring.

Passed in 1970, the purpose of Vermont’s Act 250 was to mitigate development impacts via an application process that takes into account environmental and community components of projects that exceed certain specifications. 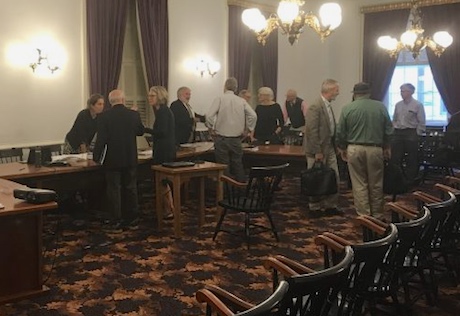 ACT 250: After 50 years of guiding development in rural Vermont, Act 250 is being revisited to see where it works and where it needs fixing. A new commission met Wednesday morning for this task.

The law was largely the creation of a commission appointed by former Gov. Deane C. Davis to address a concern that development was getting too aggressive for Vermont’s rural setting.

On Wednesday morning at the Statehouse, a new Act 250 commission and other policy experts convened in the first formal meeting for revisiting these regulations. The new commission is part of Act 47, passed out of the Senate Natural Resources and Energy Committee earlier this year.

Sheldon and Pearson were elected to serve as chair and vice chair.

“To me, Act 250 is the DNA of development for the state of Vermont,” Senate Energy Committee Chair Christopher Bray, D-Addison, told True North. “It’s been sort of the instructions for how we want to see the state develop.”

He said that for the past 50 years the development law has played a critical role in shaping the Vermont we know today, but now it needs a reassessment.

“Vermont has changed a lot in 50 years,” Bray said. “So this was an opportunity to hit pause and look at it with a clean slate and say, ‘If we were to write this law again right now, what would it look like?’”

Bray said around 98 percent of projects are approved under Act 250 after undergoing a community process that attempts to accommodate both proponents and opponents of a project.

“For the very small percentage who don’t get approval, they can be quite unhappy with it,” he said. “So, from my point of view, we should be approving every project that fits our planning paradigm.”

Bray said there are a handful of municipal policies that Act 250 projects adhere to, including town plans, regional plans and state policy goals on the environment and energy.

During the meeting, Deen set out his vision for the commission.

“Part of this effort is to educate Vermonters that there is this tool to control future development in the state of Vermont,” he said. “It’s been a lot of years and most people never interact with it, other than what they read in the newspaper.”

During the event, McCormack said the commission’s goals must be clearly defined for the group to be effective.

“The first thing you want to decide is, what are the outcomes you are looking for? Because you don’t know if the thing has succeeded or failed if you don’t know what it was intended to do.”

He said when Act 250 was passed, the right balance of development and restriction was maintained.

“In the late ’60s there were people who really wanted to stop all development. Just preserve Vermont, it’s perfect the way it is, save it. The so-called non-growthers.”

Counter to that were the pro-development people.

“I think the ideal kind of compromise is not meeting in the middle, but honoring the concerns of both sides. The message to Act 250 developers is, ‘Yes, you can do it. The business of America is to do business. But you are going to have to do it right.’”

McCormack said going forward he is going to keep an open mind.

Among other things, the commission will deliver a report that analyzes how Act 250 has performed and offer recommendations for improvements.