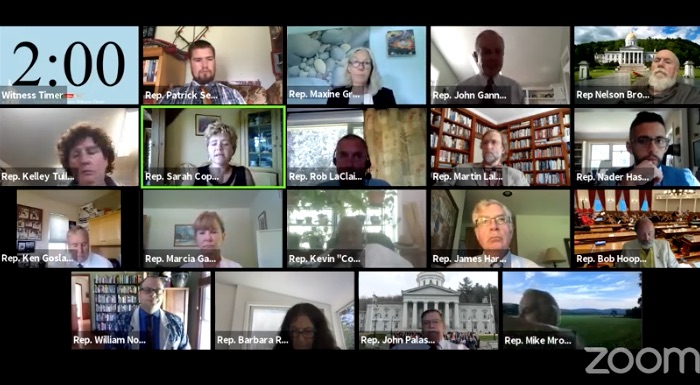 The House Committees on Judiciary and Government Operations held a public hearing Thursday on proposed changes to law enforcement in Vermont.

The House Committees on Judiciary and Government Operations on Thursday held the first of its three virtual Public Hearings on Police Reform. From these hearings may well flow new legislation cracking down on the rights, effectiveness, and funding of Vermont police.

In anticipation of these hearings, the Vermont Public Interest Research Group (VPIRG), Justice for All, the ACLU of Vermont, and several other lobby groups published 10 police-control recommendations in a document entitled “Re-imagining Policing in Vermont.”

Policing in Vermont isn’t perfect. Injustice happens. When it does, citizen advocates and the Legislature respond with plans to ensure that all people are treated justly. At least eight of the 10 “re-imagining” recommendations merit close scrutiny before becoming law. For example:

In other words, “you-bust-me-I-sue-you.” Police now receive qualified immunity, defined as “immunity from civil suits unless the plaintiff shows that the official violated ‘clearly established statutory or constitutional rights of which a reasonable person would have known’.” Without it, virtually any arrest or even intervention could and likely would result in a civil suit, aided and abetted by ‘victims’ rights’ groups like the American Civil Liberties Union and Vermont Legal Aid. And, legislation ending QI would no doubt include expanded government funding for ‘victims rights’ groups to help citizens file their suits.

Eliminating immunity for police might also seem hypocritical coming from a Legislature whose absolute “sovereign” immunity is already enshrined in the Vermont Constitution. Article 14 says “The freedom of deliberation, speech, and debate, in the Legislature, is so essential to the rights of the people, that it cannot be the foundation of any accusation or prosecution, action or complaint, in any other court or place whatsoever.” Likewise do Vermont municipalities enjoy sovereign immunity, according to the Vermont League of Cities and Towns: “Sovereign immunity protects governments from liability (legal responsibility) from unlawful acts. (e.g., negligence, trespass, nuisance, etc.). Even though municipalities are not sovereign entities, sovereign immunity extends to them due to their status as political subdivisions of the state.”

Remove police from schools. The presence of “school resource officers” (SROs) disproportionately harms students of color, students with disabilities, and low-income students. We must end the use of police in schools and invest in educational support services.

Two years ago, when a pandemic of active shootings was infecting American schools, a near-miss in New Haven led the Vermont Legislature to enact gun control because the safety of students trumped all. If VPIRG/ACLU etc. get their way, there will be no Glock-toting sheepdog on duty to protect the sheep – including those of color – when the wolf with the semi-auto slips past the front door. And if not a nearby resource officer, who will stop the next angry man-child from assaulting a fellow student? His teacher?

“Petty offenses” like – what? It doesn’t say. Shoplifting? Aggressive, threatening pandhandling? Public intoxication? Trespassing and property damage? VPIRG and the ACLU may want to live in a Vermont where the police don’t respond to calls by frightened citizens enduring threats or actual “petty” violence and robbery. But most Vermonters have seen the footage from “low-level legal” jurisdictions like San Francisco – and they don’t want that here.

Ban police use of military-grade equipment and techniques. Police militarization is unnecessary and dangerous. Giving police military equipment encourages the use of paramilitary tactics with civilians, including no-knock raids, as well as abusive “crowd control techniques,” such as use of pepper spray, rubber bullets, tear gas, and sound canons [sic].

Without crowd control, how will police respond if organized rioters like Antifa or Black Lives Matter decide to riot en masse in Vermont, as is happening now in cities on the Woke West Coast? Perhaps even more worrisome, how will Vermont’s extremely well-armed citizenry respond when they realize the police can’t protect them? The Legislature will answer these questions fully and forthrightly – unless of course it is amenable to anarchy and lawlessness, as are elected leaders in Seattle and Portland.

Require appointment of independent counsel outside of State’s Attorneys and the Attorney General’s office to review and prosecute police misconduct.

Independent counsel are often redundant and always expensive. Many Vermonters elect and expect officials to uphold the Constitution even when it’s uncomfortable to do so, not to have them fob off the job to an unelected appointee.

Increase transparency so that police misconduct cannot be concealed. That includes ending confidentiality for officer disciplinary records and other limits on public access to information.

As with “qualified immunity,” this request of “transparency” is another “do as I say, not as I do” singling-out of police. When the records of the Vermont Attorney General, the governor, and the Legislature are fully open to public review – and by design, they’re not – lawmakers could fairly and openly have this discussion.

Establish community control and authority over law enforcement, including over police priorities, transparency, and discipline, and end collective bargaining agreement provisions that limit oversight and accountability.

The end of collective bargaining would make Vermont a union-busting state. Which it’s not – as demonstrated by the teachers’ union stranglehold on school funding, and the state employee union’s powerful influence on state spending.

Some in the media dispute the cop-teacher union comparison because ‘a teacher has never shot a student.’

Sure – but when was the last time a person of color was killed by a Vermont police officer? On a recent Google search of Vermont murder victims, Vermont Daily went back about three years and found precisely none. We did, however, find several shootings of black men by other black men, including some that were drug-trafficking related and presumably could have been avoided by more effective policing. Passing a law to stop Vermont police from killing black people is a solution in search of a problem. In fact it would allow a progressive government to repopulate police forces with its own.

Also, when union-protected public school teachers practice and preach intolerance for questioning the Black Lives Matter movement and other progressive ‘sacred cows,’ they do harm their students. Freedom of thought, freedom of speech, and rational discourse used to be the hallmark of American public schools. A citizenry without them cannot maintain a free republic. Squelching unpopular thought in the classroom should concern anyone who professes to care about minority rights.

And finally, and predictably, VPIRG/ACLU et. al. want to defund the police.

Recently Vermont officials were horrified to learn that many inmates held out-of-state have been infected with Covid-19. Gov. Scott suggested the Legislature revisit his suggestion to build a new prison to replace today’s inadequate facilities. The “decarceration” movement considers building new prisons a non-starter. Progressive lawmakers instead would empty and close our prisons and replace them with some kind of mental health system.

In 1787, a Philadelphia mover and shaker named Elizabeth Willing Powel asked Ben Franklin if the Constitutional Convention would produce a republic or a monarchy. Franklin famously replied, “a republic, if we can keep it.” At tomorrow’s public hearing, and with the ballot next week and in November, Vermonters of all opinions have this opportunity.