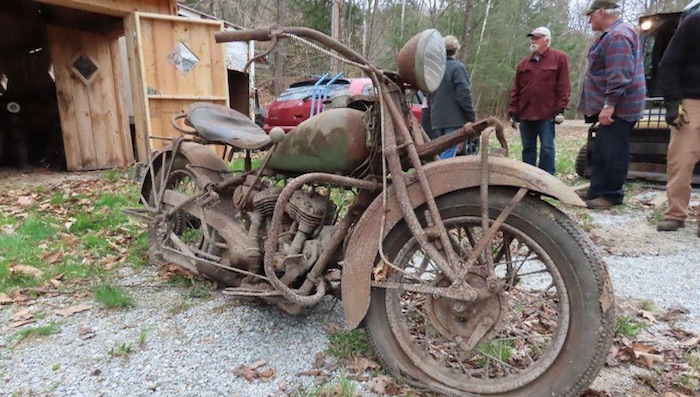 BRANDON, Vt. — It’s hard to keep a secret in Vermont and the latest big secret, well, at least among local fans of classic motorcycles, is the late Bob Bearor’s recently discovered collection of antique Harley Davidson and Indian bikes and motor parts.

Bearor was Vermont’s foremost motorcycle aficionado. Now his “lost” collection has been discovered in a barn located several miles south of Brandon, Vermont.

“This is an amazing story of barn-find motorcycles and parts, vintage Indian and Harley Davidson motorcycle and parts that are right in your backyard,” according to Yvette VanDerBrink of VanDerBrink Auctions in Bennington. “The movie, ‘The Wild One’, starring Marlon Brando, showed images of a biker gang terrorizing a small town in California. The leader of the pack falls for the sheriff’s daughter despite objections from the father. Just like in the movie, Robert Elick Bearor was a bit of a rebel. In fact, he took pride that his initials were close to Rebel- R.E.B.”

VanDerBrink, who will auction off Bearor’s collection next month, said the biker started off driving a logging truck.

“He saw this cute lil’ gal getting off the bus and followed her to where she was working as a waitress. Almost every day he would go in there and Christine (nicknamed Teenie) would ask, ‘what could I get for you?’ Bob would reply. ‘You.’ Bob was a bit of a rebel and rode a motorcycle and had fast cars. Christine’s mother didn’t quite know what to think of him when he picked her up on his Harley and leather jacket. Bob and his “gang” had been known to run around. Bob once droves his Harley into the Cove Point Dance Hall in Leicester and burned out in the middle of the dance floor and the black marks stayed for years. Tennie’s mom finally allowed her to go out with Bob and they dated for five years and got married in a 1958 Chevrolet Corvette. Soon the kids came and Bob sold Casper (his white Harley Davidson motorcycle) to buy their first home. Teenie even learned to ride and they loved riding motorcycles together. She especially likes his Harley because it was so loud and people would look at them and the bike. They had matching riding outfits and loved to ride around to shows and in the Vermont area. Bob was always doing tricks on his motorcycle and quite often Teenie was riding along.” 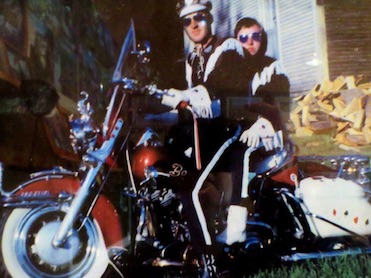 “They started the Tennie Tiny Poultry Farm, so Teenie could stay home with the kids while Bob was running his mail routes,” she said.

There were always motorcycles and classic cars. Teenie figured, Bob did all the work, he deserved the toys. He bought a 1976 Harley Davidson Coney Island M.C. Cruiser.

“It was called Joker and embellished in lights, 1976 silver dollars, and more,” VanDerBrink said. “It was toured to events with a 1947 Indian motorcycle that was supposedly gold plated instead of chrome. Bob would also sell Indian and Harley Davidson trinkets along with setting up the display for the Joker and animals from the Tennie’s Tiny Farm. It was a happy busy life for their family.”

VanDerBrink said that Bearor operated a body shop on his farm and exquisitely painted both motorcycles and automobiles.

“When he was younger, Bob had befriended Ed Flynn in Bennington. Ed was an Indian dealership and Bob and he would talk motorcycles. Bob was the son that Ed never had. Ed Flynn was a bit of a wild man and he and Bob were quite the pair. Mr. Flynn passed away and his widow didn’t know the value of the bikes and inventory and stuff was started to disappear out of the dealership. Bob had a big heart and moved the widow up to one of his houses and took the remaining inventory back to his home. This inventory is still here and is approximately 53 motorcycles, hundreds of parts including NOS, and memorabilia from the Indian dealership. He put the parts, bikes, all over his buildings and in fact even under one of his houses.”

VanDerBrink Auctions, and a group of Vermont motorcycle enthusiasts, unearthed the two Indians, among others.

“Bob loved Indians and Harley Davidson,” VanDerBrink said. “He mostly rode Harley Davidson’s but also enjoyed the history and uniqueness of the Indian Motorcycles. When Indian was going to bring back the Indian brand, they brought a new biker for Bob and his “gang” to test. Unfortunately, it was brought down on their first ride and they got a Harley Ride home. Bob’s mail routes, now were up to seven routes, and Teenie had the poultry farm growing also. They took animals to the Vermont State Fair (in Rutland) and many people came to their farm. There was everything from Russian deer to turkeys and even a fishing pond. Bob’s dad was an avid fisherman and in a wheelchair. Bob got the idea to make a fishing pond and dug one and had it stocked on the farm. His dad now could go fishing anytime. Bob then started open fishing for any veteran, disabled person, and children could fish. The Bearors hosted an annual fishing derby for years and banquet free for fishermen from these groups. Hundreds of people would come out for a great day of fishing. This continued even after Bob’s passing until COVID struck.”

Bearor was eventually diagnosed with kidney disease. He attempted to keep the disease secret from Teenie, but she eventually found the doctor’s letter.

“Like always, he wanted to take care of her and not her taking care of him,” VanDerBlink said. “He passed away at their home with family. Even in the end, he wanted to go for a ride with Tennie on their motorcycle… Now the family has decided to sell his collection. Little did they know what all he had.”

In May, VanDerBrink started to examine Bearor’s collection in an old outbuilding.

The location at the Rutland County farm has no internet connection, no parking and so all the bikes and parts will be moved to the Vermont State Fairgrounds on U.S. Route 7 in Rutland and the auction will be held Saturday, Aug. 14, at 9 a.m.

“There is everything from classic cars, antique tractors, and even a chainsaw collection,” VanDerBlink added, a tad numbed by the scale of Bearor’s treasure. “And of course, the hoard of Indian and Harley Davidson Motorcycles and parts. The auction will be onsite with online bidding, too. Many of the motorcycle parts will be only for onsite bidders. So, it’s best to be at the auction.”

To view the catalog, with hundreds of pictures and videos, see vanderbrinkauctions.com.

One thought on “A rebel with a heart: Biker’s antiques on the auction block”