South Burlington city leaders are pushing forward on a climate action plan that will identify ways to make the city more energy efficient — and are looking seriously at new electric vehicle charging, adding electric bikes to the bikeshare fleet and are considering buying electric mowers.

In the summer of 2017, the city council joined the Vermont Climate Pledge Alliance and promised to meet or exceed the obligations for the United States set forth by the Paris Agreement.

This plan would outline the steps South Burlington should take to reduce its carbon footprint, and make the city more energy efficient. 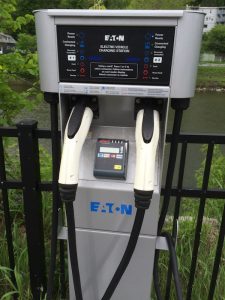 The city of South Burlington is already planning to install car chargers at city hall which should be completed and open to the public in July,

According to Paul Conner, director of planning and zoning, the city council reaffirmed its decision during the winter and are starting to take the first steps, including a funding request to the Regional Planning Commission.

That funding will go towards improving public transportation, since transportation is the largest energy user both in South Burlington and statewide.

“Things like making progress on identifying the sites and moving forward with one or more park and ride locations,” Conner said.

Another strategy to improve transportation would include more car charging stations, and installing them in less obvious places, like apartment buildings and condos.

The city is already planning to install car chargers at city hall which should be completed and open to the public in July, according to project manager Ilona Blanchard.

“The city passed a pay per pass two years ago, which is one cent on the city tax rate over the next 10 years to be able to build out bicycle and pedestrian infrastructure, that’s clearly a specific action that can help meet our transportation climate action goals,” Conner said.

The climate action plan would also upgrade the bikeshare program to have electric-assist bikes.

Keith Epstein, who has been a member of the energy committee since its start in 2008, said there needs to be a communal effort behind the climate action plan in order to make it work.

There are tentative plans to create a task force that includes a broad cross-section of community members including residents, business owners, volunteers, and city employees. This task force would provide input to the city and energy committee on the climate action plan.

“We like to outreach to the public as much as possible to help people understand the benefits of efficiency and renewables and to help answer their questions, for residents or businesses,” said Epstein.

Conner and the planning commission agree.

“For a Climate Action Plan to really be meaningful, it needs a number of key people involved in it, in order for it to really take effect. Writing a plan and then just putting it on a shelf doesn’t necessarily accomplish everything we’re looking for,” said Conner.

The plan is still in the developmental stages and what exactly community input and feedback will look like is uncertain. But, Conner says that there will likely be groups focusing on each individual sector, such as the transportation sector, or the housing sector, and those groups will work on ways to make each sector more energy efficient.

The energy committee has a few other projects in mind to make South Burlington more energy efficient, including replacing some of the city’s gas lawn mowers with electric ones that will reduce carbon emissions, cut fuel and maintenance costs, and have the added benefit of being quieter.

The city hasn’t made any commitments to buy electric mowers yet because there were some concerns with the model that public works employees tried, including the speed and handling of the mowers.

They worked fine for smaller areas but the speed wasn’t as efficient for mowing large areas like Veterans Memorial Park.

5 thoughts on “A push for climate action in South Burlington”