A ruling by a federal appeals court that upheld a Florida school district’s policy of separating restrooms by “biological sex” could be used to bar men from joining women’s sports teams, legal experts told the Daily Caller News Foundation.

In a 7-4 decision on Dec. 30, the 11th U.S. Circuit Court of Appeals rejected a prior ruling by a district judge and ruled that a Florida school board’s policy that required students to use bathrooms that correspond to their biological sex was constitutional and did not violate Title IX, a federal law that prohibits discrimination on the basis of sex. The reasoning of the ruling will be applied to prohibit biological men from competing in women’s sports, legal experts told the DCNF. 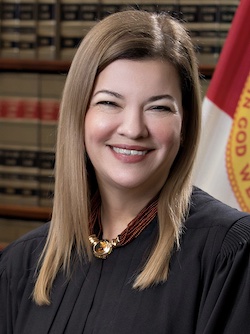 Judge Barbara Lagoa of the U.S. Court of Appeals for the 11th Circuit

“Judge [Barbara] Lagoa, who was the author of the opinion, actually went to the sort of unusual step of also penning her own concurring opinion,” Sarah Parshall Perry, a senior legal fellow at The Heritage Foundation, a think tank focused on creating and pushing policies that focus on individual freedom, told the DCNF. “[She] actually indicated in her concurrence that one of the policy concerns that was underlying all of this was women’s athletics. In other words, this particular outcome, if they had determined that a transgender individual could have access to a bathroom that was in alignment with their gender identity and not their biology, would have what she called ‘consequences beyond the bathroom door’ and chief among those for her point of view, and rightly so, were athletics.”

The decision by the appeals court came after former St. Johns County student Drew Adams, a transgender student who identifies as a boy, sued the school district for their policy of separating restrooms by “biological sex” instead of gender identity. Adams argued that transgender individuals should not be forced to use gender-neutral bathrooms or bathrooms that do not align with their gender identity.

“Under such a precedent, a transgender athlete, who is born a biological male, could demand the ability to try out for and compete on a sports team comprised of biological females,” Lagoa wrote. “Such a commingling of the biological sexes in the female athletics arena would significantly undermine the benefits afforded to female student athletes under Title IX’s allowance for sex-separated sports teams.”

In 2021, Republican Florida Gov. Ron DeSantis signed the “Fairness in Women’s Sports Act” into law which states that individuals must compete on sports teams on the basis of biological sex.

A Broward County middle school transgender student who identifies as a girl challenged the law in an effort to join female sports teams but U.S. District Judge Roy Altman issued a stay on the lawsuit pending the decision of the Adams case, according to the Tampa Bay Times.

The ruling and concurring opinion by Lagoa gives hope to female athletes who are taking legal action in an effort to prohibit biological men from competing in women’s sports, Christiana Kiefer, senior counsel for Alliance Defending Freedom, a legal organization committed to protecting the “sanctity of life,” told the DCNF.

“What the court essentially did say was ‘Yes, Title IX protects on the basis of biological sex. It is a real thing. And it’s something that deserves to be protected,’” Kiefer told the DCNF. “It also said that it protects on the basis of biological sex and not gender identity. As a result, athletes, not just in the 11th circuit, but across the country can point to this and say this is a really hopeful sign that their protections under Title IX will be affirmed eventually as well.”

Because Lagoa went to the length of explaining the harms of allowing men compete in women’s athletics, the ruling will be expanded in new and current litigation to show Title IX protects on the basis of biological sex, not gender identity, Perry told the DCNF.

“She went to pains to be able to describe the distinction between males and females physiologically, the advantages that men have over women and ultimately discuss the fact that this would be undoing 50 years of progress, when in fact, Title IX itself was considered by many to be sort of a crowning achievement for the Women’s Liberation Movement,” Perry told the DCNF. “So in the end, it’s just simply common sense, but a very good outcome because again, though it was limited only to the bathroom issue, it will naturally be expanded and applied in other contexts to include a sports issue once we see more of these legal challenges start to bubble up.”

4 thoughts on “A federal ruling on transgender bathrooms could apply to women’s sports, legal experts say”